Pollard fifty not enough to save Tridents 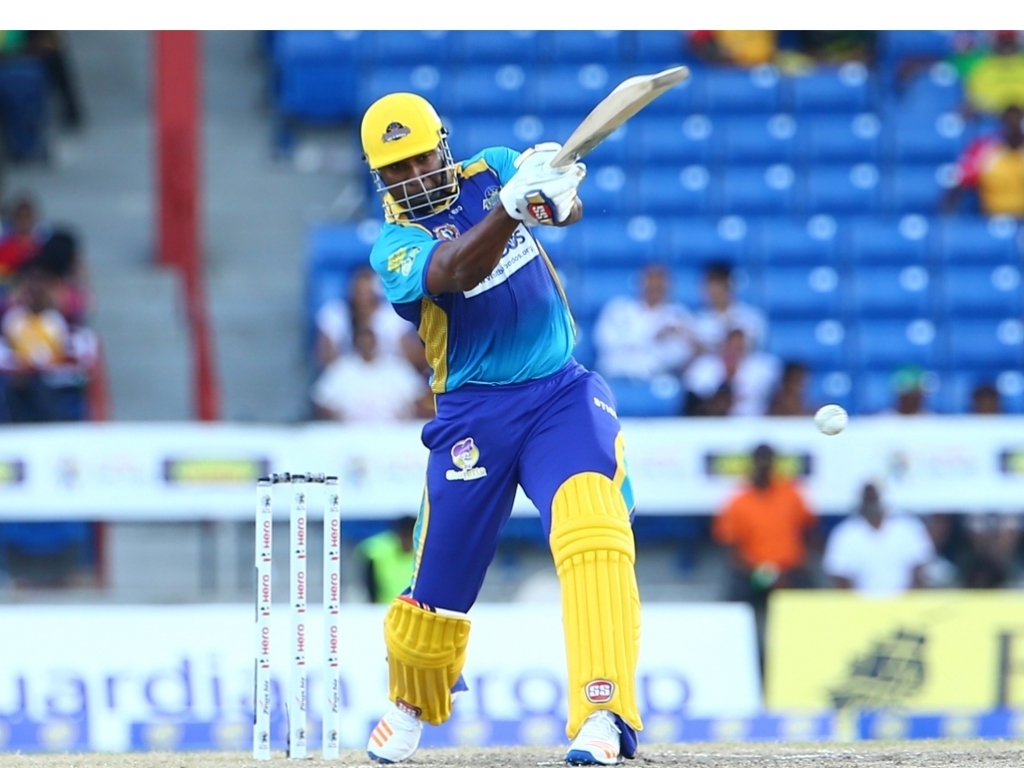 The St Kitts & Nevis Patriots pulled four points clear of the Barbados Tridents in third place of the CPL table with a comfortable victory in Match 16.

An underwhelming start to a defense of 169 by the Tridents meant the Patriots were 84 for 1 after 9.3 – and 17 ahead of the Duckworth-Lewis-Stern par score when tropical rains brought an early end to the match.

The Tridents batted aggressively through the Powerplay, scoring 51 runs, but lost three wickets as well. Both Kane Williamson and Smith were caught attempting to hit consecutive boundaries – Williamson picking out deep square leg and Smith mis-timing to mid-on. In between those two dismissals Christopher Barnwell was trapped leg before wicket by a ball that skidded on from Samuel Badree who finished with figures of 2 for 27.

After the Powerplay the Tridents were quickly four down as some poor running and excellent fielding saw Akeal Hosein run out, leaving the Tridents 62 for 4.

Following a brief period of consolidation Shoaib Malik was dismissed too as he looked to accelerate the innings in the 13th over by taking on a Hasan Ali short ball. He could only top edge the shot which was well caught by Mohammad Nabi at fine leg despite a swirling wind.

With Malik’s dismissal the pressure on Kieron Pollard to elevate the Tridents to a competitive total increased. Seemingly aware of the additional responsibility Pollard took care against the spin of Nabi, who finished with 0 for 23 from his four overs.

However, against the medium pace of Carlos Brathwaite and the pace of Hasan Ali, Pollard showed clear intent to capitalise and hit cleanly and powerfully with the wind to lift the Tridents in the latter stages of their innings.

Pollard’s power was on full display as he hit six sixes and just one four in his unbeaten 63 off just 40 balls. Nicolas Pooran also hit two sixes in a useful 14-ball cameo. The Patriots dared to bowl the spin of Tabraiz Shamsi at the death and the last over cost 15 runs, meaning the Tridents scored 75 runs off their last six overs and finished with 168 for 6.

Only three scores lower than 168 had ever been defended at Basseterre and the Patriots were given an early boost by a first over in which the first five balls from Hosein were all wides. When Hosein finally discovered his radar Evin Lewis stuck a straight six down the ground only to be dismissed off the last ball of the over, top edging another leg side delivery.

The rest of the Powerplay brought no let up in the scoring rate as Gayle and Mohammad Hafeez took the Patriots to 59 for 1 after six overs with 18 of them coming from six balls bowled by Wahab Riaz.

The field dropping back could not stem the flow of runs and two more boundaries lifted the Patriots to 84 for 1 after 9.3 overs when the rain begun to fall.