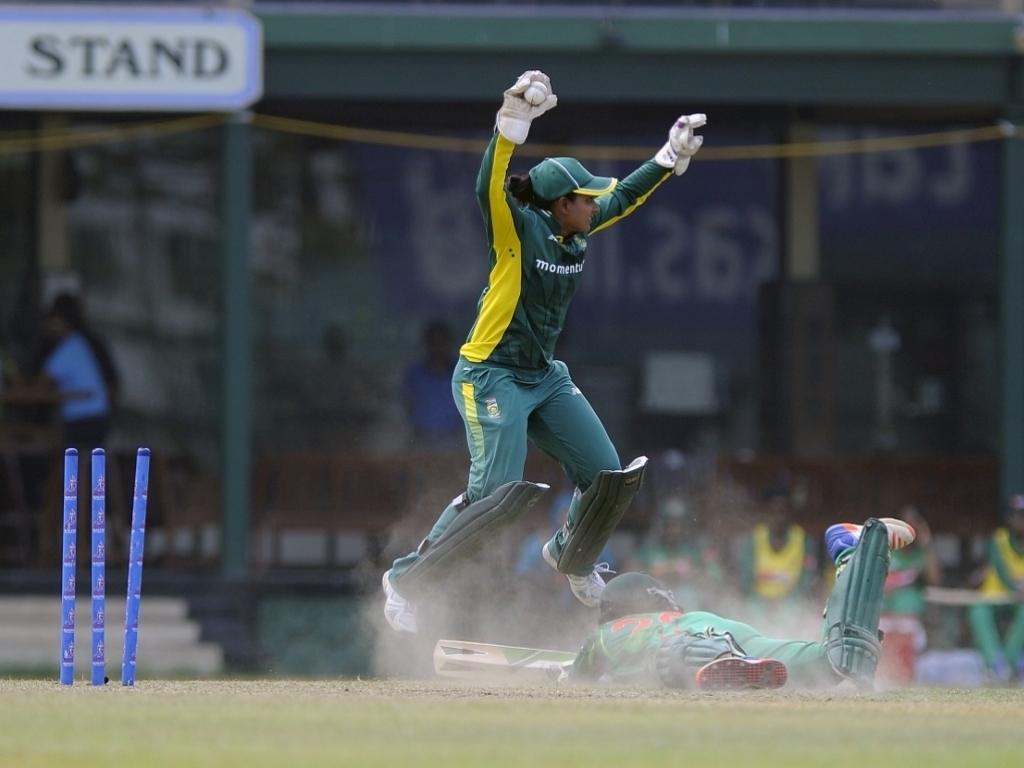 South Africa defeated Bangladesh by six wickets on Saturday to book a place in the Super Six stage from Group B of the ICC Women’s World Cup Qualifier 2017.

Hosts Sri Lanka and Ireland moved closer to the next round with their second wins in Group A.

Pace bowler Shabnim Ismail set the ball rolling for group favourite South Africa with an early wicket to set the tone for a third consecutive victory in the 10-team tournament from which four will qualify for the ICC Women’s World Cup 2017 and the ICC Women’s Championship, while all entrants to the Super Six stage will be assured of ODI status for the next four-year cycle.

Ismail got rid of Sharmin Sultana with the third ball of the innings, brilliantly caught by captain Dane van Niekerk in the slips as she dived to the right. Ismail’s new-ball partner Marizanne Kapp dismissed other opener Sharmin Akhtar and Ismail accounted for Fargana Hoque as Bangladesh lost all three batters without scoring and was reduced to eight for three in the fifth over.

It was very difficult for Bangladesh to recover in the face of some attacking bowling and tight fielding. Captain Rumana Ahmed’s determined 39 off 93 balls could only take the score to 100 off 46.5 overs. Player of the match Ismail finished with three for 14 while leg-spinners Sune Luus and Dane van Niekerk shared five scalps.

Bangladesh had the satisfaction of taking four wickets but South Africa still cruised to its target in only 25.2 overs with Lizelle Lee (34) and Laura Wolvaardt (30) the main scorers.

South Africa’s last match is against Papua New Guinea on Monday, when the matches resume after a day’s gap.

Shabnim Ismail: “It was a good toss to lose because we got a lot of help from the pitch early on. The ball was seaming a lot in my first three overs but during my second spell there was no help, so I used a lot of variations with my slower balls. The momentum is with our team and we want to keep going like this and through to the ICC Women’s World Cup 2017.”

Another match in the same group was a close affair as Scotland defeated Papua New Guinea by seven runs.

Pace bowler Pauke Siaka helped restrict Scotland to 169 in 50 overs with a haul of six for 19 that included those of the two top scorers – Rachel Scholes (35) and Elizabeth Priddle (31).

Papua New Guinea was 139 for six after 46.5 overs but Kari Anderson, Priyanaz Chatterji and Kirstie Gordon shared the last four wickets to stifle the chase. Brenda Tau (46) and Tanya Runa (32) were the notable contributors for the losing side.

Meanwhile, host Sri Lanka and Ireland closed in on Super Six berths with India having already qualified from Group A.

Equations could come into the picture only in the unlikely scenario of Zimbabwe beating India and Sri Lanka losing to Thailand, in which case Sri Lanka, Ireland and Zimbabwe will all be tied on four points.

Captain Inoka Ranaweera grabbed four for 18 with her left-arm spin to help dismiss Zimbabwe for 149 in 50 overs while experienced batters Chamari Athapaththu (58) and Prasadani Weerakkody (33 not out) took the team to its target with over 13 overs to spare.

Inoka Ranaweera: “This was an important win, and I’m glad the entire team delivered. Chamari coming to form was important for us, hope she gets better from here. She is one of the top players of the world. We hope to continue doing well in the next game against Thailand. As for me, I focussed on sticking to the right line and length today.”

All-rounder Kim Garth missed out on a century as she was run out off the penultimate ball of the innings for 98 with nine fours and one six. She added 106 runs for the third wicket with captain Laura Delany (50) to boost the score to 218 for seven.

Thailand fought bravely to score 172 for nine with Narraya Boochatham (44) and captain Sornnarin Tippoch (42) getting the bulk of the runs. Medium-pacers Lucy O’Reilly (three for 28), Amy Kenealy (two for 12) and 37-year-old leg-spinner Ciara Metcalfe (two for 25) helped complete the win.