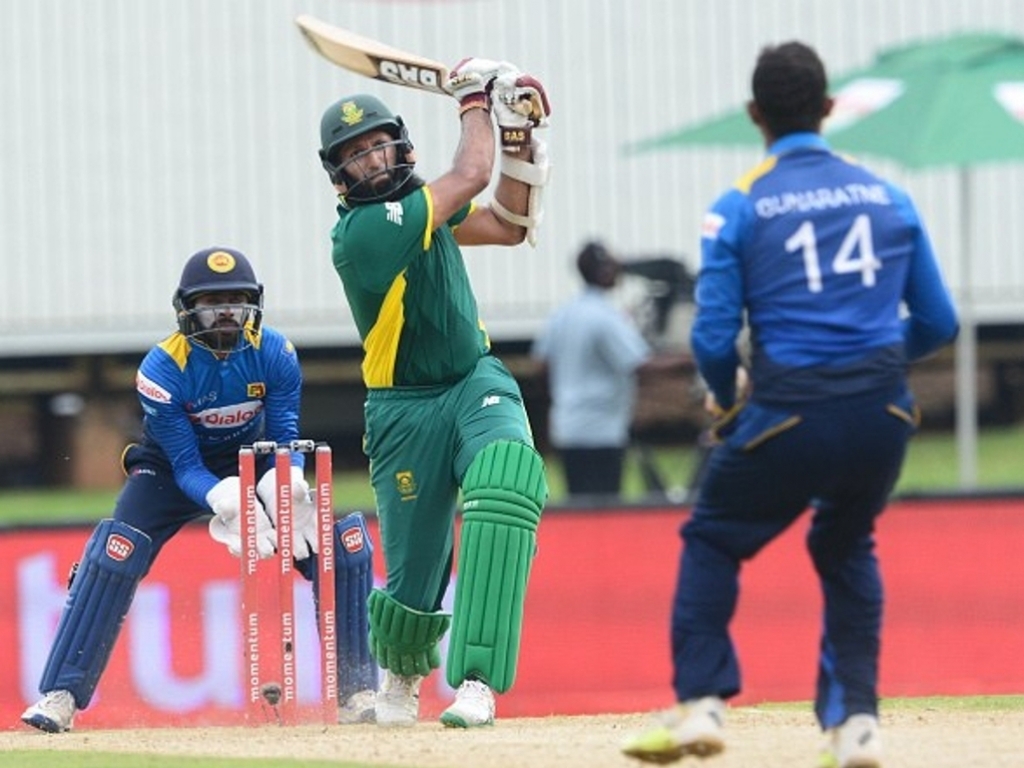 South Africa beat Sri Lanka by 88 runs in the fifth and final ODI to complete a 5-0 series whitewash and move to the top of the ICC ODI rankings.

The Proteas posted a daunting total of 384 for 6 thanks largely to centuries from openers Quinton de Kock and Hashim Amla.

De Kock was the early aggressor becoming the fastest wicketkeeper to reach 3,000 runs in ODI cricket on his way to 109 off just 87 balls as he and Amla put on 187 for the opening wicket.

It was the 27th over when Sri Lanka finally broke through with Suranga Lakmal having de Kock caught at cover shortly after he had scored his 12th ODI ton.

Amla would continue to tick along as Faf du Plessis came in and moved quickly to 41 while benefiting from a dropped catch when he had scored 25.

Du Plessis was looking to be hyper-aggressive on a very good Supersport Park pitch but tried one shot too many and holed out to long-off off the bowling of Lahiru Madushanka.

Ab de Villiers looked good for his 14 before he hit an ambitious aerial cover-drive into the wind as was caught off the bowling of Jeffery Vandersay.

JP Duminy (10) didn’t really get going and ended up being dismissed in bizarre fashion as the ball struck him on the thigh before rebounding into his bat and looping to keeper Niroshan Dickwella to give Lakmal his second wicket.

When Farhaan Behardien made his way out to the crease Amla decided to put his foot down and the pair would add 62 runs before the latter holed out in the penultimate over of the innings to leave South Africa 371 for 5.

Amla smashed an incredible 154 runs off 134 balls including no fewer than five sixes and represents his highest score at Supersport Park.

Behardien (32) fell in the final over chasing a big finish leaving Wayne Parnell (1 not out) and Chris Morris (3 not out) to finish the innings.

In response Sri Lanka found themselves in trouble early on as skipper Upul Tharanga (7) hit a Morris ball straight to Kagiso Rabada at third man to leave the tourists 25 for 1 in the fourth over.

Kusal Mendis (1) didn’t last long before cracking one straight to de Villiers at mid-off to give Morris his second.

Dickwella blazed his way to 39 off just 19 balls but couldn’t stay in for the long haul as he too miscued one to de Villiers at mid-off of the bowling of Parnell.

Sandun Weerakkody (10) and Dhananjaya de Silva (11) fell cheaply and Sri Lanka must have felt the game was gone at 82 for 5.

Asela Gunaratne and Sachith Pathirana put on a stand that would lend some respectability to the Sri Lankan score.

Pathirana scored 56 off 62 balls as he and Gunaratne added 93 for the sixth wicket before he became Morris’ third victim with de Villiers bagging the catch again.

Madushanka (7) and Vandersay (7) could offer little resistance to the Protea juggernaut and both fell in quick succession with the game all but lost already.

Gunaratne though was eager to play the best innings he could and as South Africa entered the comfort zone with victory pretty much nailed down he smashed Behardien for four consecutive fours including a cheeky reverse sweep.

The allrounder started off playing well within himself but as the match drew towards a close he accelerated perhaps sensing that a century was on the cards.

Gunaratne smashed an audacious slog sweep off Rabada to move him from 90 to 96. He and Lakmal set out their stall to bat out the fifty overs for what would be the first time in the series for Sri Lanka.

The 31-year-old Gunaratne went to his maiden ODI hundred off 106 balls, his previous best had been a score of just 38.

Gunaratne would end unbeaten on 114 while Lakmal managed 20 not out.

The pick of the Proteas bowlers was Morris with his figures of 4 for 31 from his ten.