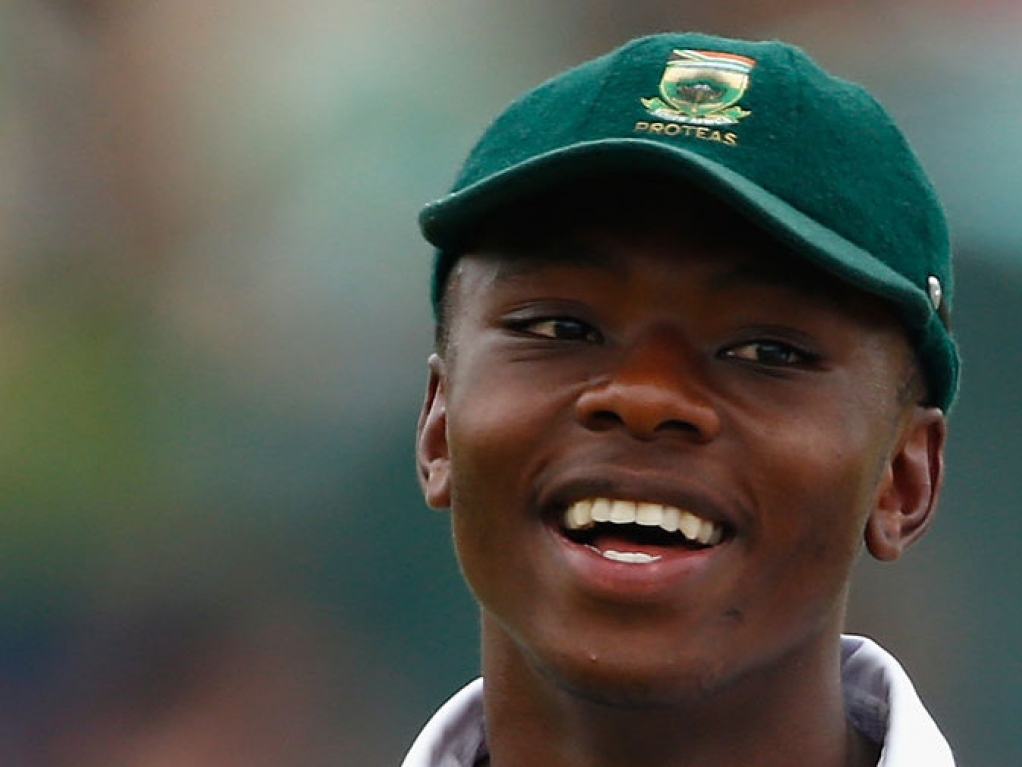 Fast bowler Kagiso Rabada continued his rise to prominence as he took seven wickets as the Proteas bowled England out for 342 on day three of the fourth Test in Centurion. The hosts reached 42 for one at stumps for a lead of 175.

The 20 year-old Rabada (seven for 112) worked his way through the English batting line-up to dismiss the visitors after tea and secure a valuable 113-run lead.

Alastair Cook (76) was only able to get nine runs closer to the 10 000-run milestone (he now has 9951) before he nicked off to Morne Morkel but it was from the other end that things were becoming increasingly interesting.

Rabada had snared Alex Hales and Nick Compton the previous evening and he was visibly hungry for more scalps as he gently ran in to Joe Root (76) early under heavy skies and after a night where over an inch of rain had fallen.

Root got the first few punches in but after three consecutive boundaries, during Rabada's second spell, he got a good-length ball to move away enough to kiss the outside edge of his bat and Quinton de Kock would make no mistake with the catch behind the stumps.

In his next over he picked up the wickets of both James Taylor (14) and Johnny Bairstow (0) by the same method and England were suddenly reeling at 211 for six.

A mere 45 minutes before Rabada's golden spell of three for three in four overs, England had been sitting comfortably on 177 for two.

In the afternoon session Ben Stokes (33), Moeen Ali (61) and Chris Woakes (26) fought hard to avoid the follow-on and then attempt to keep the lead to something manageable.

Moeen showed how he might be wasted at number eight as he ran out of partners and was hurried into a loose shot when the tourists were nine down.

After a shining start to his limited-overs career, Rabada played his first Tests in India on pitches that were far more suited to spin bowling and, while he took to the game well, it was only in the previous Test in this series, at the Wanderers, that he claimed his first five-fer and he made his place in the attack his own.

After today's magnificent effort boasted speed, control and guile and the 20 year-old athlete is being hailed far and wide as the successor to the injured Dale Steyn, whose star is on the wane.

And the fact that he is a black African will please the often interfering politicians. South Africa's minister of sport, Fikile Mbalula, tweeted today that "The nation swells with pride at your remarkable performance."

Rabada has never been picked as a quota player – it is well known that he is a very special bowler. If anything, he has been held back slightly in an attempt to manage the star carefully.

His haul of seven wickets equals the highest number of victims in an innings at Centurion and ironically the only man who has equalled that feat while conceding fewer runs is Kyle Abbott, who suffered a hamstring injury after lunch.

Abbott's further involvement in the match is unknown but it would be surprising if he is able to bowl many second-innings overs. This leaves South Africa with only two seam bowlers and one of those, Morkel, hasn't looked at his best.

The hosts will look to bat until around tea on the penultimate day and set England an improbable 400-plus fourth innings target.

Play is scheduled to start at the curious time of 10.04am (08:04am GMT) local time on the fourth day in an attempt to make up for overs lost to a 15-minute shower soon after lunch today. Cricket is indeed a funny game.