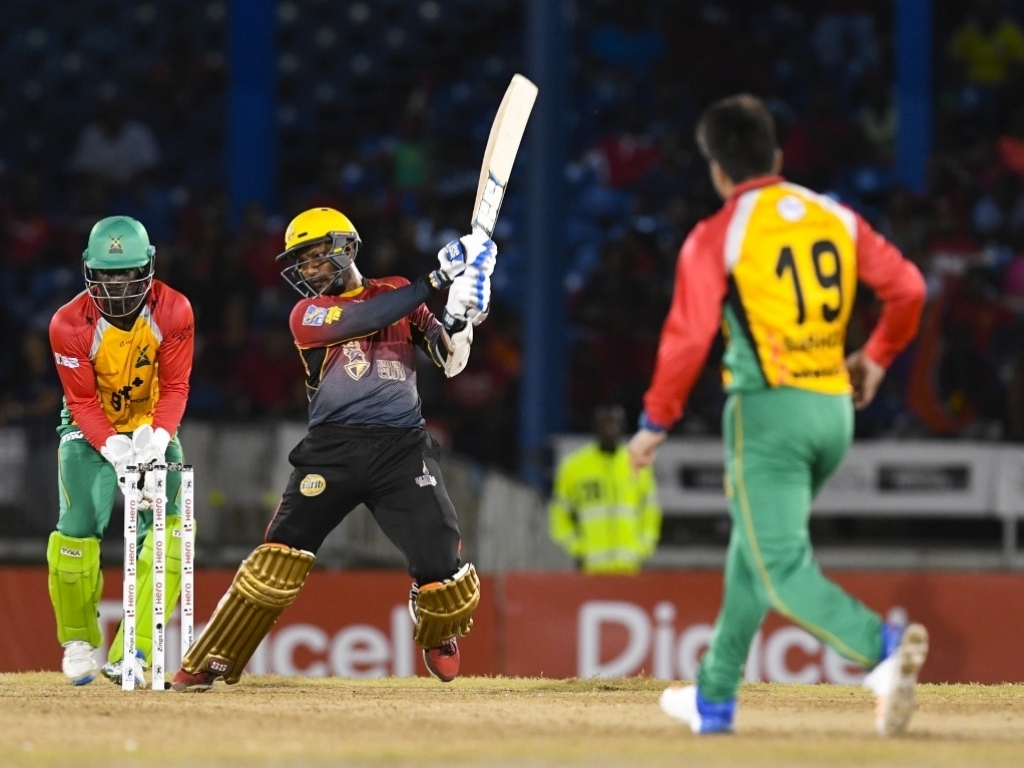 An assured team performance from the Guyana Amazon Warriors produced a six-wicket victory against St Lucia Stars in Match 12 of the 2017 Caribbean Premier League (CPL).

After pulling the Stars back from 91 for 2 to 152 for 8, a calm cameo from Gajanand Singh guided the Amazon Warriors to the target, despite a late blip which took the match deep into the last over.

After winning the toss and electing to bat the Stars innings was given a quick start by Johnson Charles and Andre Fletcher. Fletcher only lasted eight balls however, before being beaten for pace by a back of a length ball from Sohail Tanvir.

Fletcher’s demise did not seem to perturb his partner Charles who clattered a four and a six off the two balls immediately after the wicket and then hit an enormous Hero Maximum off Rayad Emrit which bounced off the roof of the stadium and down the road.

A scratchy innings of 2 off 7 balls by Marlon Samuels was ended with a top-edged pull off Emrit and a tight sixth over, bowled by Rashid Khan meant the Stars ended the Powerplay 47 for 2.

Two driven fours from Shane Watson gave the innings fresh impetus before Charles tore into some full tosses from Keemo Paul, taking the 9th over for 21. At the half way stage the Stars were 90 for 2, thanks largely to Charles who batted with typical belligerence, muscling the ball across the line, scoring 50 of his 53 runs on the leg side.

His dismissal off the second ball of the tenth over by Rashid Khan changed the complexion of the innings. Kamran Akmal was stumped for 2 off 4 balls, charging down the pitch to Khan. Some tight overs and two more wickets – Watson for 32 and Kyle Mayers for 1 meant the Stars had lost 4 for 19.

More quiet overs followed as Darren Sammy and Rahkeem Cornwall struggled to get the ball away, particularly from Rashid Khan who finished with 2 for 9. With 12 balls remaining the Stars were just 122 for 6.

Those 12 balls brought the Stars 30 runs as Sammy finally found his range, slamming two sixes over mid-wicket and one straight before he was dismissed looking for a fourth for 26 off 24 balls. The Stars finished with 152 of 8 – well below the two previous first innings at this venue of 196.

Chadwick Walton gave the Amazon Warriors chase a frantic beginning by hitting four boundaries in the first two overs. However, the Stars pulled things back in the next three overs, conceding just 15. After Walton was dismissed by a good short ball from Jerome Taylor the Amazon Warriors ended the Powerplay 42 for 1 with Martin Guptill being kept quiet on 4 off 12.

Once the field dropped back the Stars bowled accurately, giving the Amazon Warriors very few boundary balls. After a brief but unspectacular partnership, Babar Azam was caught and bowled by Shane Shillingford for 12 off 14. At the halfway stage the Amazon Warriors required 84 more runs to win.

When Guptill was eventually dismissed, well caught at deep point by Samuels off the bowling of Mayers, the Stars will have sensed a way back into the match.

Although the required run rate of 8.93 was not steep it required an acceleration that the Amazon Warriors had shown little sign of giving.

It did however eventually come with 48 required from 30 balls as Jason Mohammad and Gajanand Singh took Shillingford’s final over for 16 putting them back in charge of the contest. A brilliantly flicked six and two slapped drives from Gajanand further reduced the equation.

Despite the boundaries the Amazon Warriors never truly pulled away and a tight penultimate over from McClenaghan ended with the wicket of Mohammad and left them requiring 8 from the last over. After only two runs came from the first three balls, bowled by Sammy, the Stars had come from nowhere to stand on the brink of winning. Roshon Primus’ heaved four and a scampered two ensured that didn’t materialise and the Amazon Warriors recorded their first victory of the season.