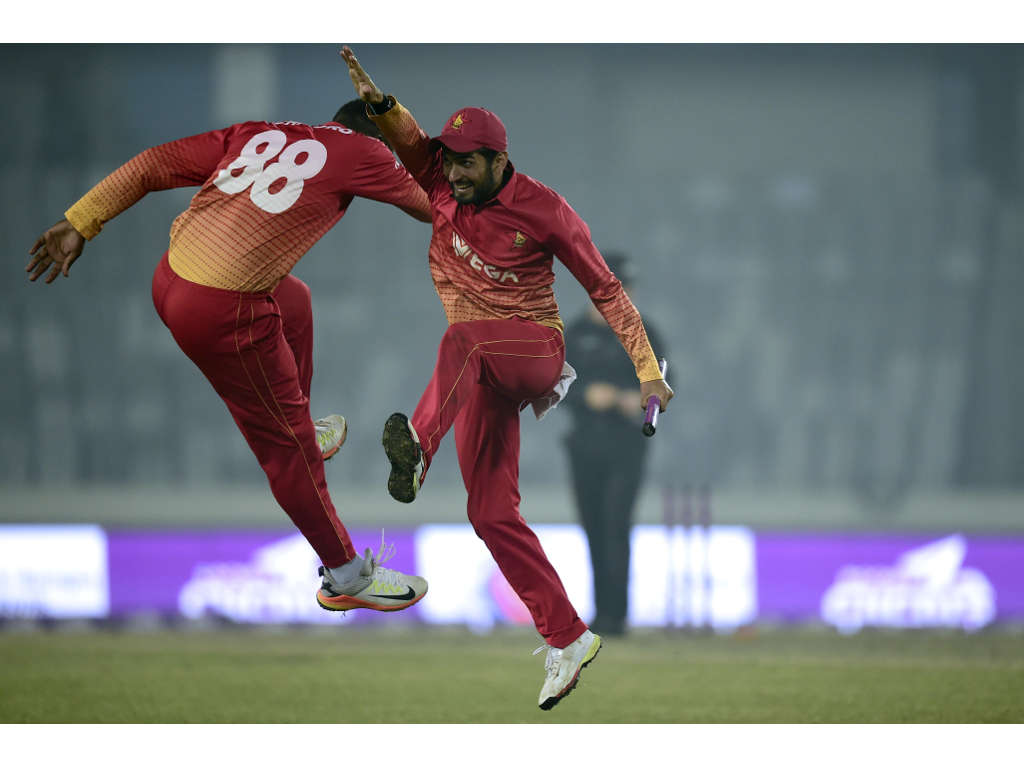 Sikandar Raza and Tendai Chatara starred as Zimbabwe bounced back from an opening defeat to Bangladesh with a confidence-boosting victory over Sri Lanka in the ODI tri-series.

Raza smashed 81 from 67 balls to add the finishing touches to foundations laid by Hamilton Masakadza (73) in Zimbabwe’s 290/6, with Chatara then taking 4/33 to bowl Sri Lanka out for 278.

Despite being comprehensively beaten by the hosts in the series-opener, the form of Raza gave Zimbabwe hope they could improve their fortunes against a Sri Lanka side looking for stability following a chastening tour of India.

And the all-rounder didn’t disappoint, smashing eight fours and a six to provide the late acceleration after Masakadza, Solomon Mire (34), Brendan Taylor (38) and Malcom Walker (29) had all contributed.

While Zimbabwe’s impressive first-innings score owed a lot to Raza, it was also built on solid partnerships, with 75 runs put on for the first wicket, 57 for the third and fifth wickets and 61 for the sixth wicket.

#SLvZIM – FIFTY! @SRazaB24 with a run-a-ball 50! And that's his second in this series and 10th in his 72nd ODI! Absolutely awesome, Raz! #TriSeries pic.twitter.com/RQknIsXkyR

Thisara Perera impressed with 2/43 from his 10 overs, while medium-pacer Asela Gunaratne took 3/37, but following Raza’s hitting – which saw 48 runs come off the last four overs – Sri Lanka knew they had their work cut out in the run-chase in Mirpur.

That proved to be the case as the side ranked eighth in the ICC ODI rankings succumbed to their opposition, who sit two places lower.

Opener Kusal Perera (80 off 83 ball) provided a strong start, putting on 85 with captain Angelo Matthews (42), but Perera fell to Player of Match Raza and Matthews was dismissed soon after to leave Sri Lanka 157 for 4, with a lot to do in the final 20 overs.

A thriller! Zimbabwe hold their nerve to beat Sri Lanka by 12 runs and win Match 2 of the Tri Series.https://t.co/baLHqKsgN6 #SLvZIM pic.twitter.com/TQh2QobNhV

Dinesh Chandimal (34) was bowled by Kyle Jarvis (2/56), leaving the task to the middle and lower order. Thisara Perera did his level best with 64 from 37 balls, threatening to snatch a win, but he tried to go big one too many times and was caught in the deep by Raza off Chatara in the 47th over. Last man Dushmantha Chameera was then dismissed with 11 balls to go, giving Zimbabwe a well-deserved win.

Defeat means Sri Lanka have now lost their last six matches in all formats, with their last win coming in the first ODI against India on 10 December. It also sees Zimbabwe continue their good form against Sri Lanka, having won the five-match ODI series between the two sides in Zimbabwe 3-2 over June and July 2017.

Sri Lanka face Bangladesh next in Dhaka on Friday before a re-match between these two sides on Sunday.