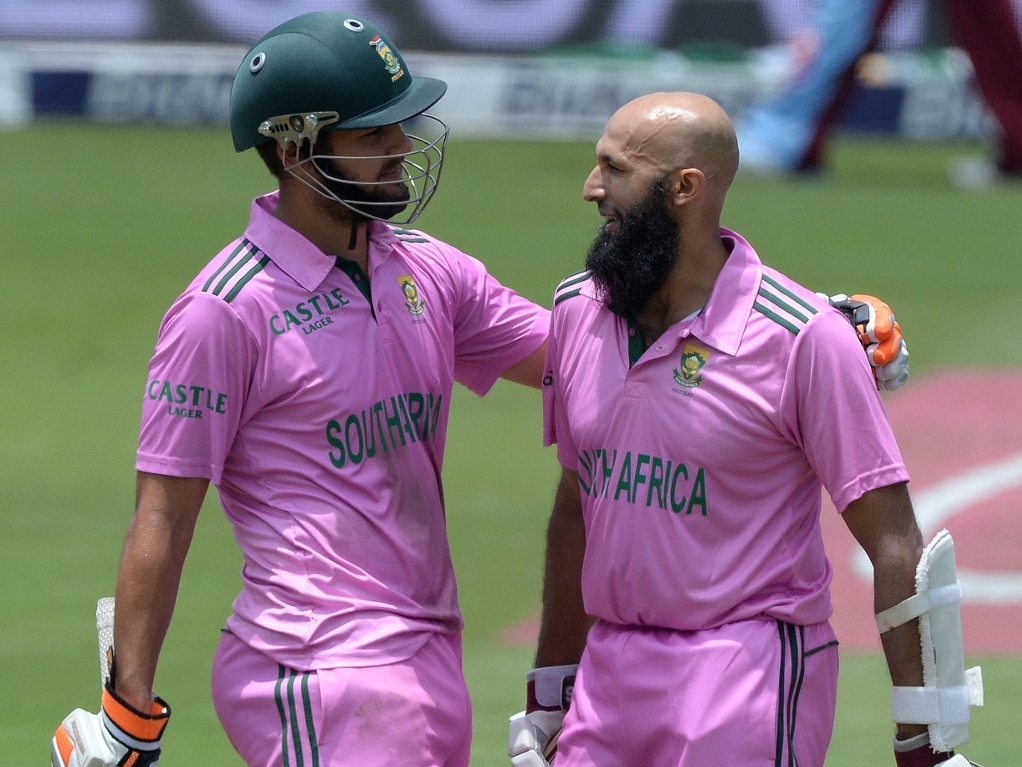 Plenty of ink was needed to rewrite the record books as AB de Villiers (149 off 44 balls) pulverised the Windies attack to score the fastest ever ODI fifty and hundred, and take his side to 439 for two, just four runs short of the highest ever score in 50-over cricket.

South Africa could not bowl their opponents out but sauntered, in their pink breast cancer awareness strip, to an easy 149-run win. The Windies reached 291 for seven in their reply.

It was by no means a one-man show – it's virtually inconceivable but De Villiers only strode to the crease with under 11 overs to go. The best batsman in the world scored 149 runs in his share of only 10 overs before he holed out in the final over of the innings.

His knock was the most ruthless the game has ever seen as he smothered the ball to all corners of the leafy Johannesburg suburb. It was an effort so astonishingly superhuman that the only time the crowd was stunned in disbelief were the four occasions that he was on strike and no run was scored.

The wicketkeeper-captain struck nine fours and 16 sixes and brought up his hundred in 31 balls, which was five balls quicker than New Zealand's Corey Anderson against the same team in 2014.

South Africa's openers Riley Rossouw (128 off 115 balls) and Hashim Amla (153 not out off 142 balls) started carefully but gained momentum and each chalked up personal bests as they did a lot more than set up a perfect platform by putting together 247 runs for the first wicket. The partnership is the Proteas highest in ODIs and is the second highest in the history of the format.

It would be very easy to simply dismiss the West Indian efforts in the field as ridiculously poor but it takes a lot more than bad bowling and fielding to translate into a 400-plus score. Amla and Rossouw were chanceless as they ground away at the tourists' willingness to fight.

The sellout Wanderers crowd of 34 000 fans in pink cheered every run with enthusiasm as the Windies' fielders' shoulders dropped then drooped as they all but gave up and went through the motions. When Sulieman Benn finally caught Rossouw in the deep to break the massive partnership the visitors experienced only a false sense of relief because de Villiers' sublime power hitting to follow would prove far less forgiving.

In the last five overs of the innings the stadium disc jockey was playing a new track just about every ball, whenever boundaries were struck. The crowd, feeling more exultation at being a part of the spectacle than sympathy for the poor Windies' plight, was agog with frenzy as shots that defied physics brought music and hysteria and the Wanderers erupted with pink lava.

The Wanderers was, only one week before, host to the highest ever Twenty20 chase of 232 and is known to be the highest scoring major international ground there is. It is also the venue where the highest ODI score was chased, when South Africa bettered Australia's 434 in 2006.

Chris Scott has been the groundsman here for some 43 years and he sure knows how to produce a high scoring wicket – today would prove no different on this veritable bowlers' graveyard as 730 runs were clobbered in 100 overs.

The 23-year-old Jason Holder would have known that he was handed the captaincy at a challenging time for the West Indies but the poor lad was discombobulated at best in the bullring . When AB de Villiers is on song it almost doesn't matter who bowls and what field you set, but it was puzzling that part-timer Dwayne Smith (0-68) was given four overs when the experienced ex-captain Darren Sammy (0-26) had gone for only a run a ball. In life we learn by precept or by bitter personal experience.

The Windies made a fist of the reply but losing Chris Gayle (19) early in the chase had an instantly demoralising effect on the whole batting order. At 231 for four in the 37th over their run-rate worm was in line with South Africa's at the same stage but there was no man to come who could match de Villiers feat – probably because there is no man who ever will, unless the game changes drastically. 149 from 44 balls is like a handy innings plus an instant 100-run bonus.

Gritty knocks from Dwayne Smith (64) and Dinesh Ramdin (57) helped their side to 291 for seven, a score of which they should not be embarrassed. With wickets falling regularly, and weak links like Leon Johnson scoring only 1 run from 15 balls, the asking rate grew at an exponential rate to beyond the achievable.

Each of the South African bowlers chipped in with contributions but Dale Steyn (2-29) went at only three runs per over, which was extraordinary given the conditions.

South Africa take a 2-0 lead in the five-match series that is the last either of these sides will contest before going to the World Cup Down Under. The next fixture is a day/night game in East London on Wednesday.