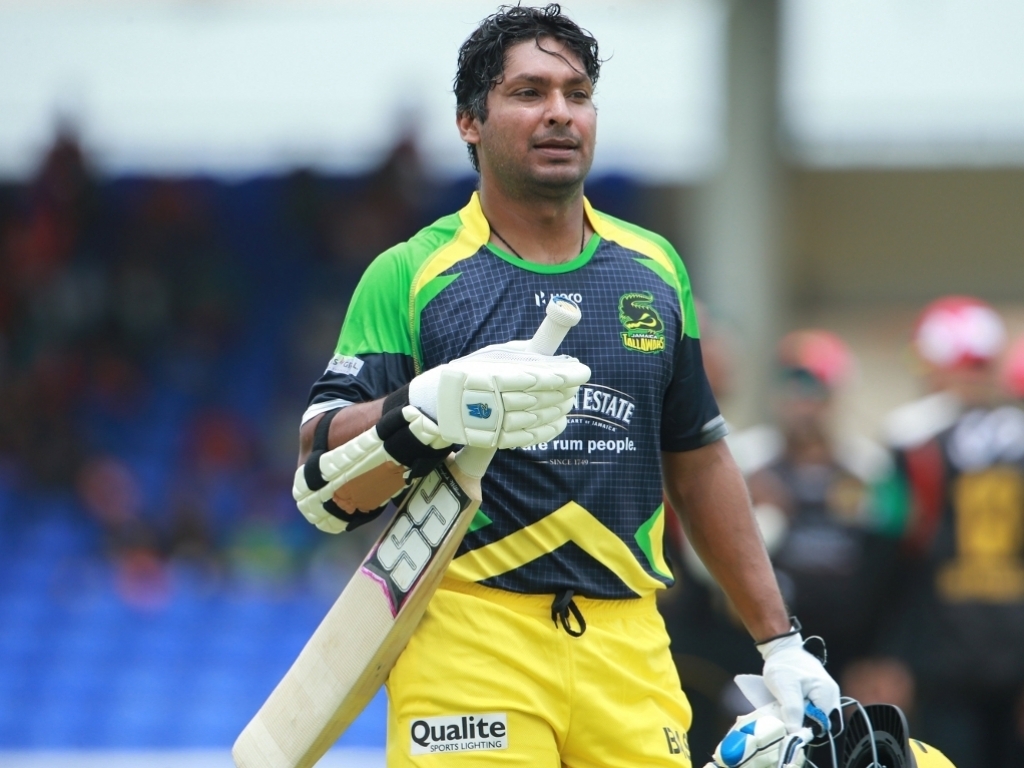 A calm fifty from Kumar Sangakkara guided Jamaica Tallawahs to a six victory against St Lucia Stars in Match 23 of the 2017 Caribbean Premier League (CPL).

Sangakkara’s unbeaten 74 marshalled the Tallawahs to a venue-record run-chase as they surpassed the Stars’ innings of 172 for 8, who had Shane Watson’s 80 to thank for their imposing total.

Sangakkara was fortunate to be dropped twice, but his composure helped negotiate a steep chase in which the run rate climbed to nearly ten runs per over.

The Tallawahs run-chase was given an early boost by the inaccuracy of the Stars bowlers who delivered six wides in the first 2.3 overs, costing 14 runs.

Lendl Simmons hit one magnificent straight six before he was trapped lbw by a full straight ball from Jerome Taylor. Some quick footwork and two straight sixes from Glenn Phillips helped lift the Tallawahs to 52 for 1 after six overs.

Aside from those two sixes and a four, Phillips struggled to rotate the strike and was eventually bowled by Rahkeem Cornwall, chopping onto his stumps.

Cornwall bowled brilliantly, maintaining a tight line and a pace that extracted turn and bounce from the surface. His four overs, which cost just 20, increased the required rate to 9.25 by the end of his spell with Sangakkara and Andre McCarthy being forced to work hard for their runs.

A period of sloppy play from the Stars then released the pressure. After Sangakkara manufactured a four off Watson, he was gifted another by Kyle Mayers.

Three simple dropped catches within seven balls, two of Sangakkara and one of McCarthy were also missed. Two brilliant straight sixes from those batsmen then put the Tallawahs in charge once more, requiring 33 off 24.

Despite McCarthy falling to Watson for a composed 36 the Tallawahs had no problems in getting over the line with Sangakkara punishing some errors in length and Rovman Powell clubbing a huge six. The victory takes the Tallawahs four points clear of fourth place and in a good position to qualify for the play offs.

Earlier in the evening the Stars were put into bat and promoted Rahkeem Cornwall to open. The move was well-intentioned but didn’t work. After a tight start from the Tallawahs, Cornwall failed to pick a Krishmar Santokie slower ball and was caught at long off.

The control of the Tallawahs pace bowlers forced Andre Fletcher to attack the first over of spin in the last over of the Powerplay. When Gary Mathurin cleverly held the ball back Fletcher mis-timed it to long on to leave the Stars 35 for 2 after six. Three overs later Marlon Samuels fell too, when he heaved across the line against Kesrick Williams and was bowled.

A partnership of 41 off 30 balls between Shane Watson and Johnson Charles finally gave the Stars innings some impetus.

It was a partnership that owed a considerable amount to fortune with Tallawahs dropping three straightforward chances in the field: Watson twice and Charles once. The drop of Charles was not too costly, with him picking out mid-wicket off Mathurin shortly after for 20 off 18. Watson however, made the Tallawahs pay.

After a hesitant start took Watson to 23 off 20, an emphatic pull shot for six off Williams seemed to get him going. Watson was quick to pick up length and peppered the leg side boundary as he reached his fifty off 30 balls. With four overs remaining the Stars were 130 for 4 and the match was finely poised.

Consecutive sixes off Mohammad Sami by Watson helped take 14 from the 17th over. The wicket of Darren Sammy, duped by a slower ball from Williams, set the Stars expectations back but Watson continued on unperturbed, striking another pulled four and a brilliant straight six before falling to a slower ball from Santokie.

A huge six from Kyle Mayers in the final over elevated the Stars to 172 for 8 from their 20 overs – a total that demanded that venue-record chase from the Tallawahs for them to claim victory.