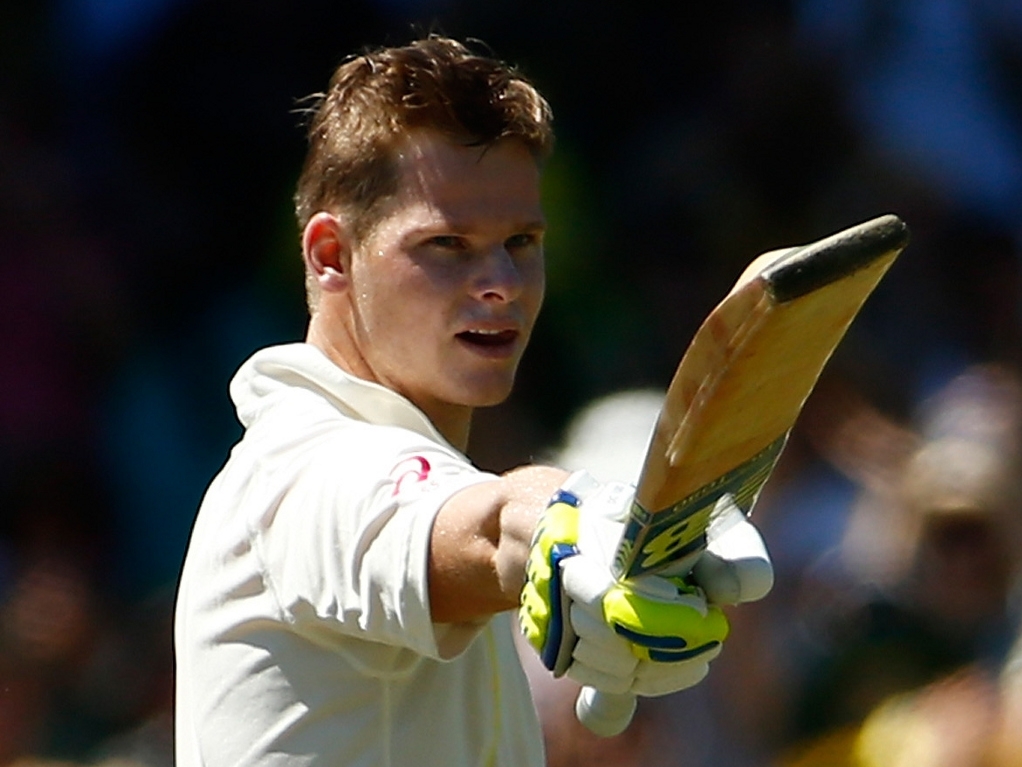 A fifth hundred by Steven Smith in his last six Tests helped Australia recover from an early setback and wrestle control of proceedings at Sabina Park in Kingston, Jamaica.

The visitors were sent into bat by home skipper Denesh Ramdin but despite the heroic efforts of Jerome Taylor (3-18 in 15 overs) they have a commanding 256 for four at stumps on the first day.

Three key injuries to the home side forced the selectors to make some changes and compound the the pressure on the West Indies side.

Michael Clark said that he would have batted anyway on a wicket that was a little tacky but offered good pace and bounce and was to settle down after a tricky first hour.

When he was caught and bowled by Kemar Roach to make the score 22 for three he might have reconsidered that statement but much to Australia’s delight he was called back to the crease after a video replay showed that Roach had overstepped and the delivery was then re-classified as a no ball. The margins between success and failure can be very narrow in professional sport  and this was a very clear example of that.

It was as if Clarke felt he needed to make good use of his second life because he immediately upped the tempo after his reprieve as he dispatched the red ball repeatedly down the ground for boundaries off Veerasammy Permaul, one of three forced changes to the side. Permaul was given a call up after fellow legspinner Devendra Bishoo, the local star of the last Test, was unfit to play as his injured finger had not recovered in the week since the last Test.

Kemar Roach (0-65) looked rusty as he replaced Shannon Gabriel and bowled too short and wide as his first seven overs before lunch went for 40 runs. The third newcomer to the team is Guyanese debutant Rajendra Chandrika, replacing Marlon Samuels who has a problem with his eye. The Samuels injury is a heavy blow as he is not only the side’s best batsman but has become increasingly handy with the ball as well.

Taylor’s bowling was a highlight of the day as he bowled with aggression and accuracy, took three key wickets and bowled eight maidens in his 15 overs. It was a delight to watch but he sadly was given little support by his team mates on a wicket that turned out to be very good for batting. Ramdin will feel his bowlers should have made more of the assistance on offer first up but it was hard to justify bowling first on this good deck.

Smith  (135 not out) dominated the day and continued his cracking run of form – it is no wonder he has a Test average in the fifties and he has a fine opportunity to convert this hundred into a really big one.

Smith did survive a dropped catch at slip off the spinner when on 109 and it looked as if he might have been stumped on the last ball of the day but his foot had not left the ground. The 118-run partnership with his captain, Clarke, saved their side from a precarious position and he and Shane Watson will continue on day two knowing that they have every chance of batting only once in this Test.

It is the rainy season here but the forecast is on the dry side over the next few days and it will be good for the game if a better crowd turns out to watch over the weekend.

The first Test match in Dominica was sadly over in three days before the weekend had begun. If the West Indies are to avoid a likely defeat here then they will need to take plenty of wickets and score plenty of runs on day two. The neutrals among us will hope they do but it would be unwise to hold our breath…