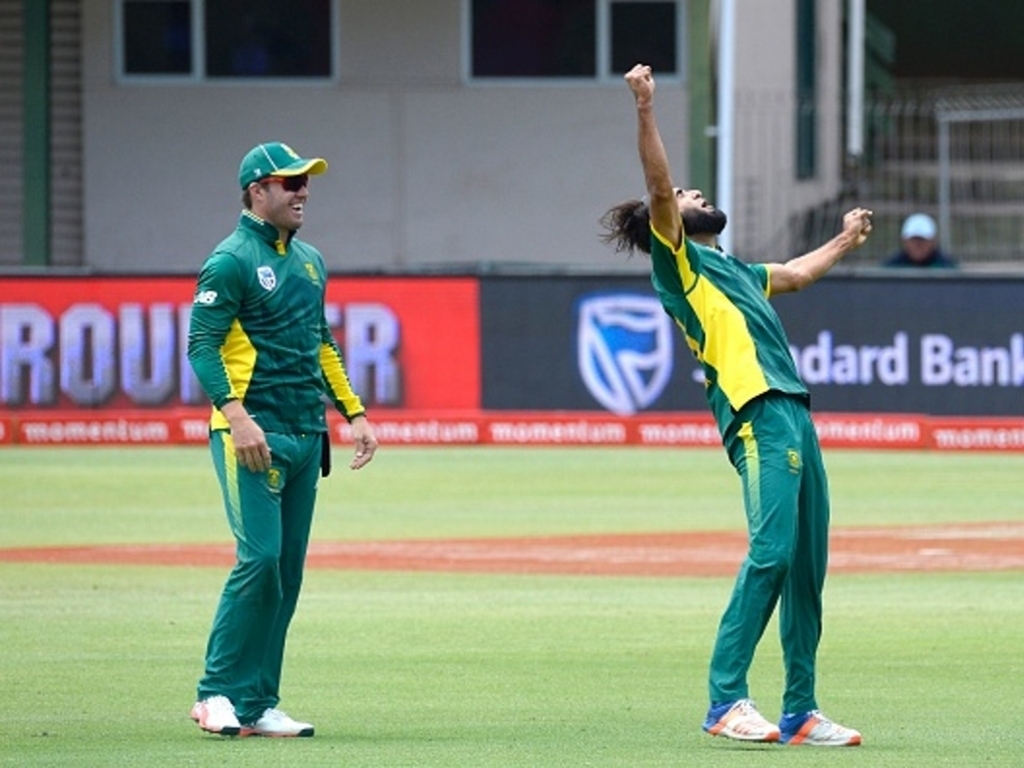 The Proteas coasted to a comfortable 8 wicket victory over Sri Lanka with 15 overs and four balls to spare on a windy day in Port Elizabeth.

The Sri Lankan’s can’t point the finger of blame at the weather though, with their batsmen yet again culpable as they slumped to 181 all out in 48.3 overs.

Wayne Parnell struck with his first ball of the game trapping T20I man of the series Niroshan Dickwella leg before for just 1.

Off the first ball of his very next over Parnell had his second as debutant Sandun Weerakkody (5) couldn’t resist having a fiddle at one outside off.

Kusal Mendis and Dinesh Chandimal put on 72 for the second wicket with the former moving to 28 entirely in boundaries before finally scoring a single.

Chandimal looked like a man struggling for form and made just 22 off 55 balls before he was bowled by a beautiful googly from Imran Tahir.

Mendis (62) survived a leg before decision off the bowling of Tahir courtesy of a review once but was given out yet again to the spinner a few overs later and employed the review again but this time in vain as he was absolutely plumb.

Tahir got his third when he accounted for Sri Lanka skipper Upul Tharanga and Sri Lanka were in deep trouble at 102 for 5 the spinner was the pick of the bowlers with his return of 3 for 26 from ten overs.

Dhananjaya de Silva and Asela Gunaratne (10) were involved in a mix up that led to the latter being run out with the former pushing hard for the second while the man dismissed was always reluctant.

Dhananjaya (28) couldn’t see Sri Lanka through to the end of the fifty overs as he was brilliantly caught by Faf du Plessis off Parnell’s bowling.

Chris Morris picked up a brace of tailend wickets to close out the innings after Kagiso Rabada claimed his first and only wicket.

In reply the Proteas were clinical and the loss of Quinton De Kock (34) and Hashim Amla (57) couldn’t stop the Proteas victory march.

Ab de Villiers (30 not out) and Du Plessis saw South Africa over the line with minimum fuss.

Du Plessis (52 not out) would go to his 24th ODI fifty just before striking the winning runs in the 35th over.

Man of the match Tahir revealed his performance was motivated by an anniversary promise to his wife: “Very happy with the way it came out. Very good, pleasing day for me and the team.

“Just a believer that I need to keep doing it every game, and for that, I have been working really hard. I don’t take any game lightly.

“Playing for South Africa is really special. Today is very special because it is my wedding anniversary. My wife asked me to get five wickets and this is absolutely for her.

“I think I was bowling against the wind which was obviously easier for the batsmen to hit me. But I always look to bowl according to the field. Somehow I get my wickets but I try not to give runs and try and use my variations.

“Every wicket I take for South Africa, I try to express how much it means to me when I celebrate. I play for a great country and a great team and I want to continue doing it for as long as I can.”

Sri Lanka skipper Tharanga was naturally disappointed: “I think Chandimal and Mendis had a partnership, but we could never pick up from the two wickets at the start. It’s about spinners, the wicket was slow.

Proteas skipper De Villiers on the other hand was thrilled with his return to the helm: “I thought it was a really good performance. It was a difficult wicket to get used to, low, slow and a bit two-paced.

“But we used our chances really well, great bowling performance to set it up for our batters. Our new-ball bowlers bowled with a lot of intensity and Immy (Imran Tahir) bowled really well.

“I have had a few windy games before in my life, so I just relied on my experience from those games and it paid off really well today. There is more than enough time, Russell and I keep talking about plans and there is also Faf to bounce ideas off.

“It’s a tricky total always. It was definitely below-par, I thought 250-260 would have been easy to chase down, but it could still have been tricky.

“But Quinton and Faf got off to a good start and it set things up nicely for the remaining batters. Easy win today, but we expect them to fight back in the series.”