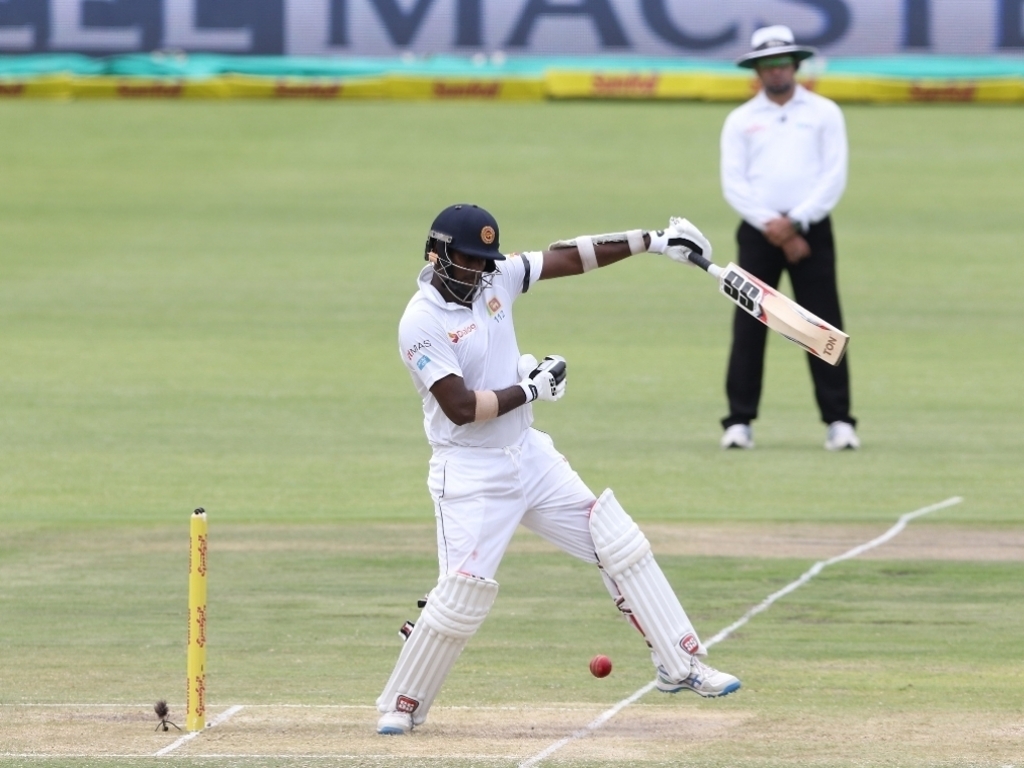 South Africa endured a tough day in the field as Sri Lanka managed to survive 83 overs and leave themselves an outside chance at winning the game finishing on 240/5.

Earlier South Africa had declared after reaching 406/6 with both Quinton de Kock and Faf du Plessis converting overnight forties into half centuries.

When De Kock departed for 69 when he was trapped leg before by Rangana Herath and Du Plessis (67 not out) immediately declared.

Sri Lanka’s response was a vast improvement on the first innings with the openers Dimuth Karunaratne and Kaushal Silva putting on a record for a first wicket parternship for Sri Lanka in South Africa as they took their team to 87.

The pair looked comfortable and the run out of Karunaratne came against the run of play, the opener hesitated and Duminy pounced to run him out for 43.

Kusal Perera (6) fell shortly afterwards as he nicked off to Keshav Maharaj and Sri Lanka looked in danger of collapsing.

Kagiso Rabada produced an excellent ball to trap Silva leg before for 48 and leave Sri Lanka 118 for 3.

Kusal Mendis and skipper Angelo Mathews would put on a frustrating 75 run partnership and looked like they were settling in for the long haul.

Rabada came around the wicket to try and bounce out the Sri Lankan middle order batsman and Mendis fell into the trap trying to ramp a bouncer and getting only a faint tickle on it.

Mathews was dropped by Stephen Cook off Maharaj in a final session that produced plenty of chances but few wickets.

The skipper would bring up his fifth fifty in South Africa in style hitting JP Duminy to the fence for four.

Dinesh Chandimal (8 off 50 balls) would eventually hole out to Maharaj after a patient stay he was trying to go big but succeeded only in picking out Mid-on.

Mathews was granted another life when his thick edge off Duminy’s bowling hit De Kock’s pads and looped away rather than to one of the close fielders.

Dhananjaya de Silva was given out leg after South Africa took the new ball but Mathews insisted on reviewing and the decision was overturned.

They would survive until the close with Mathews on 58 and Dhananjaya on 9 but South Africa will have a three over old ball in their hands tomorrow morning.