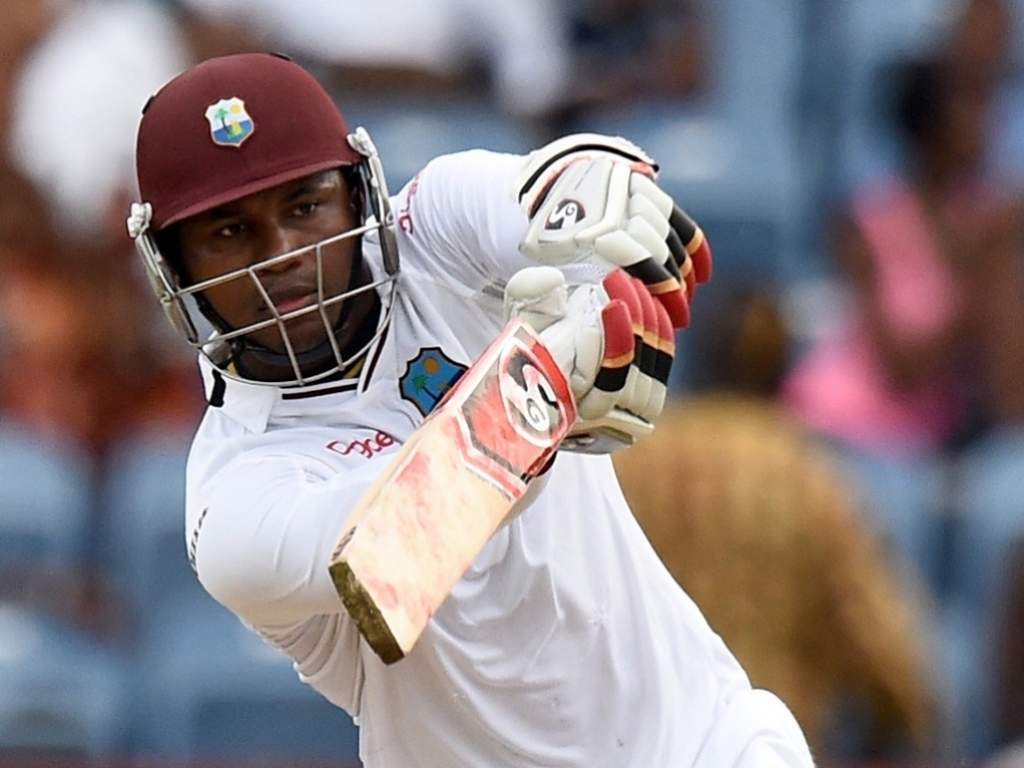 England skipper Alastair Cook won the toss in Grenada and on a day's play that was delayed by rain the West Indies struggled up to 188 for five in 70 overs.

Moeen Ali was brought in at the expense of spinner James Tredwell for England in a move that strengthens their batting order, although it remains to be seen who is a more effective spinner.

The West Indies had two changes to their bowling attack as Sulieman Benn was dropped and Jerome Taylor pulled up with an injured shoulder – they were replaced by Davendra Bishoo and Shannon Gabriel.

On a wicket so slow that Geoff Boycott described it as being "like Sago pudding but not as tasty", the West Indies scraped around for runs on a damp and soft surface under heavy skies.

Two runs to the over was the norm for most of the day, as shots that seemed certain to go for four came so slowly off the bat and rolled so slowly through the thick green outfield that they stopped short half-way to the boundary.

It will be interesting to see if the pace of the deck picks up after a roll and some sunshine but it unfortunately looks like another surface on which it will be difficult to prize the 20 wickets needed by a side to win a match.

If the cricket was slow then at least the atmosphere was not, as Billy the trumpeter kept the crowd alive, whenever the party stand DJ was not pumping dangerous decibal levels across the national cricket stadium.

England's bowlers did a fair job as they managed to keep the scoring rate in check and chip away at the oppostion and prevent any batting partnership from getting away from them. The attack's approach was not an aggressive one however as they bowled too wide and short for a side that had won a good toss, and the home side was able to leave a great many deliveries alone.

The James Anderson (1-18 from 15 overs) jaffer that bowled Kraigg Brathwaite (1) early doors was a thing of beauty that swung over a foot in the air and beat the opener all ends up.

Local hero Devon Smith (15) was given out caught behind to Chris Jordan (2-40, 16 ovs) but replays suggested his bat hit the ground and not the ball. Darren Bravo was caught flicking off to Cook at slip off the bowling of Broad (1-41, 16 ovs), who did not look threatening and did not attack the stumps at all, nevermind enough.

When Shiv Chanderpaul (1) chipped uncharacteristically to point off Ben Stokes the Windies were in a spot of bother at 74 for four in the 34th over. Marlon Samuels and Jermaine Blackwood (26) rebuilt things slowly as the pitch and outfield dried out, but an excellent review from Jordan overturned a not out decision against Blackwood and the bowler was rewarded for some clever seam bowling on a deck that did not offer much lateral movement during the day.

Captain Denesh Ramdin (6 not out) joined Samuels for a fightback that would keep their side in the game. Patience was once again required from an often hasty West Indies and Samuels dug in and anchored the innings, which he was unwilling to do in Antigua.

Once he managed his half-century from 142 balls he seemed to change from first gear to fourth and batted at exactly a run a ball before England wanted to go off, and by not giving the ball to Root (the umpires had ruled that only spinners could be used in the gloaming) they denied Samuels a hundred for now and handed the home side the momentum overnight.

It was hard to know who had had the better of the day but that decision meant it belonged to the West Indies. The light brightened up soon afterwards as the clouds above all but disappeared.

If the result is another marginal draw then Cook’s reluctance to try Root on a day where Moeen Ali did not look like a frontline spinner might stand out as a culpable error. Bad catching and in particular Cook's drop in the slips of Samuels on 32 of Jordan didn’t help the visitors’ effort either.

Play starts a quarter of an hour early on day two.