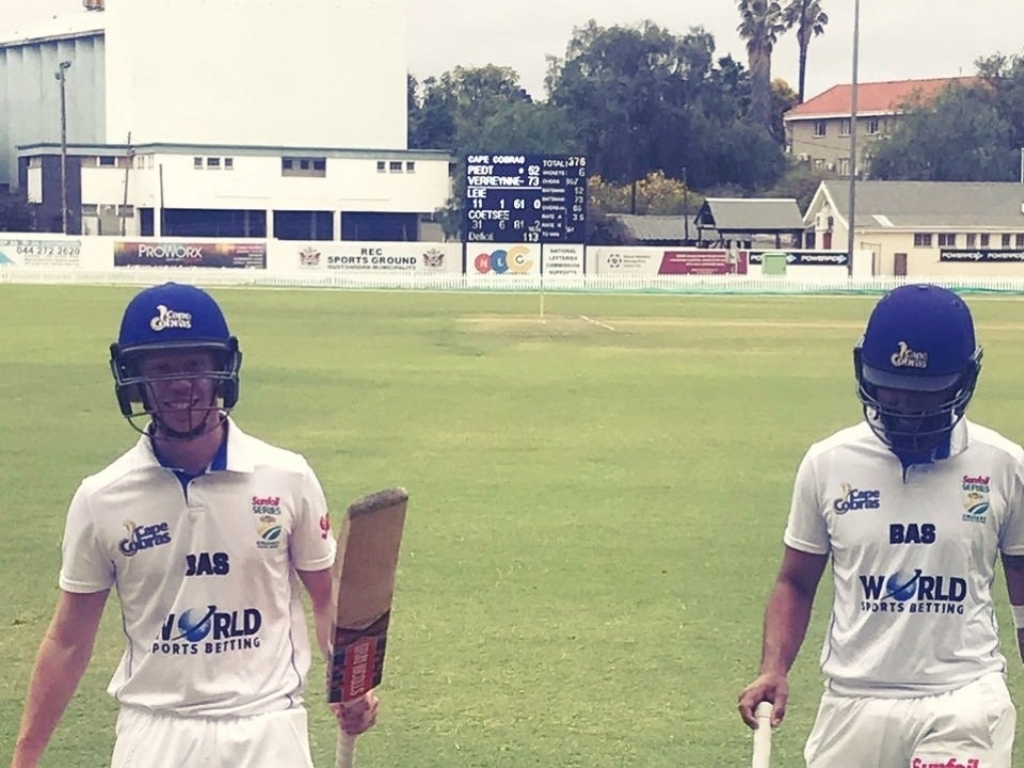 Half-centuries by Kyle Verreynne and Dane Piedt ensured the Cape Cobras and VKB Knights were even poised after the third day of their Sunfoil Series clash at the Recreation Ground in Oudtshoorn on Sunday.

The pair put on 105-runs for the seventh wicket to ensure the hosts closed to within 42 of the visitors’ 489 for five declared when they were bowled out for 447.

The Cobras had resumed the third morning on 281 for five, with Verreynne going on to make 85 (170 balls, 6 fours) – his highest score in franchise cricket.

Piedt, meanwhile, made 62 (120 balls, 8 fours) to help close the gap further between the two sides.

They were eventually dismissed in 129.2 overs with Ottniel Baartman picking up three for 79 and Marchant de Lange, in his first game of the season, bagging three for 95.

Three wickets apiece by Malusi Siboto and Shaun von Berg followed by some attacking batting gave the Titans a slim chance of victory after three days of their Sunfoil Series clash against the Warriors at Sahara Willowmoore Park in Benoni on Sunday.

Proteas star AB de Villiers was at the heart of the home sides’ intentions with an unbeaten 32 from 26 balls, but he was stopped by the weather with his team on 97 for two in 18 overs – a lead of 157.

Earlier on the visitors managed to add just over 100 to their overnight 158 for five as they were dismissed for 261.

Captain Jon-Jon Smuts made 63 (113 balls, 10 fours), before three for 84 by Von Berg and Alfred Mothoa’s two for 23 helped run through the tail. Siboto also picked up three for 31.

The Titans came out in attacking mode with the bat, scoring at over 5.3 runs to the over.

Jonathan Vandiar hit 23 off 39 balls, before De Villiers and Heinrich Klaasen (23 off 22 balls) shared an unbroken 49-run stand that was disrupted by the rain and then bad light.

Both wickets were taken by Simon Harmer (2/29).

Three wickets from Aaron Phangiso ensured the Highveld Lions enjoyed a strong third day of their Sunfoil Series clash against the Dolphins at the City Oval in Pietermaritzburg on Sunday.

The hosts reached stumps on 185 for six with the Standard Bank Proteas spinner taking three for 59, although time was against the visitors in their quest to press for a result.

After 78 overs were bowled on day one and a mere 26 on day two, 74.1 were possible on the penultimate day due to rain and bad light.

The Lions opted to declare on their overnight 277 for seven – leaving Wiaan Mulder unbeaten on 70 – and then began their work with the ball.

Morne van Wyk (17) and Senuran Muthusamy (35) put on 47 for the first wicket, before falling in quick succession to Bjorn Fortuin (2/44) and Craig Alexander (1/31) respectively.

Top-scorer Vaughn van Jaarsveld, who made 52 (57 balls, 7 fours, 1 six), added 58 with Sibonelo Makhanya (20) for the third-wicket to get the Dolphins back on track.

However, both fell to Phangiso with the slow left-armer also getting rid of debutant Dane Vilas (4).

It left Khaya Zondo with the job of producing a rescue act and the captain reached an unbeaten 38 by the close, with his side trailing by 92 runs.