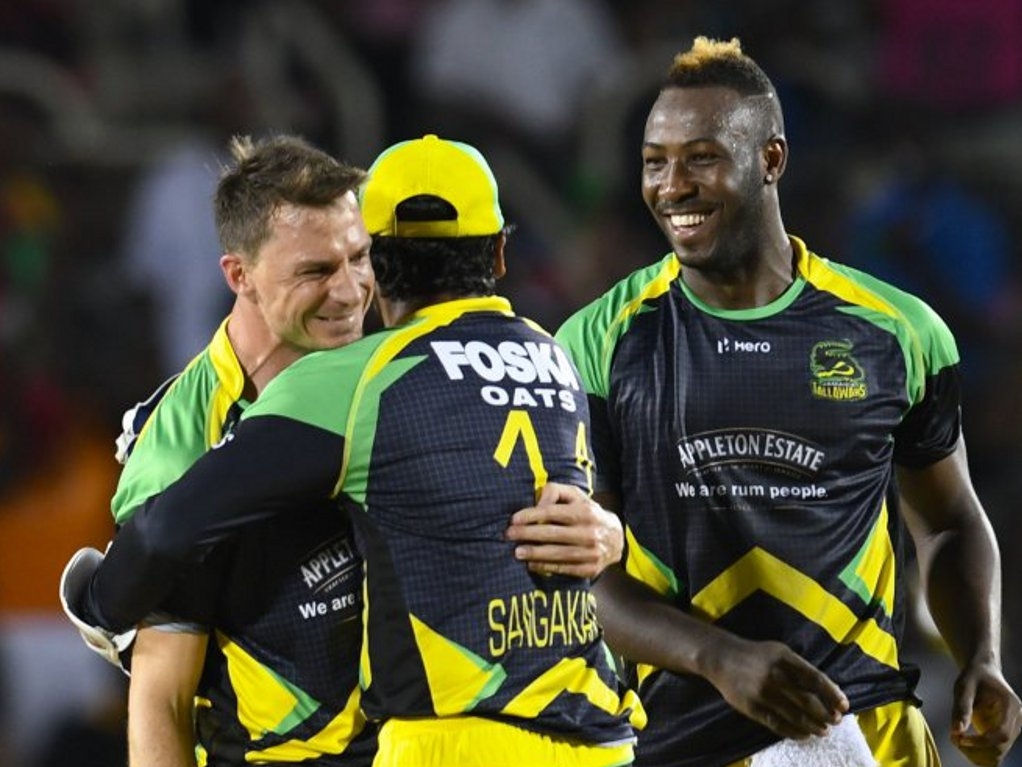 The Jamaica Tallawahs have moved to the top of the Caribbean Premier League table with a fine win against the Trinbago Knight Riders at Sabina Park, their third successive home victory in three matches.

A career best score by Rovman Powell and a brilliant display of hitting at the end of their innings from Andre Russell helped the Tallawahs to set a target of 159 to win.

Runs from Hashim Amla further cemented his place at the top of the CPL run-scoring chart, but he played a lone hand with wickets falling around him as the Tallawahs won by 19 runs with Andre Russell backing up his batting display with four wickets with the ball.

Much of the speculation before the match was about whether Chris Gayle would be fit to play, and the Tallawahs would have been delighted when he was able to take the field. Unfortunately for the packed crowd at Sabina Park his innings did not last long. Gayle struggled to get off the mark and was dismissed for a nine ball duck when he edged behind off Kevon Cooper.

With both openers gone it fell to Sangakkara and Rovman Powell to rebuild. Powell has continued to impress in his first ever T20 tournament, he has been the find of the CPL.

Here he struck four sixes as he made a T20 high score of 44. Sangakkara and Powell departed within three balls of each, both falling to short balls from Cooper. Their partnership of 72 came from just 50 balls.

Cooper was in fantastic form with the ball, getting extra bounce that troubled all of the Tallawahs batsmen. He finished with figures of 3-22, his best figures in CPL, and those three wickets were Gayle before he got going and Sangakkara and Powell when well set.

It looked like the Tallawahs would set a sub-par total, but a brilliant counter-attacking 44 from Russell gave the home team a chance. Russell smacked five fours and three sixes using a neon pink bat to give the Knight Riders a stiff chase.

Brendon McCullum came back into the Knight Riders team and opened the batting with Amla. With Colin Munro at three the Trinbago team have a very strong top order but two of those men were gone within the first four overs. McCullum was out stumped off the bowling of Imad and Munro spooned a catch into the covers off Dale Steyn.

That left Amla to hold it all together, and his innings of 42 did just that, but in the absence of a significant partnership the requited run rate climbed quickly.

While Amla was at the crease with Denesh Ramdin the Knight Riders would have felt they were in this chase, but when Amla was out going for a big shot off Kesrick Williams there was still a lot of work to be done.

Dwayne Bravo struck back-to-back boundaries to bring the rate down but another cluster of wickets including two wickets in two balls from Russell ended TKR’s chances of reaching the victory target.