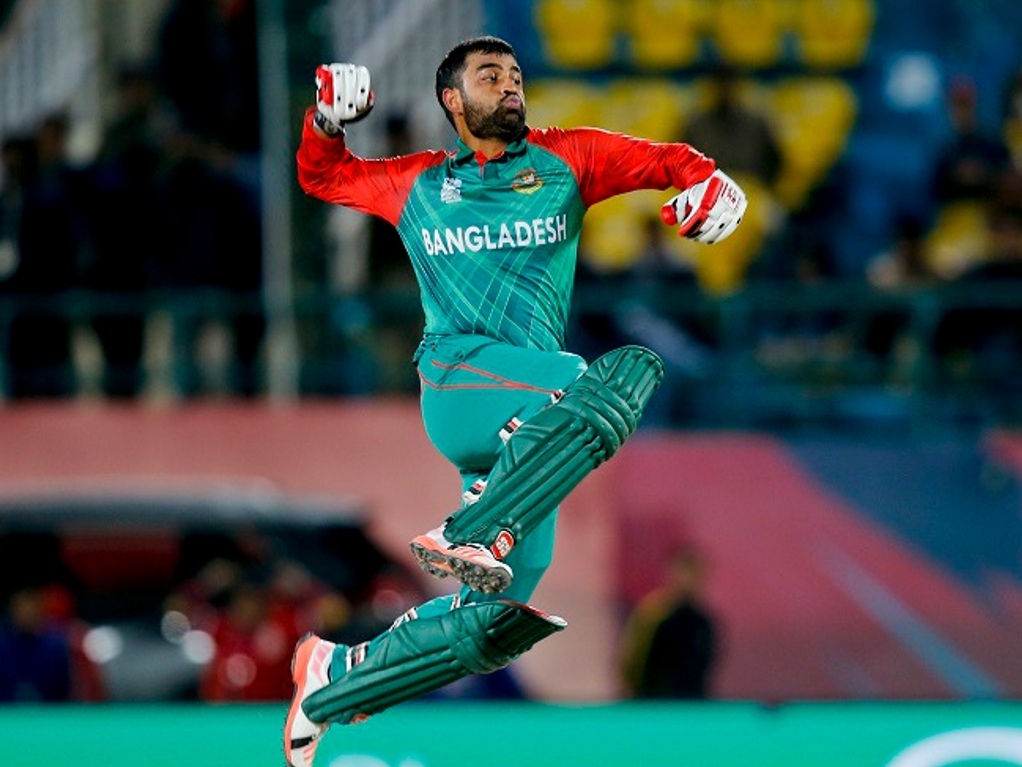 Bangladesh advanced to the Super 10 stage of the World Twenty20 by beating Oman by 54 runs (D/L method) on Sunday in Dharamsala, but even without the rain it would have been a big ask thanks to Tamim Iqbal's century.

The Tigers recorded 180 for two in their 20 overs, with Tamim recording a historic 103 not out, and Oman's chase failed to get going thanks to regular wickets and regular rain breaks. They were on 65/9, well behind the calculated target of 120 off 12 overs, when time ran out.

After rain had disrupted much of the early part of the day, the weather cleared in time for the toss and Oman opted to field first after calling correctly, thinking they'd be able to use the swinging conditions.

This proved true for the first few overs, as Bangladesh struggled to get going as the ball swung appreciably. Bilal Khan was particularly impressive, and of all the Oman bowlers, he remained the one the Tigers could not get away.

Tamim was excellent from the start though, as he and Soumya Sarkar put on 42 for the first wicket. Sarkar was uncomfortable at the crease though, and was out for 12 off 22 balls to Ajay Lalcheta.

This left Tamim and Sabbir Rahman to continue, and the pair picked up the pace dramatically in the middle overs. Boundary after boundary came off their bats, with Tamim reaching his half ton in 35 balls.

Sabbir was unable to reach his though, as he was bowled with his score on 44. The delivery from Khawar Ali gave the stumps the lightest of touches as it went past Sabbir's legs, but it was enough to dislodge the bails.

Tamim continued his onslaught with the help of Shakib-al-Hasan, and the opener recorded his century in the 19th over, off 60 balls. It was his first in the format, and also Bangladesh's maiden T20 ton.

While Oman did manage to stifle the scoring slightly in the last few overs, it still left them a hefty, and even then unlikely, target, given the Tigers' pace stocks, not to mention Shakib's spin.

Oman's chase got off to a poor start when Zeeshan Maqsood was removed with the second ball of the innings, caught by Mahmudullah in the deep off Taskin Ahmed. After three overs, Oman only had 14 runs, a far cry from the asking rate of nearly 10.

Khawar was out for eight runs in the fourth over, caught at mid on by Mashrafe Mortaza off Al-Amin Hossain, but the players were forced off the field a few minutes later as the rain returned to dampen the spirits.

At that stage, Oman were around 20 runs behind where they should have been according to the Duckworth Lewis Stern method, and with the rain getting heavier by the minute, it effectively spelled the end of their impressive campaign.

When the rain eased up, the overs had been reduced to 16, and the Omanis lost a quick wicket upon the resumption of play. Sarkar struck with a direct hit to run Adnan Ilyas out for 13.

Shakib struck in the next over to see Aamir Kaleem caught behind for a duck, and then the rain once again stalled proceedings, with Oman on 45 for four, 33 runs behind the par score at that stage.

When they returned, Oman needed an improbable 75 more runs off 22 balls. It became farcical though, as wickets tumbled with ease and Shakib ended with figures of 4/15.