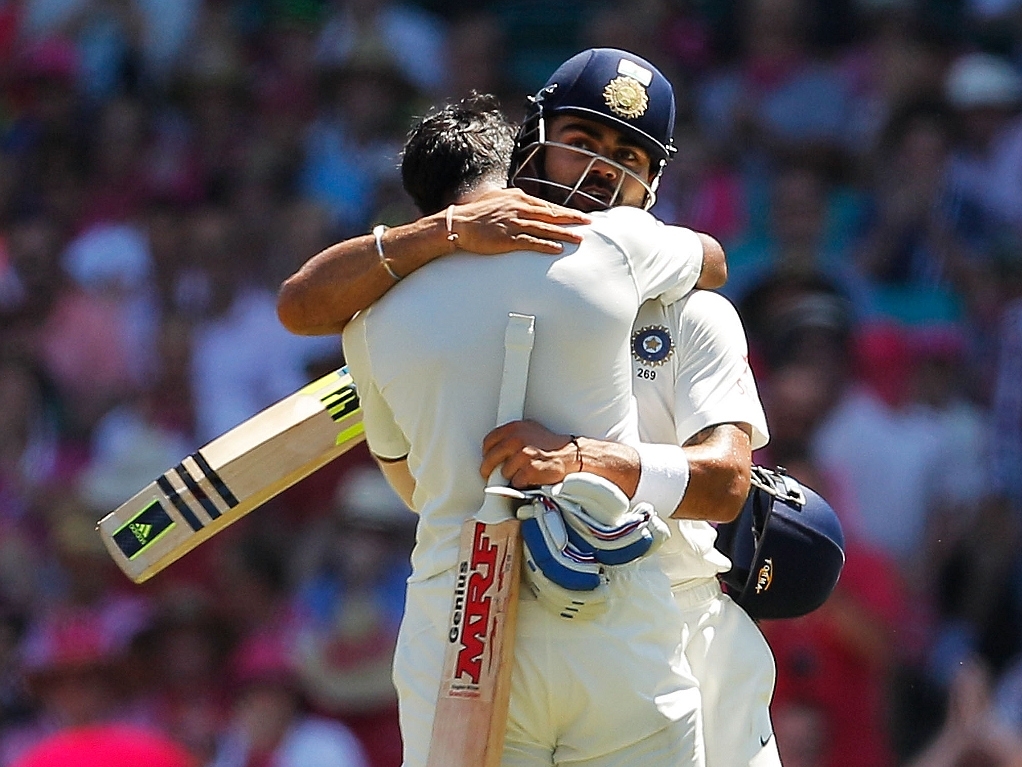 An unbeaten hundred from Virat Kohli and a ton by opener Lokesh Rahul saw India reach 342 for the loss of five wickets at stumps on the third day of the final Test in Australia, still 230 runs behind the hosts' first innings score.

Whilst the Aussie bowlers stuck to their tasks manfully in friendly batting conditions, it could have been a much more successful day for the hosts had captain Steve Smith, normally a safe fielder, had hung on to catches both centurions offered.

With his score on 46, Rahul top-edged a hook shot from the bowling of Shane Watson and with the sun in his eyes, Smith put down the catch running back from slip.

Then, shortly after the second new ball was taken with Kohli's score on 56, Smith grassed a difficult catch from the bowling of Mitchell Starc when the Indian skipper pushed a length delivery from the left-armer only to edge it to slip, where his Aussie counterpart was unable to hang on to a difficult one above his head.

In the end, Rahul went on to make 110 before he was caught and bowled by Starc after skying another hook shot, while Kohli remained unbeaten on 140 by the time stumps was called.

The Indians resumed their first innings on Wednesday morning with their score on 71 for one with Rahul and Rohit Sharma at the wicket, after the Aussies declared with their score on 572 for seven and then dismissed Murali Vijai without scoring the night before.

Sharma (53) was the first to fall in the morning when he was bowled by a Nathan Lyon delivery than spun much more than he anticipated and took out his off-stump when he tried to play an aggressive sweep shot.

Rahul was then joined by Kohli at the wicket and together the two centurions added 141 for the third wicket before the opener eventually fell for a fine hundred.

Ajnkya Rahane (13) never really got going and was given out leg-before to a Watson delivery to make the score 292 for four, however Hawkeye suggested that the ball would have gone over the stumps by some distance.

The Aussies thought they were in with a chance of making significant inroads into the Indian batting line-up when Suresh Raina was dismissed by Watson's next delivery – pushing away from his body at one that seamed a touch only to knick it straight to Brad Haddin behind the stumps.

Kohli, though, in partnership with wicketkeeper Wriddhiman Saha added 50 for the sixth wicket as India completed a decent day's batting in Sydney.

For the Aussies, Watson (two for 42) and Starc (two for 77) were the pick of the bowlers, but they would be slightly concerned over the performances of Ryan Harris and Josh Hazlewood, who bowled 43 wicketless overs between them…