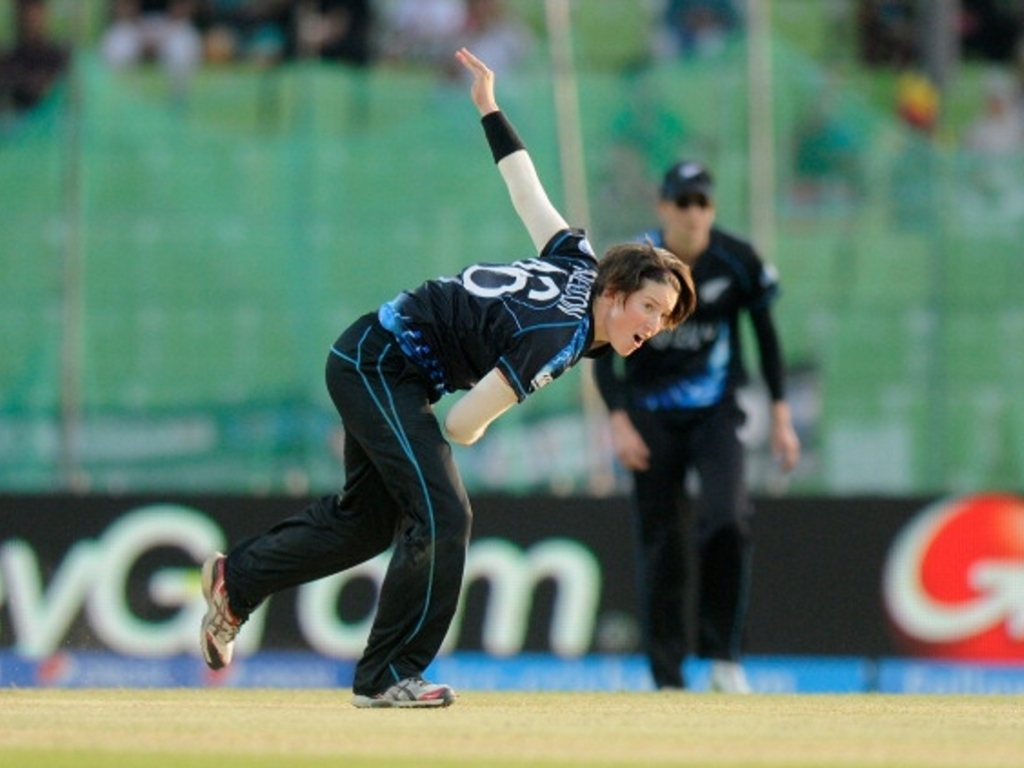 New Zealand’s White Ferns have seized back their series lead in style — and, significantly, have moved up into third place on the ICC Women’s Championship table with a nine wicket win over the Proteas in Kimberly.

The toss on the baking blue-sky day in Kimberley appeared to be the only aspect of the game that captain Suzie Bates did not have in control as her team sprang back from their first-ever loss to the Proteas Women, on the same strip earlier this week, with a venomous all-round performance.

Being invited to bowl first for the first time in the series posed few problems for the visitors, opening off-spinner Morna Nielsen breaking through in just the second over of the day before quickly going on to claim her 50th career ODI wicket — the key loss of Mignon du Preez ensuring South Africa was off to a rocky start at 21 for two.

But the star of the wickets column in this match would be recalled pace bowler Holly Huddleston, who picked up a late 29th birthday present in the form of her second ODI five-wicket bag.

Huddleston had already combined with Amy Satterthwaite to run out obstinate opener Lizelle Lee on 36, before trapping Lara Goodall just two balls later to have South Africa 55 for four with her first outright scalp.

That was in the 13th over — and ‘Nelson’ would eventually prove equally unlucky for the hosts when Huddleston crucially put paid to a concerted fifth-wicket rebuild by senior pros Marizanne Kapp and Dané van Niekerk.

Kapp’s painstaking 32 ended in the quick hands of Katie Perkins off Huddleston in the 33rd over — the pivotal breakthrough the first of three catches to the fielding dynamo.

“At that point we had been looking to just keep the building the pressure on them, but after that catch it just steamrolled from there.”

Although Proteas captain van Niekerk would continue on for an unbeaten 78, no one else would stick with her as Huddleston continued to chip away to finish with a career-best five for 25.

Rachel Priest’s exit in the fifth over of the reply would prove a brief flicker of joy for the South Africans before composed duo Bates and first drop Amy Satterthwaite joined forces for what would develop into the fourth highest unbroken partnership in New Zealand women’s cricket history — their second-wicket stand of 174 in 28.4 overs also a White Ferns record against South Africa.

At her fluid, calm best, in the 20th over Satterthwaite became the first to raise her bat for a half-century (56 balls, 9×4) — prompting Bates to slam young leg-spinner Suné Luus for two sixes in the same over, posting the New Zealand 100 in the process.

With just a further 86 runs required, the South Africans now required a major miracle if they were to stop the White Ferns from claiming the overall IWC honours, let alone the immediate, rampant assault by the classy pair.

Bates marched on to her own half century (63 balls, 2×4, 2×6), then flayed her opposing skipper’s bowling for back-to-back boundaries. She ended South Africa’s troubles with one final boundary off Masabata Klaas to seal the win with 101 balls to spare, finishing unbeaten with an 88-ball 82 and Satterthwaite likewise undefeated with 89 off 97 in the impressive tally of 190 for one.

The White Ferns now sit equal on points with the second-placed West Indies on the IWC table, separated by net run rate. The final standings will be ascertained in the next round, in which the New Zealanders host Pakistan in New Zealand.

While they have claimed the key IWC phase of the South African tour 2-1, the overall honours for the South Africa series remain very much alive. The two teams now contest a further four ODIs for the series trophy, and move to Paarl’s Boland Park for the fourth ODI on Monday.