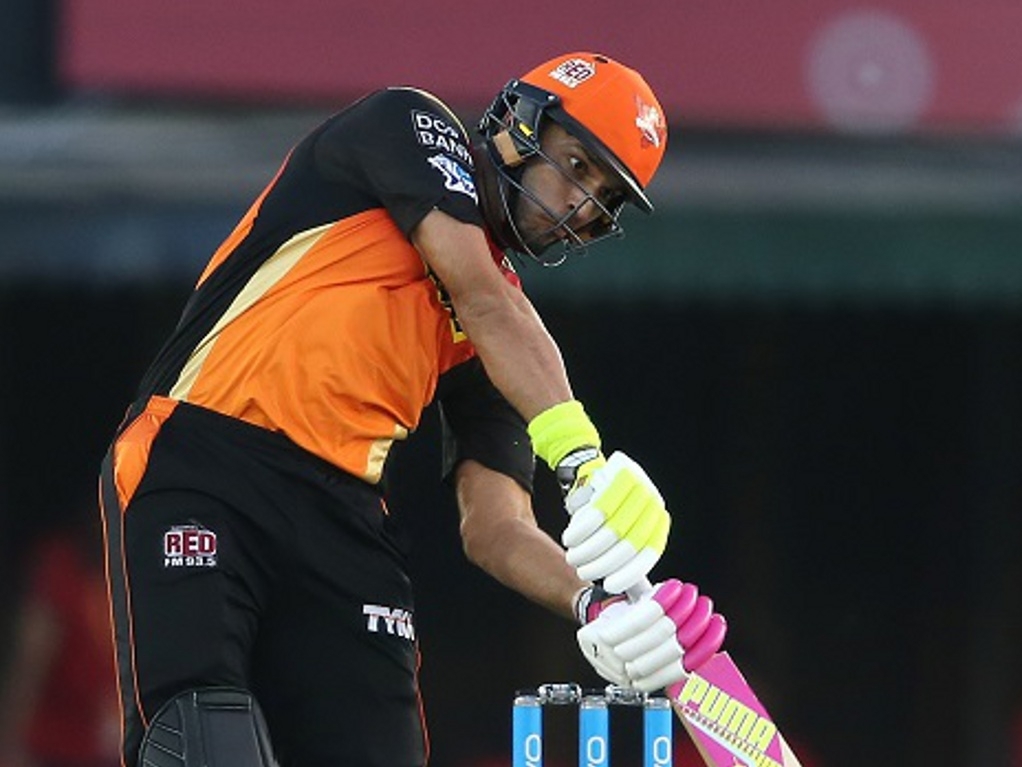 The Sunrisers Hyderabad pulled off a difficult chase on Sunday as they beat the Kings XI Punjab by seven wickets, with Yuvraj Singh's cameo negating the impressive 96 Hashim Amla had scored.

Kings XI recorded 179 for four, with Amla doing the bulk of the scoring, and while the chase seemed to be tight in the middle overs, a nifty 42 not out from Yuvraj made sure the Sunrisers stayed top of the table.

Having won the toss and opting to bat, Punjab got off to a decent start and put on 33 runs inside the first four overs, mainly thanks to Amla. Murali Vijay made only six of those runs before going out to Mustafizur Rahman.

Amla and Wriddhiman Saha then put on a half century stand over the next seven overs, with Amla recording his fifty in that time. Saha broke the stand when he was out for 27, caught by Deepak Hooda off Moises Henriques.

Amla then added another half ton stand with Gurkeerat Singh, taking the score to 152 in the 18th over, when Singh was out. He also departed for 27, bowled by Bhuvneshwar Kumar.

This brought David Miller to the middle, and he made 20 not out off nine balls, while Amla fell agonisingly short of his ton. He was out for 96 off 56 balls, caught by Warner off Kumar in the final over.

This left Hyderabad needing 180 to win, with paceman Kumar saying in the innings break: "This is like 250 on a flat wicket, we didn't bowl well. It's tough to score since it's slow."

The partnership ended with the score on 68 in the 8th over, when Dhawan was wonderfully run out by a Mohit Sharma direct hit. The India opener had made 25 off 22 balls, while Warner was on 40 then.

The Australian reached his half ton off 38 balls, and it was his sixth such score this season. The Sunrisers still had plenty of work to do though, as they were well behind the asking rate.

Warner was soon back in the dressing room though, having been dismissed Hit Wicket, a rare mode of dismissal and one that saw him scream in frustration. He had stepped back onto his stumps with playing to the leg side.

It was actually the third hit wicket dismissal for the Sunrisers in three matches, an astonishing statistic if you remember that the last time someone got out like that in the IPL before this season was in 2013.

This left Hooda and Yuvraj Singh with it all to do in the final eight overs, and a few lusty blows then saw them need 50 runs off the last 30 balls. Hooda was out for 34 in the 16th over, so all the pressure was on Yuvraj.

SRH needed 41 off the final four overs, and then 20 runs off the last two, with Yuvraj going strong. He plundered 19 runs off the 18th over alone, as Mohit lost his line and length.

Ben Cutting reduced the deficit even further in the penultimate over with a huge six, but Sunrisers still needed  a tricky nine runs off the last over. It was made less tricky when Yuvraj all but ended the game with a massive six.