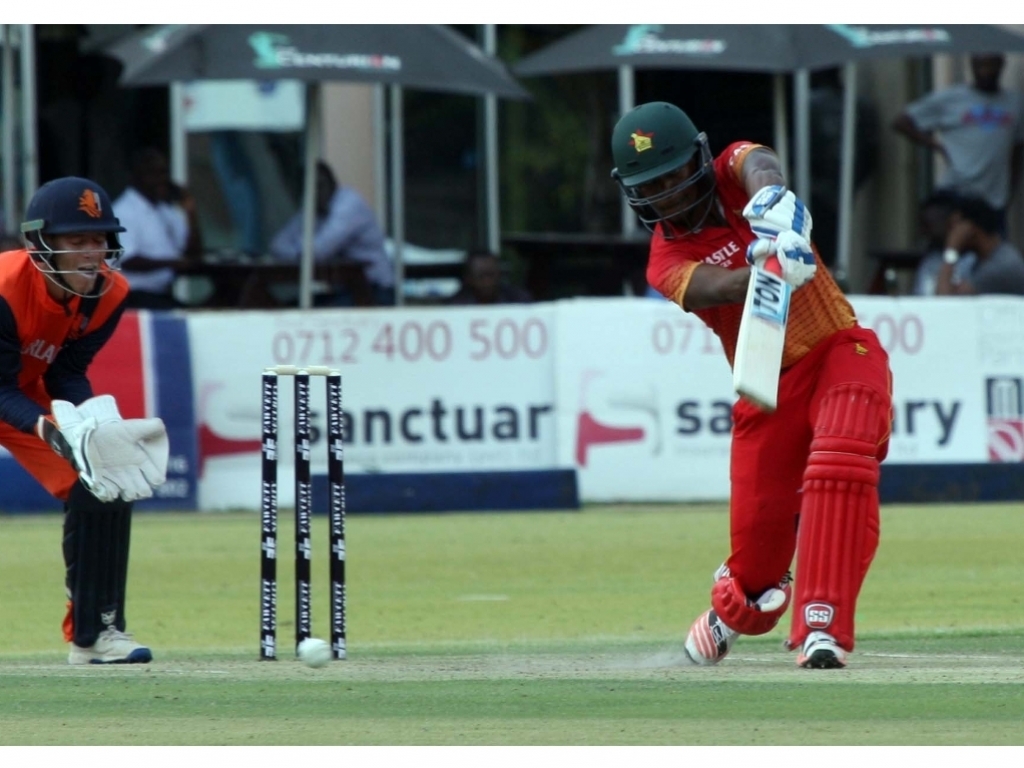 The Zimbabwe Select XI cruised to an easy nine-wicket victory over the touring Netherlands team today at Harare Sports Club.

The visiting batsmen never looked like setting a challenging target against good Zimbabwean bowling and fielding, and the top three home batsmen made light of their easy target of 182, with Chamu Chibhabha scoring 78 not out and being on the field throughout the match.

The Netherlands side, playing as the Royal Netherlands Cricket Board (KNCB) XI, won the toss and decided to bat, on a largely overcast morning and a pitch with some green in it that gave a little assistance to the seam bowlers.

They opened with Wesley Barresi and Michael Rippon against the bowling of Richard Ngarava and Mpofu.

Again the Dutch batsmen struggled to adjust to pace greater than they usually have to face, and soon lost Rippon, caught at slip off a rising ball from Ngarava for seven; nine for one after five overs.

Ben Cooper did not last long, and did not score before he pushed tentatively at a ball from Mpofu outside his off stump and edged a catch to Chakabva, who was keeping wicket in this match.

Mpofu in particular bowled many short balls, taking advantage of the batsmen who found them difficult to play.

Barresi and Peter Borren decided the only chance they had of success lay in attack, and took 11 runs off three successive deliveries from Ngarava, only for Barresi to be brilliantly run out attempting a quick single off the final ball, by Sikandar Raza throwing the stumps down from side-on.

The KNCB XI were reeling at 21 for three off nine overs as Pieter Seelaar joined Borren.

The pair now decided to see off the pacemen, but this did not work either, as Tiripano, replacing Ngarava, brought a ball in to Borren to trap him lbw; 31 for four in the 15th over.

Mpofu was rested after an opening spell of one wicket for nine runs off seven overs, and Chibhabha took over from him.

Against this gentler attack Seelaar and Max O’Dowd began to effect a recovery, batting with caution and waiting for the right ball to hit.

O’Dowd was the more aggressive of the two, scoring 24 off 39 balls before he missed a sweep against the off-spin of Raza and was adjudged lbw; 80 for five in the 28th over.

With Sikander Zulfiqar, a batting hero of the first match, at the crease, Ervine decided to go for the kill and brought back the pace of Ngarava.

The left-arm paceman immediately removed Seelaar, who edged the ball and Chakabva made a superb diving catch to dismiss him for 28, without addition to the total.

Zulfiqar and Tobias Visee, however, decided to go for their strokes, which they did with some success, bringing the team hundred up in the 34th over, from Tiripano, Visee hitting three successive fours.

Visee scored an aggressive 25 off 27 balls before he was beaten and trapped lbw by Raza, the score then being 120 for seven wickets in the 38th over.

Zulfiqar went on to reach 33 off 44 balls before he drove a ball straight back to be caught and bowled by Sean Williams; 154 for eight in the 45th over.

When Ngarava and Mpofu returned for the final four overs of the innings, the batsmen bravely took them on, and Bas de Leede successfully scooped a ball from Ngarava over the fine-leg boundary for six.

Fred Klaassen miscued a pull to be caught for 12 in the final over, from Mpofu, and off the final ball the 10th wicket fell as Paul van Meekeren failed to respond to de Leede’s call for a bye and was run out without scoring.

None of the first four batsmen passed 10, when the new-ball bowlers were on, but the next five all scored between 24 and 33.

Mpofu had the best figures of two for 20 off his nine overs, while Raza had two for 34 and Ngarava two for 39.

The Zimbabwean pair of Hamilton Masakadza and Chibhabha opened confidently against the bowling of van Meekeren and Klaassen, 12 runs coming off the former’s first over.

Chibhabha took some risks and survived a difficult dropped catch, but Masakadza looked very sound and confident until, as in Wednesday’s match, he unwisely went for a reverse sweep that proved his downfall.

This time the ball popped up to the wicketkeeper and he was adjudged out for 33, scored off 33 balls, the score being 70 for one after 13 overs.

The hundred came up in the 17th over, as Ervine hit Rippon for two fours and a six, and Chibhabha reached his fifty off 58 balls with a big six over long-on off the bowling of de Leede.

It all looked too easy for Chibhabha and Ervine as they closed in on the target at a rate of well over a run a ball.

Ervine reached his fifty off 40 balls, and a few minutes later the match was over as the home side completed their task with nine wickets and more than 23 overs in hand.

Chibhabha finished with 78 off 81 balls (six fours and three sixes), and Ervine with 60 off 47 balls (four fours and two sixes).

It was an easy and clinical victory, and none of the Dutch bowlers were able to trouble the batsmen at all.