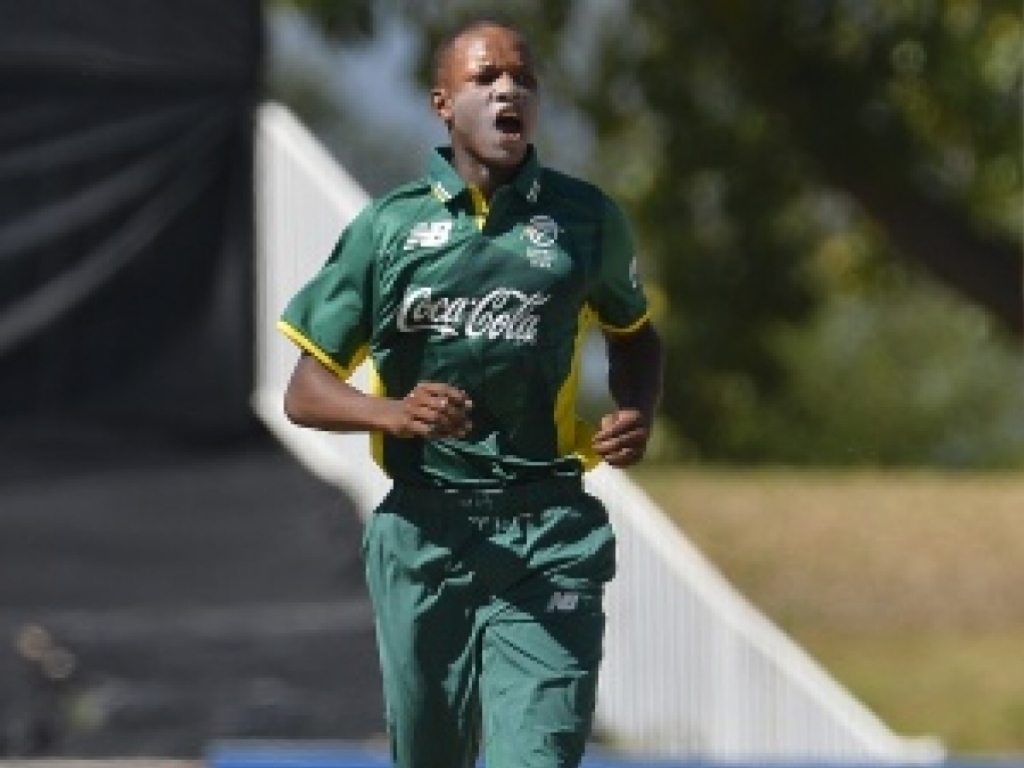 Eighteen-year-old Akhona Mnyaka has described his selection for the Bloem City Blazers in the inaugural T20 Global league as ‘unexpected’ and as an opportunity to grow his fledging cricket career.

Mnyaka is the youngest player to be picked in the player draft, which saw all eight teams in the tournament finalise their respective squads in Cape Town over the weekend.

The left-arm seamer from East London – who made his South Africa Under-19 debut earlier this year – says he is looking forward to playing with and against some of the best cricketers in the world.

He particularly wants to gain as much knowledge and experience from Bloem City Blazers bowling coach mentor, Allan Donald, a player he has looked up to as a young fast bowler.

“I don’t think my selection has sunk in yet,” he admitted. “It is quite nerve-wrecking thinking that I will be playing against some of the best cricketers in the world, but at the same time, it is an opportunity to test my skills against the best if I am given the opportunity.

“I grew up idolising players like Allan Donald, David Miller and Kieron Pollard, and now I get to be part of their fantastic squad, what a dream come true.

“I’m really grateful for the opportunity to be part of the Bloem City Blazers and I hope to use my time with the squad learning, growing and adapting as a cricketer.

“I want to absorb as much information as possible during my time with the squad, and hopefully put that back into my career going forward.

“This competition has really opened up the platform for many young cricketers in South Africa, it will no doubt expose a lot of potential players that can go on to make their mark for South Africa.”

Bloem City Blazers assistant coach, Robin Peterson – who took the lead at the draft in the absence of head coach Phil Simmons – believes they have assembled a squad that has covered all of the bases.

From the explosive hitting of David Miller and Kieron Pollard, the death bowling skills of Chris Jordan, Dane Paterson and Beuran Hendricks, the spin variations of Shaun von Berg and Aaron Phangiso, and dynamic all-rounders in Dwayne Smith, Rayad Emrit and Ryan ten Doeschate; it all seems set to be a blazing synergy.

“We are very happy with the squad we have picked,” Peterson said. “I feel we cover all of the bases in terms of power hitting, death bowling, all-rounders that can contribute with bat and ball, spinners that can come in with different variations.

“We also have a good leadership structure within the team, we have six players who have captained before and in my opinion, some of the best T20 players in world cricket.

“I worked with Akhona at SA under 19 level and he really impressed me with his pace and talent,” he said of the youngster. “He is a futuristic pick, I’m excited to see the bowler he develops into after two years playing with and against the best players in the world.

“He is a left-arm seamer so he offers something different; being involved in the T20 Global League will be good exposure to how he professionally manages his game and hopefully he can carry that into his career.”

Mr Sushil Kumar, team owner, believes the calibre of players selected will be able to carry the legacy the Bloem City Blazers want to stamp onto the tournament.

“We have said it before that our involvement in the tournament is bigger than just cricket,” he commented. “We believe the players we have selected will not only do us proud on the field, but will also carry our vision and mission of bringing people of different cultures and identities together.

“We have a deep-rooted commitment to the development of all facets of South African cricket and the composition of our squad is the starting point of leaving an indelible mark on cricket in the Free State and South Africa.”