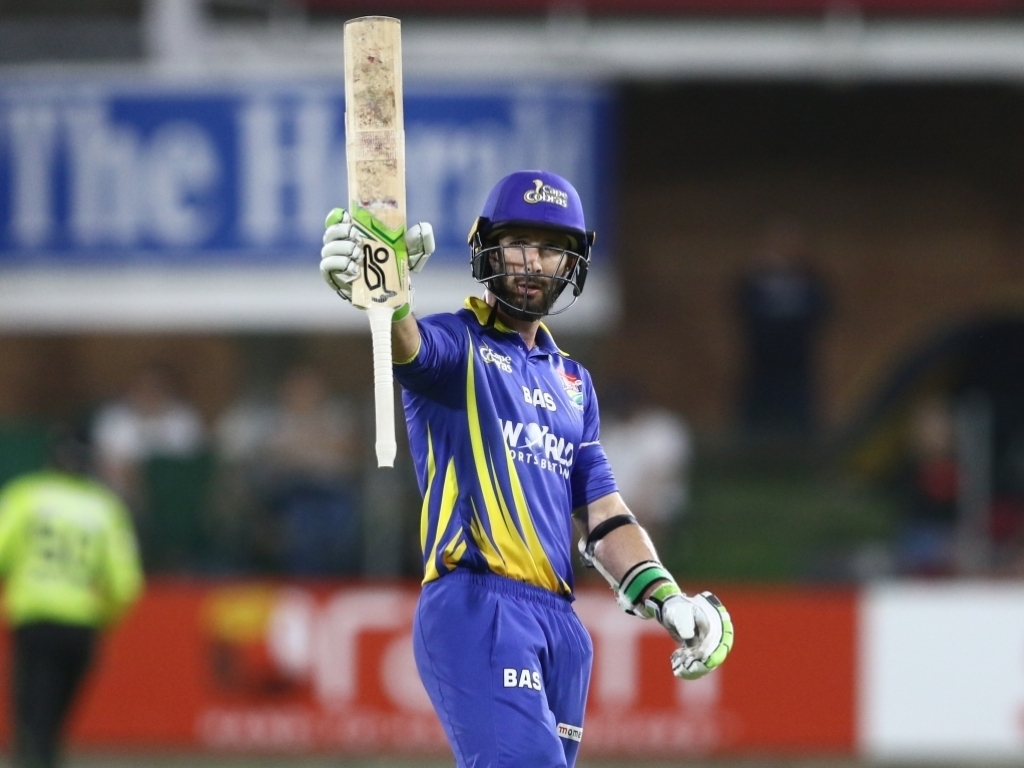 The Cape Cobras won the battle to host the second Momentum One-Day Cup semi-final after Pieter Malan’s unbeaten 94 helped them to a 10-run Duckworth/Lewis win over the Warriors in their final league phase encounter in Port Elizabeth on Friday.

With the final four already decided prior to the game, the only remaining prize on offer was the right to stage the second semi-final and they sealed that despite some late jitters at St George’s Park.

Malan, though, kept his composure through his 131-ball vigil that yielded just four fours but did the job for his side, whose total of 249 for seven in 46.5 overs was ahead on par scores, in their pursuit of a 265-run target.

The Warriors had set their challenging mark thanks to Gihahn Cloete’s excellent unbeaten 120 (138 balls, 8 fours, 5 sixes), the second List A three-figure score of his career and second of the season.

Colin Ackermann hit 45 and Clyde Fortuin 36 to give the home side a strong finish. Dane Paterson was the best of the bowlers with two for 46.

The Cobras then made light work of the chase, particularly for the first 37 overs when they had reached 200 for three.

Malan was the mainstay, but there was good support in that period from George Linde, who blazed his maiden half-century at this level with a score of 74 (55 balls, 8 fours, 2 sixes).

But it nearly went wrong from there as Jon-Jon Smuts picked up three for 49. However, Malan kept his cool to leave them ahead of the run rate when rain arrived before the end.

The Cobras will now go on to host the Dolphins in Cape Town on Wednesday, with the Warriors to meet the Titans in Centurion on Tuesday.

A sparkling century by Dane Vilas helped the Dolphins end their Momentum One-Day Cup regular season campaign with a convincing six-wicket Duckworth/Lewis win over the Titans in Centurion on Friday.

But the result was not enough to book a home semi-final after the World Sports Betting Cape Cobras edged out the Warriors in Port Elizabeth to ensure they will host the KwaZulu-Natal side at PPC Newlands for the last-four encounter next Wednesday.

It was nonetheless a confidence-boosting win for the Durbanites against the defending champions and runaway winners of the competition’s league phase.

Vilas was the star of the show with a thrilling 103 (85 balls, 11 fours, 1 six) – his eighth List A ton – that helped the visitors chase down a revised 253-target from 40 overs with four wickets and 11 balls still standing.

The Dolphins had won the toss earlier and asked the Titans to take first strike.

Henry Davids, returning from an injury lay-off, was one of three half-centurions after he made 52 (66 balls, 7 fours, 1 six).

Rain then ended the innings with the home side on 269 for six after 48.2 overs. The pick of the bowlers was Senuran Muthusamy after he collected three for 59.

After the total was adjusted to 253, the Dolphins were reduced to 93 for four following two early wickets by Shaun von Berg, who ended with three for 47.

However, Vilas and Muthusamy then combined for a 141-run fifth wicket stand that turn the contest on its head.

After the fall of the former, the latter ended on 64 not out (61 balls, 4 fours, 2 sixes) to complete the chase and secure a memorable win.

Defeat for the Titans was inconsequential as they already had top spot in the bag and they will now play the Warriors in the first semi-final on Tuesday.

An outstanding 179-run opening stand by centurion Reeza Hendricks and rookie Janneman Malan ensured the Highveld Lions ended the Momentum One-Day Cup season on a positive note after an 138-run win over the Knights in Potchefstroom on Friday.

Their first wicket partnership paved the way for the host to score 299 for seven at Senwes Park, with the visitors then bowled out for 161 in 36.3 overs as they ended with the wooden spoon.

Bjorn Fortuin was the pick of the bowlers after bagging a career-best four for 22 that ensured the Lions also took away a bonus point.

Both sides have been poor this season and were looking to regain some pride from the contest in what was a dead-rubber in the North West.

After the hosts won the toss and batted, Hendricks and Malan left them in a strong position, before the stand was broken after 30.5 overs.

Wiaan Mulder’s 37 not out off 22 balls and 33 by Rassie van der Dussen then ensured the momentum continued, although two wickets each by Ottniel Baartman (2/56), Romano Terblanche (2/49) and Corne Dry (2/53) did reel in the home side slightly.

The visitors then made a good start to the chase by reaching 103 for two in the 20th over, thanks in the main to top-scorer Pite van Biljon (42).

But Fortuin ran through the middle and lower order with good support from Mulder, whose three for 32 was also a best effort in List A cricket.