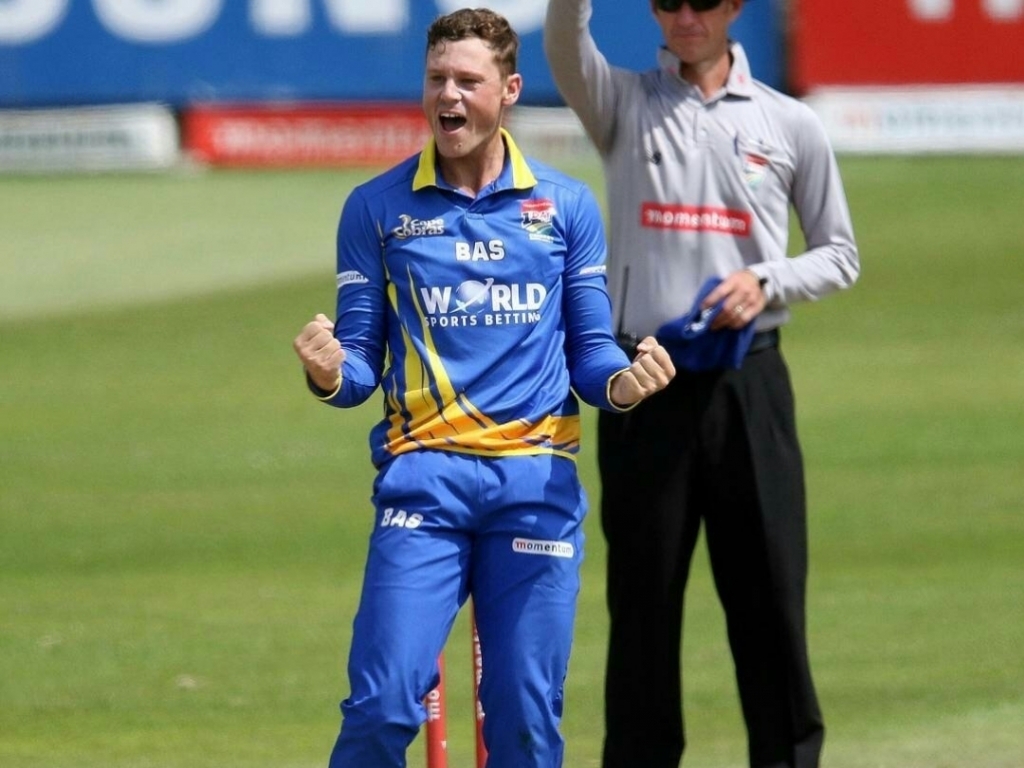 A record six-for by George Linde helped the Cape Cobras end the year on a high after they secured a 67-run bonus-point win over the Warriors in the first-ever Momentum One-Day Cup clash in Oudtshoorn on Saturday.

The slow left-armer claimed figures of six for 47 in 9.1 overs, the best ever figures for the franchise, to help the hosts bundle out the visitors for 175 in pursuit of a 243-run victory target.

Linde’s figures bettered the five for 17 of Charl Langeveldt, which was also against the Warriors, at Cape Town in the 2009/10 season.

It was an outstanding effort and came after Pieter Malan’s top score of 84 (116 balls, 6 fours, 1 six) had earlier lifted the Cobras to a competitive total at the Recreation Ground – hosting its maiden franchise 50-over game after previously staging a handful of four-day matches.

The Warriors had won the toss at the start and asked the home side to bat first, a decision that looked the wrong one early on.

Wayne Parnell (34) helped Malan put on 72 for the first wicket, before he became the first of Sisanda Magala’s three for 41.

A further 72 followed between Aviwe Mgijima (37) and Malan, before the Cobras started losing regular wickets, eventually losing their way from 160 for two in the 34th over to 242 for nine.

Ayabulela Gqamane was the pick of the bowlers with three for 29.

Dane Paterson (2/23) then rocked the Warriors by dismissing openers Matthew Breetzke (0) and Gihahn Cloete (7) to leave them on seven for two.

Another double, this time by Mthiwekhaya Nabe (2/36) left the away side in further strife on 38 for four, before Linde got into the act to take the remaining wickets, including that of top-scorer Christiaan Jonker (63 off 39 balls, 3 fours, 5 sixes).

He was the last man to fall as the Warriors were all out in 36.1 overs.

Hardus Viljoen starred with bat and ball as the Highveld Lions secured a dramatic two-wicket Momentum One-Day Cup win over the Dolphins at Senwes Park in Potchefstroom on Saturday night.

The fast bowler first claimed three for 43, before striking an unbeaten 30 off 28 balls to take his side over the line with the final ball of the game.

It ended a see-saw tussle between the sides, which went down to the wire after the visitors looked set to secure victory when they reduced the home side to 221/8 in 46.2 overs with no recognised batsmen remaining.

Both were removed by Sibonelo Makhanya (3/36), leaving the Lions on the brink of defeat.

But Viljoen and Aaron Phangiso, who ended on 15 not out, dramatically turned things around.

They chipped away with mainly singles and one audacious clip by the latter for a boundary to tip the scales in the Lions’ favour as they eventually went on to claim a first win of the campaign in what was the final franchise game of 2017.

Earlier, Viljoen had helped his side bowl out the away side out in 48.5 overs thanks to his three wickets.

Beuran Hendricks also picked up two for 44 as none of the Dolphins’ batsmen crossed 50.

Robbie Frylinck top scored with 45, while Calvin Savage (37) made one of several 30s in a disappointing batting display that ultimately led to a first defeat for the visitors.