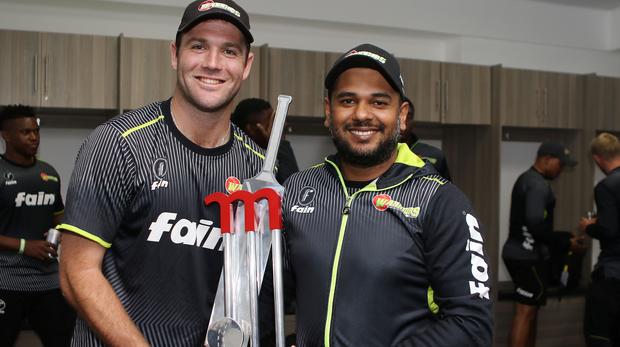 Warriors coach Rivash Gobind has lauded the consistency that the franchise was able to maintain through a sustained period during the recently concluded season.

The 2017/18 campaign was the most successful for the Eastern Cape side in the past eight years after they won a share of the Momentum One-Day Cup title, reached the play-offs in the RAM SLAM T20 Challenge and ended runners-up in the Sunfoil Series.

Their season looks all the more impressive considering they had to change coaches mid-season after Malibongwe Maketa was recruited by the Proteas as assistant coach, with Gobind stepping in on an interim basis, before he was made permanent coach a fortnight back.

“In terms of end results, that’s open for everyone to see,” Gobind says. “I think from a coaching perspective and from a team development perspective, what has been most satisfying was the fact that were able to be so consistent throughout the season.

“For us as a unit, that’s something that we’ve always been striving for. To make that sort of progress in this season is something we are very, very proud about.

“Hopefully we can carry on building on that consistency because that is what it’s all about at this level.

“Because the teams are so evenly matched, if you can maintain some level of consistency then you’re always going to get into a play-off competing for a trophy and that’s what’s been exciting for me.”

The Warriors have been brewing for the past few seasons now with consistency one of their key attributes, particularly in the limited overs formats.

They had been knocking on the trophy door after reached the play-offs in the past four competitions and their victory in the 50-over competition is the culmination of a whole lot of hard work.

“We’ve been on a pretty good run,” Gobind explained. “Obviously with the one shared trophy and coming close in the four-day competition they are also ticks in the right boxes.

“You can see we’re heading in the right direction. It’s obviously a good time to be involved with this group or to be around this squad of players.

“There’s a lot of good things happening. We’ve got some exciting young talent and we’ve also got guys coming into their prime as professional cricketers.

“You would have seen some guys also making it into the Proteas team and in terms of player development and team growth, I think the curve is going the right way.”

With his future also now ironed out, the 35-year-old is looking forward to leading the Warriors in 2018/19.

But he is cautious about creating too much expectation, insisting that their primary target is to consolidate the good work from the past few seasons.

“Trophies are always nice and are the result of a lot of small things that we’ve got to consistently do right,” Gobind adds.

“We need to make sure we maintain that next year and also be cautious about looking too far ahead because if we start looking into the future then we’re going to forget about watching the ball right now.”