An unbroken 81-run stand between Omphile Ramela and Rassie van der Dussen helped put the Highveld Lions in a commanding position at the end of day two of their Sunfoil Series encounter against the World Sports Betting Cape Cobras in Potchefstroom on Friday.

The pair batted together for 30.1 overs to take the hosts to stumps on 117 for two in reply to 217 made by the visitors on what was effectively day one of the four-day final round clash.

After heavy rain washed out day on at Senwes Park, the toss was only held before play began with the Lions calling correctly and asking the Cobras to bat first.

And it proved a bold decision as their bowlers quickly worked their way through the opposition batting line-up.

But that was as good as it got for the title-chasing Cape side as they slid from 111 for two to lose their remaining eight wickets for 106.

Bjorn Fortuin was the pick of the bowlers with three for 43, while Nono Pongolo (2/49), Nandre Kruger (2/60) and Dwaine Pretorius (2/56) collected two wickets apiece. 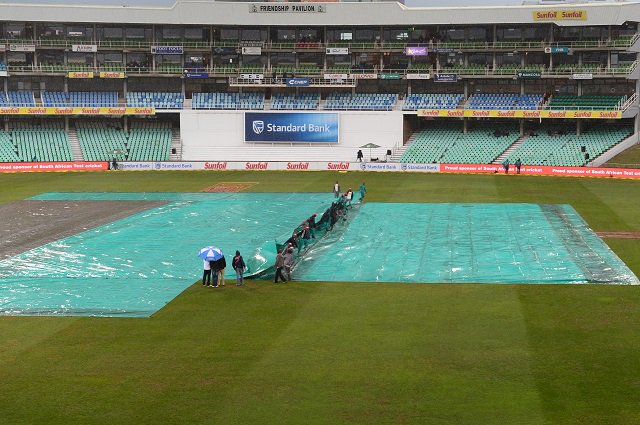 The Sunfoil Series title prospects of the Warriors, the Dolphins, the Titans and the Knights all suffered a blow on Friday after they failed to take to the field for a second successive day because of rain in Durban and Centurion.

At Sahara Stadium Kingsmead, persistent showers all morning meant there was little chance of play for the top-of-the-table visitors and the hosts in fifth.

Although the Warriors did lead the standings heading into the round, they will need to get some action in after their closest rivals, the Cape Cobras, began their game against the Highveld Lions in Potchefstroom on Friday.

All three final round games saw the opening day washed out by heavy rain across the country on Thursday.

Meanwhile at SuperSport Park, there was a chance of the Titans-Knights tie getting going early on day two when the rain abated. But the start was then held up by a wet outfield, before the skies opened later on forcing play to be abandoned once more.