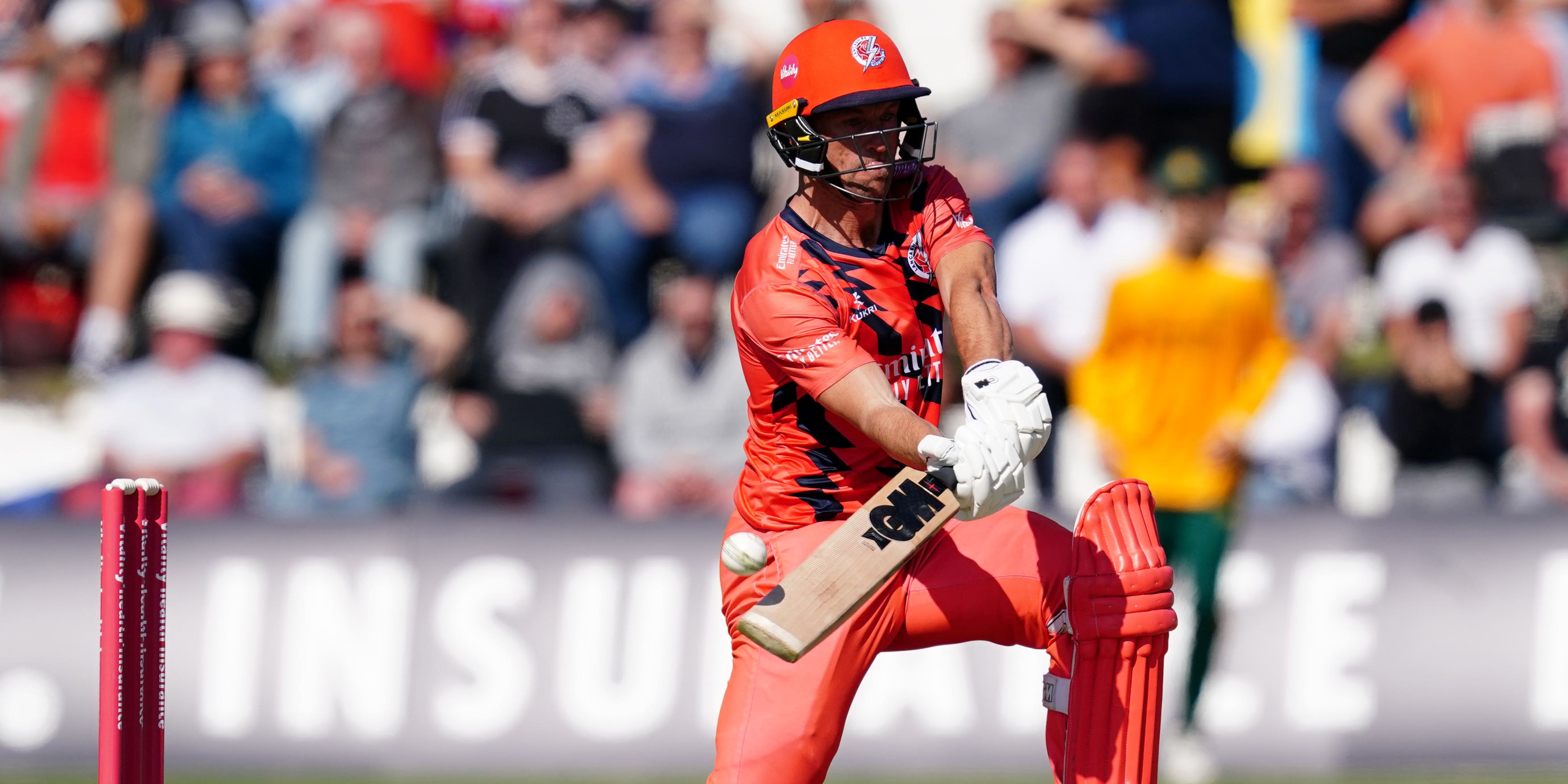 The 37-year-old Croft starred on his return to his home ground of Blackpool, hitting four fours and two sixes in an unbeaten 61 from 44 balls. Vilas added 55 as Lancashire easily reeled in a target of 180 for a win that dented the visitors’ hopes of reaching the last eight.

Derbyshire claimed their fourth successive victory as they cruised to a seven-wicket win over Birmingham Bears at Edgbaston.

Sam Conners (three for 25) and Mattie McKiernan (two for 18) did most of the damage as the Bears were restricted to 159 for seven, despite the best efforts of Sam Hain with an unbeaten 73 from 40 balls.

But the visitors made light work of their modest target, Wayne Madsen top-scoring with 55 off 34 as they raced to 160 for three with 11 balls to spare.

Rehan Ahmed notched career-best figures as Leicestershire gave their campaign a vital boost with a 51-run win over Durham in their clash at Chester-le-Street.

Wiaan Mulder was the key man with the bat for the Foxes, scoring 54 from 33 balls after the visitors appeared to be in danger at 80 for six.

The South Africa international timed the ball to perfection with four fours and two sixes to elevate his team to a defendable total of 157 for nine that the hosts never looked like reaching, as Ahmed took four for 22 and fellow spinner Callum Parkinson three for 16.

Kieron Pollard hit 34 as Surrey claimed a four-wicket win over Hampshire to maintain their unbeaten start in the South Group.

Pollard clubbed two sixes and three fours off 22 balls as Surrey easily reached their modest target of 152 and stayed top of the table.

Hampshire, for whom James Fuller scored an unbeaten 39 and Liam Dawson took two for 21, never looked in the hunt and saw their five-match unbeaten streak brought to an end.

Rilee Rossouw surged to the top of the Blast run-scoring charts as Somerset stayed on course for a home knockout tie with an eight-wicket thrashing of Essex at Chelmsford.

Rossouw plundered 85 not out off just 36 balls to move ahead of Northamptonshire’s Chris Lynn and Surrey’s James Vince in the standings as the visitors made light work of chasing down 189 to win.

Somerset skipper Tom Abell provided great support with an unbeaten 62 as the visitors romped home with 15 balls to spare.

Cracknell, with an unbeaten 43 from 37 balls, and Simpson (46 from 35) shared the only sizeable stand of a low-scoring game to set up Middlesex’s win with 15 deliveries to spare.

Defending champions Kent, who languish at the foot of the table, limped to 141 for nine after opting to bat, stifled during the middle overs by Middlesex’s spin trio of Chris Green, Thilan Walallawita and Luke Hollman.

Glamorgan claimed only their third win in 10 matches in the competition with a four-wicket success against Sussex in Cardiff.

Sam Northeast hit 57 from 43 deliveries and the big-hitting Dan Douthwaite saw the hosts home with an over to spare as they successfully surpassed the target set by Sussex of 150 to win.