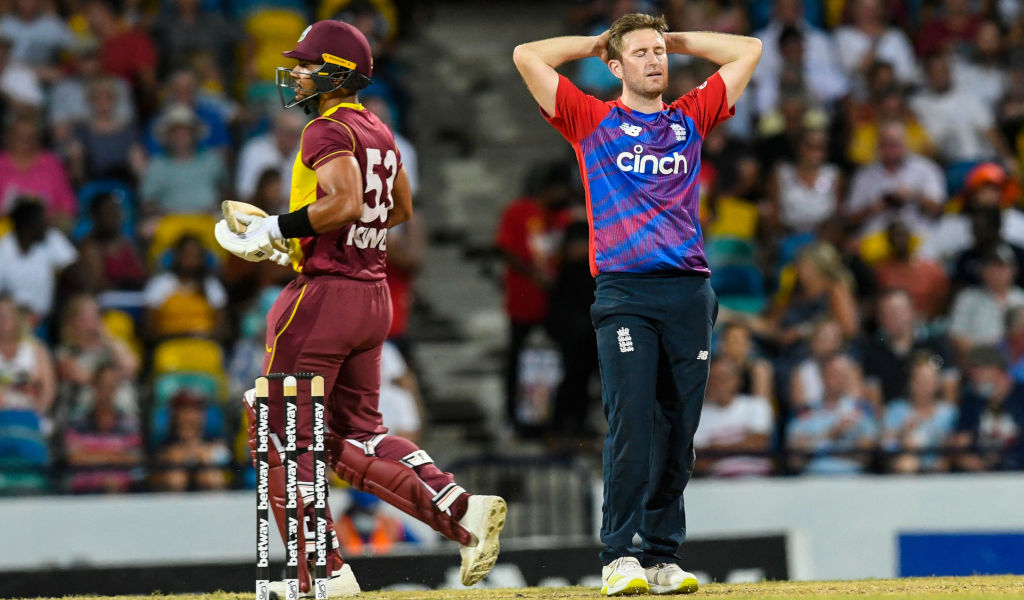 Liam Dawson acknowledged being on the periphery with England can be “frustrating” although he relishes staying in the set-up after playing his first international match since October 2018 in Barbados.

With Liam Livingstone laid low by an illness unrelated to Covid, Dawson got a rare opportunity in the first of five Twenty20s at the Kensington Oval against the West Indies, who thrashed England by nine wickets on Saturday evening.

Dawson made just two off nine balls before being run out as England were dismissed for a paltry 103 in 19.4 overs in front of a Covid-reduced crowd at Bridgetown.

But the all-rounder was miserly with his left-arm spin, conceding just 12 runs in four overs, and he was unfortunate not to make inroads into the home side’s batting.

Since Dawson last turned out for England, he has collected a 50-over World Cup winner’s medal in 2019 as an unused squad member and has regularly been involved in the white-ball parties without being needed.

He is phlegmatic about how his international career has unfolded – this was just his 13th appearance in all formats dating back to his debut in July 2016 – with England possessing enviable reserves in their batting while Moeen Ali and Adil Rashid are the preferred white-ball spinners.

“I think you’re very lucky to be in any England squad any time in your career,” he said. “You know it’s never a given so to be in the squad is always brilliant.

“You’re potentially only ever an injury away from playing. It’s frustrating at times but you put that back in your mind, train as hard as you can and hopefully you do get an opportunity at some point.

“It just shows how strong England have been in white-ball cricket, especially with Mo(Moeen Ali) and Rash (Adil Rashid) as well. I’m just very happy to get an opportunity here.

“It’s obviously been a while but it’s great to get another opportunity. I’ve really enjoyed it.”

Brandon King’s unbeaten 52 from 49 balls underpinned a restrained chase from the Windies, who took few risks as they overhauled a paltry target with 17 balls to spare.

England do not have much time to lick their wounds as they are in action again on Sunday, but Dawson sees the upside in a swift return.

“It’s a good thing,” he said. “We’ve got another opportunity to learn and put it right and get a win on the board. All the boys will be really excited to go again.”

England were in trouble almost from the off, stuttering to 10 for three then 49 for seven as their Ashes batting woes transferred formats to the Caribbean.

At one stage, a new all-time low benchmark was in the offing but Chris Jordan’s 28 from 23 balls and Rashid’s 22 from 18 deliveries ensured that remains the 80 they made against India at the 2012 World Twenty20.

Jason Holder finished with format-best figures of four for seven in 3.1 overs, twice taking two wickets in as many deliveries, as a new-look Windies side, without the likes of Chris Gayle and Dwayne Bravo, drew first blood.

“Everything clicked for us, things went our way and the guys really ran with it,” Holder said.

“I think in the past we probably would have eased up a little bit but I was really happy to see the guys keep the pedal to the metal and try to finish the innings off.”