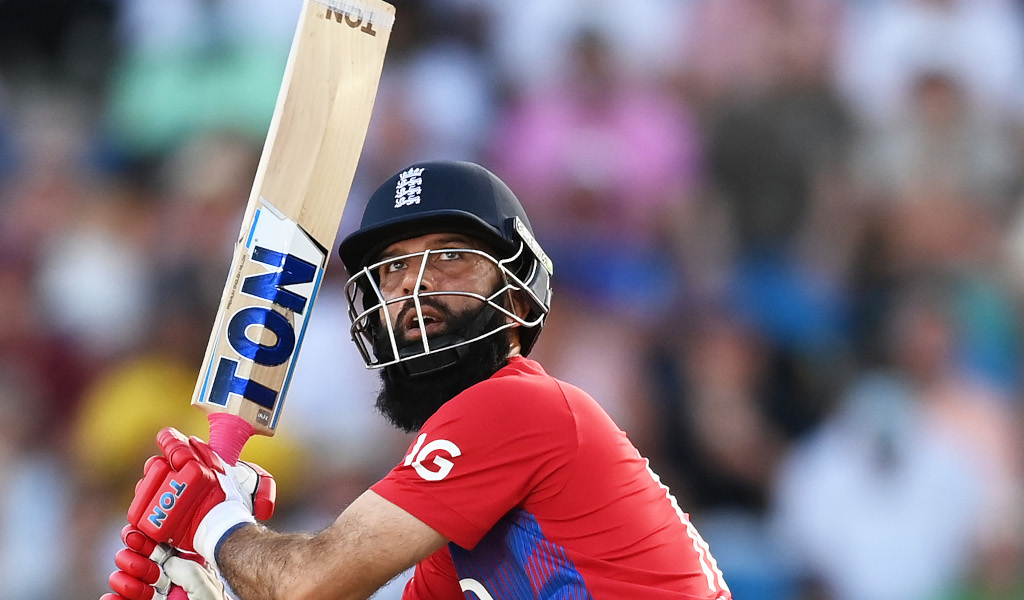 Moeen Ali belted seven sixes, including four in a row off Jason Holder, in an excellent 63 off 28 balls to helped England post 193 for six in the must-win fourth Twenty20 against the West Indies.

Trailing 2-1 in the five-match series, Jason Roy benefited from being dropped on three to amass 52 from 42 balls as England reached 80 for one off nine overs, but wily Windies captain Kieron Pollard dried up the scoring.

Pollard took pace off the ball to frustrate England’s batters to finish with 4-0-23-1, but opposite number Moeen, standing in as England captain because of Eoin Morgan’s series-ending injury, aided England’s cause at the death.

He was particularly punishing of Holder as England added 59 in the last three overs, while Sam Billings, back alongside Chris Jordan, took the tourists’ six count to 15 with two maximums off the last two balls.

Tom Banton got off the mark with a streaky thick edge for four but – in the same over Holder could not hold on to a return catch off Roy – he clothed to mid-on for Kyle Mayers to take a routine catch.

Holder and Sheldon Cottrell were once again setting the tone, with England stuck in the mud on 15 for one after four overs, with plenty of slower balls foxing a frustrated Roy and new arrival James Vince.

However, Vince carved away for four before Roy cleared the Greenidge and Haynes Stand as Cottrell conceded 17 in his third over, while the opener thumped another meaty six off Romario Shepherd as England ended the powerplay on 45 for one.

When Dominic Drakes, son of former Windies fast bowler Vasbert, was introduced into the attack, both Roy and Vince threw their hands at wider deliveries but got four and six respectively over third from thick edges.

Drakes was taken the distance straight by Vince in more conventional fashion before Roy slashed across the line for another six in the over to bring up a 34-ball fifty.

The wily Pollard’s slower balls put the brakes on England’s charge and, when Roy attempted to hit out, he only got a thick edge through to wicketkeeper Nicholas Pooran to end an 85-run stand.

England may have been looking to Vince to steer the innings, but an outside edge was taken at short third as he departed for 34 off 26 balls.

Moeen took England past three figures later on in the 13th over, lap-sweeping Akeal Hosein over short fine-leg for four.

Pollard’s first three overs had brought on 12 runs for England and, although Liam Livingstone launched the Windies captain high over the longer midwicket boundary, the all-rounder still finished with fine figures.

Just 54 runs came in the 48 balls between the start of the 10th over and end of the 17th, but Moeen, on 20 off 16 deliveries, fired England past 150 with four successive sixes off Holder.

Livingstone attempted to emulate his team-mate but hoisted Shepherd high in the air in the penultimate over and was caught at cover before Moeen brought up a 23-ball half-century, including five sixes.

Shepherd lost his radar, sending down three wides, while he was thumped for two more sixes by Moeen, who holed out before Billings added a final flourish.