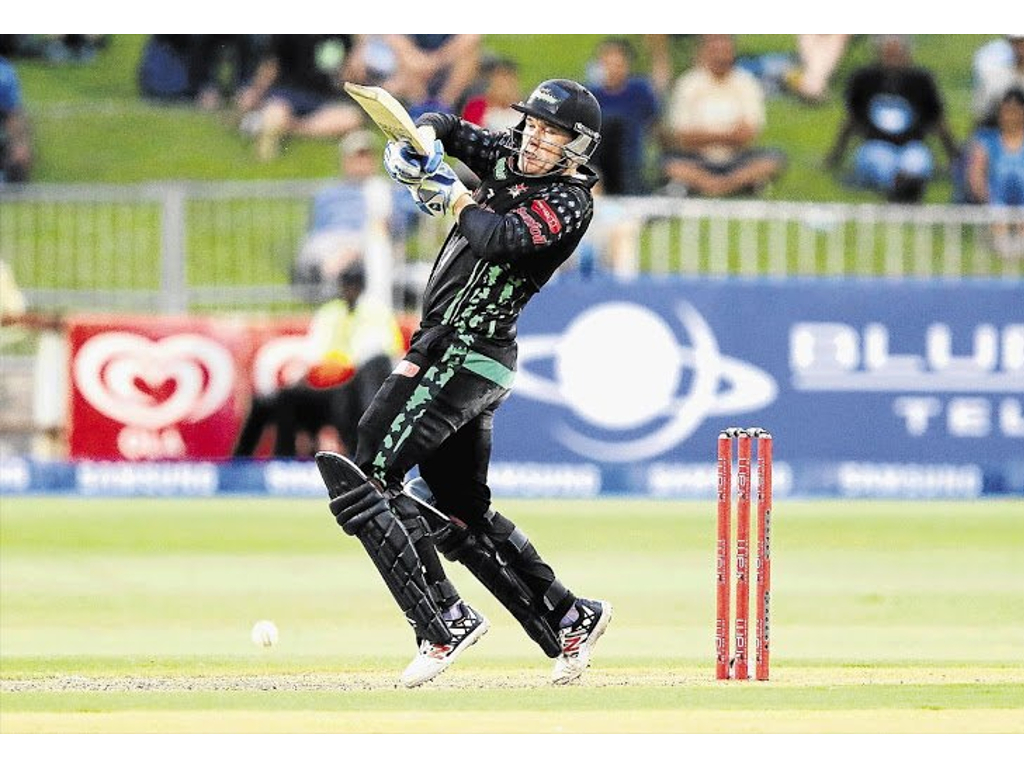 For once it was not the rain that dominated the Dolphins’ match, but rather a flood of runs from Morne van Wyk and Dane Vilas which allowed the Durban side to beat the weather and the Knights by six wickets in their RAM SLAM T20 Challenge clash on Friday night in Bloemfontein.

In their penultimate league match of the competition, some lusty blows from Van Wyk (70 runs off 43 balls), Vilas (51 off 22) and a vicious cameo from Robbie Frylinck (27 off 14) at the death allowed the Durban franchise to chase down the large target of 169 set by the Knights in their rain shortened clash.

The result, with three balls remaining, goes a long way toward securing the Dolphins a place in the playoffs, but nothing is guaranteed and a loss to the Titans on Sunday could still see their playoff hopes sunk.

In other matches the Cobras guaranteed a home semi-final by beating the Titans, who have already secured top spot on the table and will host the first semi-final. The Warriors beat the Lions in a rain-ravaged clash in Potchefstroom to ensure the Dolphins are in pole position for an away semi-final, but they can still mathematically be ousted by the Lions and the Warriors depending on Sunday’s results.

On Sunday the Dolphins host the Titans at Kingsmead, with the Warriors and Cobras meeting in East London and Lions taking on the Knights at Wanderers.

On Friday the Dolphins won the toss and when Keshav Maharaj trapped Patrick Kruger in the first over the Dolphins must have thought their luck had changed. But an hour later former Dolphins golden boy, David Miller, together with Ryan McLaren, looked to have sunk the Durban side’s glory chase.

Miller came to the crease with the match delicately poised with the Knights on 45 for two in the sixth over. The Maritzburg College old boy eased into his innings and when he was joined by McLaren with just seven overs remaining the score was a below-par 83 for four.

The two were brutal on the Dolphins bowlers, particularly Andile Phehlukwayo, who went for 24 runs by McLaren in his final over which was the key to the Knights reaching a daunting target of 168 for four off their 17 overs.

Phehlukwayo cannot take all the blame, however, and 14 extras, including 11 wides, was far too charitable and could have cost the Dolphins their place in the semi-finals were it not for some brutal, clean hitting from the Dolphins batters.

The Dolphins chase did not start well with Sarel Erwee looping an easy catch to mid on off Marchant de Lange in the third over, and when Vaughn van Jaarsveld was caught by Miller in the deep off Eddie Leie, the Dolphins hopes of a semi-final looked to be draining away.

However, Van Wyk produced a superbly balanced innings to carry his bat and provide the backbone of a well-timed run chase. His 70 not out was a mixture of controlled power hitting and patience, but he needed support and some lusty blows from Vilas and Frylinck which allowed the visiting franchise to get ahead and stay ahead of the run rate.

The key overs were the ninth and tenth when Van Wyk and Vilas added 44 runs off Shadley van Schalkwyk and Leie respectively, including Vilas’ 19 runs off an effective two balls when Leie’s no ball, resultant free hit and the next ball all sailed over the boundary ropes.

After losing five matches to bad weather, the Dolphins will have enjoyed the chance to show what they can do out in the middle and with the weather forecast looking good for Sunday, the Durban fans can expect some cricket at last at Kingsmead.