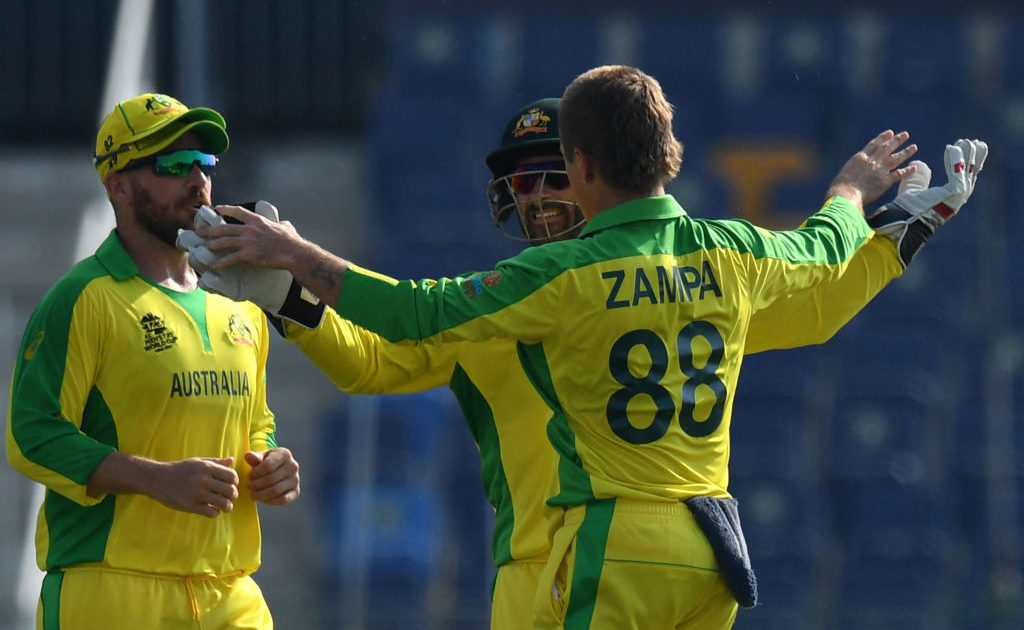 Australia launched the Super 12 stage of the T20 World Cup with a five-wicket victory over South Africa in a low-scoring contest in Abu Dhabi.

Having restricted South Africa to 118 for eight, Australia slipped to 38 for three in reply before Steve Smith and Glenn Maxwell’s partnership of 42 set the platform for Marcus Stoinis and Matthew Wade to see Justin Langer’s side home with two balls to spare.

Josh Hazlewood, Adam Zampa and Mitchell Starc had all picked up two scalps as South Africa lost wickets at regular intervals to leave Australia needing less than six an over at the Zayed Cricket Stadium.

Aiden Markram struck a fluent 40 off 36 balls to top score for the Proteas but he ran out of partners as Australia got their campaign off to a winning start.

After being put in to bat, captain Temba Bavuma got South Africa off to a flyer in the first over by taking Starc for 11 runs, including two lovely fours through the off side.

But that dominance was short-lived as Bavuma was bowled by Maxwell in the second over for 12. Rassie van der Dussen, soon followed his skipper back to the hutch after making just two when he nicked Hazlewood’s first ball behind to Wade.

It went from bad to worse for the Proteas when Quinton de Kock was bowled in bizarre fashion after attempting to flick a Hazlewood delivery on the move, only to see it cannon off his leg and balloon into the air and back onto the stumps.

Hazlewood completed an incredible wicket maiden before South Africa stuttered to 29 for three at the end of the powerplay.

Markram and Heinrich Klassen looked like they were building the first partnership of note before Pat Cummins had the latter caught off a thick outside edge for a run-a-ball 13.

Playing a sole hand, Markram put on 34 for the fifth wicket with David Miller until leg-spinner Adam Zampa rocked South Africa with two wickets in the 14th over.

Miller was trapped in front for 16 before Dwaine Pretorious was sharply caught by Wade for just one to leave the Proteas reeling at 82 for six.

Things did not improve when Keshav Maharaj was run out by Maxwell after slipping when trying to get off the mark from an overthrow.

Markram took his frustration out on the returning Hazlewood, slamming a huge six into the crowd over the leg side, but fell to Cummins when trying to up the ante, with South Africa yet to bring up their 100 with only three overs left.

Some valuable late clean striking from Kagiso Rabada, who made 19 off 23 balls, gave his side something to bowl at as South Africa finished on 118 for nine.

Rabada and Anrich Nortje came charging in at the start of Australia’s chase and the two combined to remove Aaron Finch for a duck in the second over, Rabada clinging on at third man after the Australian skipper slashed hard at a wide one.

David Warner appeared to get things back on track with a couple of boundaries until he was well-caught by Heinrich Klaasen at point as Bavuma’s decision to keep Rabada on for three straight overs paid dividends.

Australia finished the powerplay on 28 for two, one run short of where South Africa were at the same stage but with an extra wicket in hand.

That advantage soon went when Keshav Maharaj had Mitchell Marsh caught at deep midwicket for 11 in the eighth over.

Steve Smith and Maxwell put together a partnership of 42 as they safely navigated the middle overs without much alarm until a super diving catch from Markram off Nortje gave South Africa a sniff.

Smith departed for 35 off 34, annoyed not to take his side home but having left them well-placed, needing 37 from 31 balls.

Markram nearly clinched another spectacular grab, but Wade’s shot off Rabada did not carry and crucially slipped through him for four.

Wade’s improvisation brought him a second consecutive boundary before Marcus Stoinis saw Australia over the line when needing 18 from the final two overs. finishing with 24 from 16 balls as the pair put on a match-winning stand of 40 from the last 26 balls.