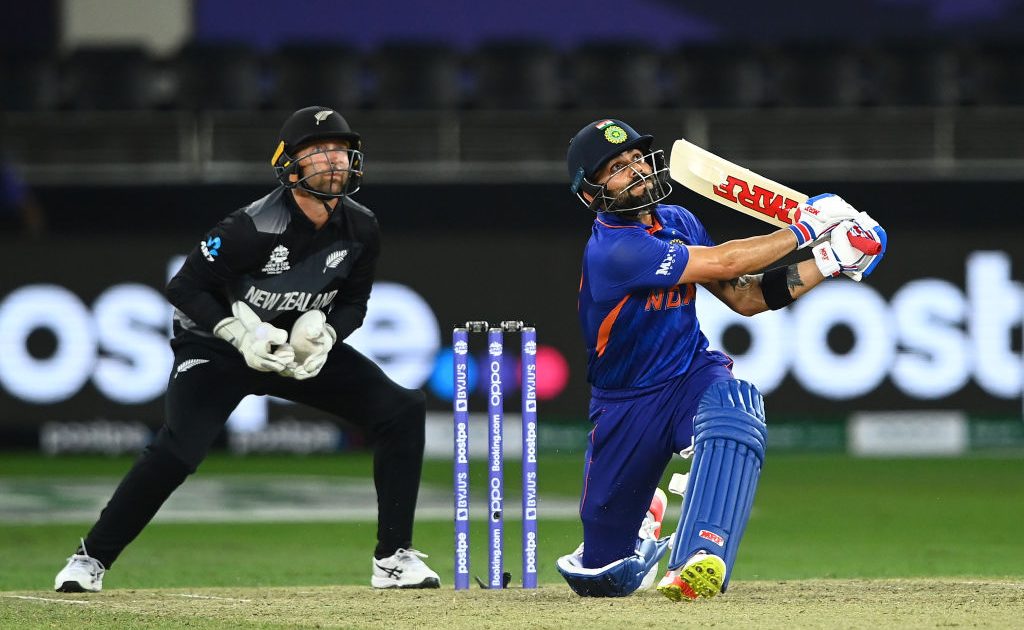 If you’ve been in the UAE over the past couple of weeks, you’ll come to further recognise the value placed on a ticket to watch India play cricket wherever you go.

In a country where 38% of the population is made of Indians which amounts to over three million, the demand to watch Virat Kohli and his men is off the scale.

Last night, the trip to the Dubai International Cricket Stadium from downtown in Dubai to watch England take on Australia took no more than half an hour. Today, it took triple that.

A measure of the extraordinary support that India have got, and yet the palpable pin-drop silence that could be heard for much of the evening epitomised just how miserable Sunday nights in Dubai for Indian fans are starting to become.

Make no mistake, this was a hammering. If last week was a warning sign, then tonight was a call for help. Because India need help now from others, if they are to progress.

Pummelled by Pakistan. Butchered by the Black Caps. The pre-tournament favourites, winless after two games, now face an almighty task to reach the semi-finals in the competition that just over a week ago, they seemed all but destined to win.

For all of India’s flaws, this was quite an outstanding night for New Zealand, adding to their record of defeating India in the big moments.

They are India’s achilles heel.

In 2019, they won the World Cup semi final and earlier this summer, they took home the inaugural World Test Championship. After their dominance in Dubai, Captain Kane Williamson said, “it was a fantastic all-round performance against a formidable Indian outfit” and now they will surely be confident with Scotland, Namibia and Afghanistan to follow, that they can secure a spot in yet another World Cup semi final.

Pre-match Trent Boult stated that he wanted to “mirror what Shaheen did the other night”.

India may have had a week to reflect on that scintillating new-ball spell from Shaheen Shah Afridi but judging by the way they began on Sunday in Dubai, they will need much more than reflection.

Ishan Kishan, coming in to open instead of Rohit Sharma, scored a boundary before falling into the New Zealand trap, clipping one from Boult straight to the man in the deep.

And when Rohit Sharma was dropped first ball, it felt as if India had been having nightmares of left arm seamers.

Boult didn’t quite mirror Shaheen in terms of thrill, but he did enough to limit the Indian batting, constantly threatening and finishing with three for 20 off his four.

The middle overs were painful to watch for Indian fans as both Sharma and Virat Kohli perished to Ish Sodhi. For all the might of India, they were strangled down by an excellent and disciplined New Zealand attack.

Remarkably, there were no boundaries between the start of the 6th over and the end of the 17th. At the interval, the so-called formidable India has mustered a fragile total of 110-7 and the game was all but done.

A week ago, Daryl Mitchell had yet to open the batting in T20 cricket. Just one of two players in the game without any previous IPL experience, Mitchell ensured that the Kiwis wouldn’t make hard work of the run chase.

Until today, his highest score in T20I’s was 34. By the time he was dismissed for 49, in a knock which included four fours and three sixes, the equation was 15 off 44 and the ground had all but emptied.

Player of the match Sodhi was full of praise for his teammate saying, “He (Mitchell) was phenomenal. It was his second game opening the batting in T20 cricket, facing one of the best bowling attacks in the world.

And it’s a huge testament to his character and the backing he’s receiving from our camp who believe in his ability immensely. The way that he played the game was definitely the icing on the cake.”

A job well done and it was left for his skipper to hit the winning runs and seal a clinical win for the Black Caps.