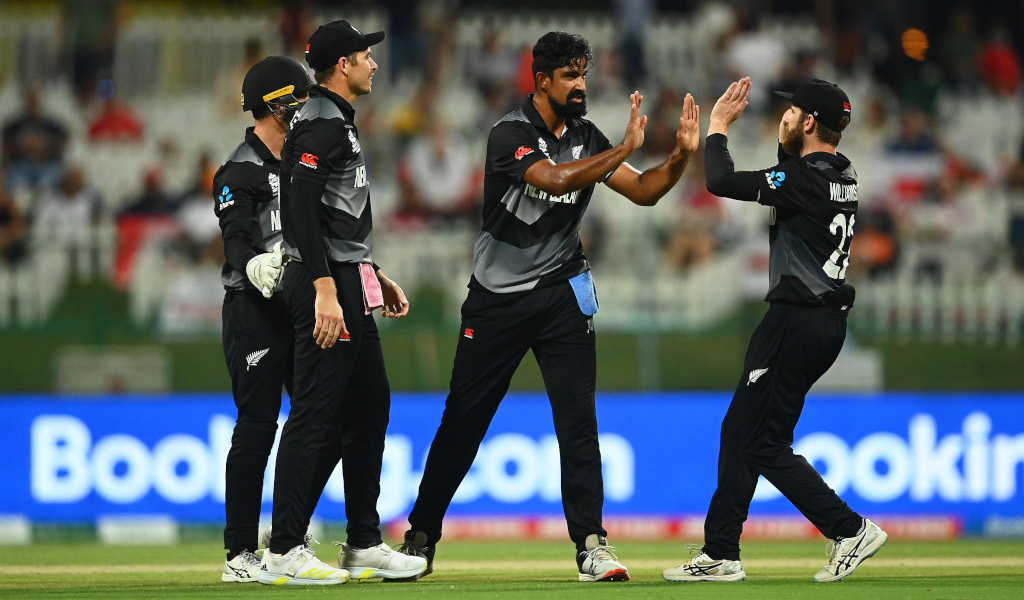 New Zealand take on Australia in the final of the ICC Men’s T20 World Cup in Dubai on Sunday and the role of spin will no doubt have an important impact in determining who succeeds in the all-Antipodean final.

Australia possess the leading wicket-taker since the Super 12s in Adam Zampa who has had a magnificent tournament. For New Zealand, the pairing Ish Sodhi and Mitchell Santner have played in every game of the tournament.

Sodhi and Santner stand 2nd and 3rd respectively in the list of Black Caps T20 wicket-takers with only their teammate, Tim Southee ahead.

Throughout the tournament, the spin pair of New Zealand have posed a threat and offered great control. Sodhi has taken wickets in every match thus far, with nine in six games and Australia will be wary of the 30-year-old. In his nine games against Australia, Sodhi has taken 16 wickets at a strike rate of 12.7.

Talking about their responsibility, whether it’s in the powerplay or especially in the middle of the innings, Sodhi says: “A lot of the time, it’s about figuring out when to be defensive and when to attack with your line, length and your variations.

“The skills that we learn in New Zealand are pretty unique to anywhere else in the world as the boundaries tend to be smaller and that helps.”

Against England in the semi-final, Sodhi picked up the crucial wicket of England opener Jos Buttler before he could take the game away from the Black Caps and a potential battle on Sunday with the Australian opener, David Warner could be key.

Warner was influential in getting Australia’s run chase off to a flyer in their semi-final against Pakistan with a rapid 49 but against Sodhi, he has been dismissed twice in just eight balls.

Apart from being there at the end to embrace his childhood friend and teammate Daryl Mitchell, Santner bowled just one over against England as New Zealand shielded the left-arm finger spinner from the left-handed pair of Dawid Malan and Moeen Ali.

The Australian top seven has just two left-handers so Santner will certainly have much more of a prominent role to play in the final. He has only conceded 95 runs off 93 balls against Australia and it is that ability to build pressure that make him somewhat indispensable to the New Zealand side.

In Dubai when the Black Caps toppled India, Sodhi dismissed Rohit Sharma and Virat Kohli in a Player of the Match performance. It was a game where Santner went wicketless but strangled India going for just 15 runs and bowling 11 dot balls in his four overs. Sodhi said post-match that, “Us bowlers benefit a lot from the pressure that he puts on through that middle period and that can never go unnoticed.”

Both play for the same club in New Zealand, the Northern Districts, and that relationship between the pair is something that has developed over time with Sodhi insisting that it’s a simple but effective combination.

“We started our T20 careers for New Zealand at around the same time.

“We’ve had a great understanding of each other as players, and we spend a lot of time with each other off the park, especially for Northern Districts and that’s really cool as it culminates to great communication on the park.

“To be honest, the main thing we discuss is whether it’s best to use side spin or over spin on the wicket and we try to keep it as simple as that.”

Sodhi is full of praise for his spin partner and what he brings to the side. “Santner’s understanding of spin bowling is massive. He’s played in a lot of competitions around the world and been very successful as well. It’s great to have someone with that knowledge on board.”

And Santner says, “We’ve played a hell of a lot of cricket together and whoever bowls first on a wicket will always relay back to the other. As a unit, a lot of work goes on behind the scenes and we’re really well planned in terms of our preparation.”

Since 1981, New Zealand have never beaten Australia in a knockout game of a tournament, meeting 16 times and losing all of them over a 40-year period. The role of Sodhi and Santner will have a pivotal say in whether the Black Caps can break that duck and win their first ever T20 World Cup.