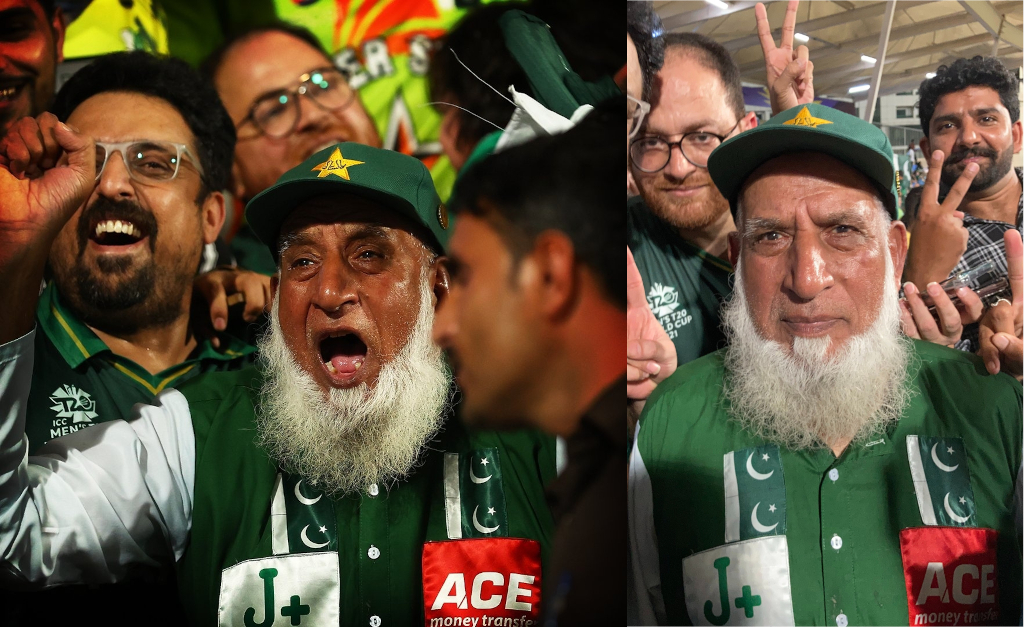 Sunday night in Sharjah is a celebration. For the Pakistani fans, it’s another chance to see their countrymen in action before their semi-final in Dubai.

Their innings against Scotland doesn’t get off to the flyer that their fans expect.

They are 60 for two at the midway stage but that doesn’t really matter.

Their performances thus far have enabled them to see this game as a stopover on their way to the semi-finals.

Skipper, Babar Azam and veteran, Mohammed Hafeez are at the crease and decide to step up the gears.

And as they step up the gears, the noise begins to escalate around the ground. My attention is grabbed by a pocket of vibrance that is intensifying in the stand to the left of the press box.

I head down and notice that at the centre of this buzz is a man that is getting as much attention as the players on the pitch.

Dressed from head to toe in Pakistani colours, with his trademark Shalwar Kameez and his green Pakistan cap with the star, here is a man, at the age of 73 orchestrating the rest.

In a wonderful social media segment before the tournament, 23-year-old Shahnawaz Dahani, who is part of the Pakistan squad, pointed at that star on his helmet whilst packing and uttered in Urdu, “This is my helmet for Pakistan. For this star, you give your life.”

There may be 50 years in difference but that mantra still lives.

I ask Chacha for a chat and he agrees, before asking me whether I know Urdu, which unfortunately isn’t one of my strongest strengths. Never mind. Chacha says proudly, “Don’t worry, I know English very well – I have been to over 500 matches inside the ground and I’ve followed Pakistan for 52 years. I’ve been to more than 150 matches at this ground in Sharjah alone.” Immediately, it’s clear that this is a man with a tale to tell.

Every sentence he says is met by jubilant cheers from the crowds of Pakistani fans surrounding us.

Chacha is adored by his countrymen.

This is a man who has seen history and is essentially a part of history in itself.

Everyone there just seems to be pleased to be sat in his vicinity, constantly asking for pictures and selfies.

Before I can even ask him, he tells me what his first ever game was and his memory is as fresh as ever. “My first match was in 1969 in Lahore, when Pakistan played England.

“That time, the Pakistan captain was Saeed Anwar and the England captain was Colin Cowdrey. Since then I’ve followed Pakistan all over the world and I’ve been to England 13 times alone!”

It’s evident that here is a man who has given his life to the cause of his nation and I ask him why he does this.

He insists that it’s a love for the game and what it represents. Chacha shouts, “Cricket is for enjoyment, not for tension. Cricket is about love, not about fighting. My mission is to promote cricket, promote our country and bring happiness to people.” That, he is certainly doing.

By now, the veteran Shoaib Malik is in and teeing off, at the age of 39, on his way to Pakistan’s fastest ever T20 World Cup half-century and the joint-fastest half-century of the tournament and as they blast 43 off the final two overs, the game is all but put out of Scotland’s reach.

Every boundary is met by a joyous celebration – a cocktail of waving flags, dancing fans and happy faces.

Pakistan look set to remain as the only unbeaten side left in the competition.

The passion and enthusiasm within the crowd is quite something special.

It is cricket’s great shame that this is a side that has far too often been denied the chance to play at home and yet it is testament to the passion and belief of its people that they are still followed by masses wherever they go.

Pakistani cricket will never be short of support. It is a country and a people that live and breathe the game.

And there is now hope that the likes of Australia and England will follow up on their promises to tour the country next year. West Indies are also expected to tour next month.

Now, standing between them and World Cup glory is a semi-final against Australia and a potential final against New Zealand – the same New Zealand that controversially backed out of their tour to Pakistan in September at the eleventh hour.

Perhaps, it is destiny that will bring them together on Sunday in Dubai.

“So Chacha, do you think Pakistan can win it?”

“Inshallah – my players are in full form and Chacha cricket is in full form. I’m 73 but I am young at heart!”

Cue ecstatic shouts of Zindabad around us. The support of Chacha Pakistan lives on. The enigma that is Pakistani cricket rolls on…