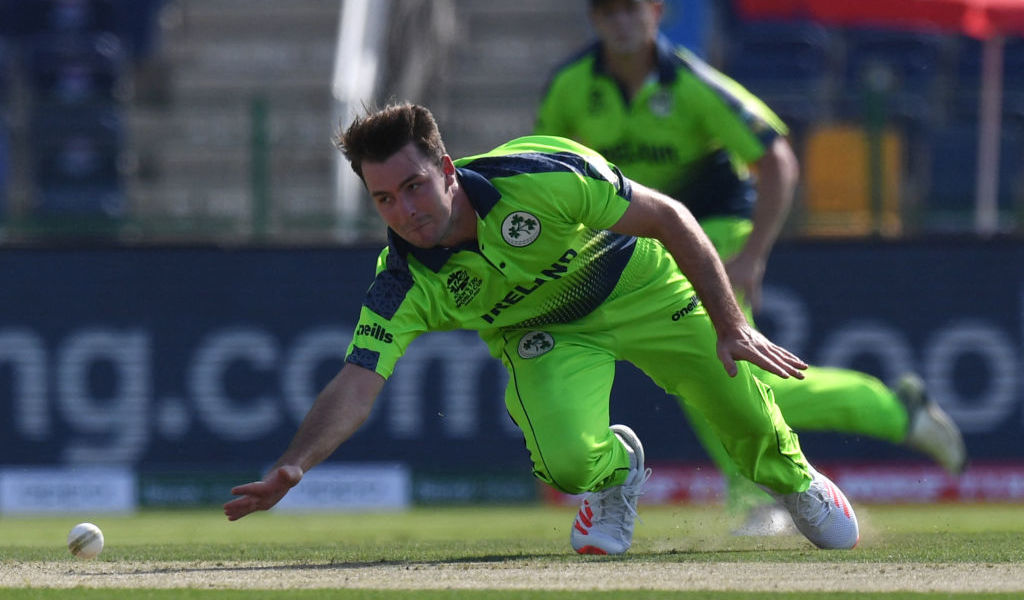 Curtis Campher admitted he was “very fortunate” to make Twenty20 World Cup history by taking four wickets in four balls as Ireland kicked off their campaign with a dominant seven-wicket win over Holland.

The 22-year-old became only the third player to achieve the feat in a T20 international, following in the footsteps of Afghanistan leg-spinner Rashid Khan and Sri Lanka paceman Lasith Malinga.

Curtis Campher says he got lucky

The wickets all fell in a single over as Holland tumbled from 51 for two to 51 for six, including the dismissals of former Essex all-rounder Ryan ten Doeschate and Somerset’s Roelof van der Merwe.

“I didn’t think it was going to happen like that. But I’ve been training hard and (I’m) just very fortunate to get that,” Campher said.

“To be honest I wasn’t really thinking about it, maybe it will sink in a little bit later. I was just trying to do what I wanted to do and we knew when Ten Doeschate walked in that we had to go straight to him and that worked and we just carried on with that.

“That was a plan and we worked on that with our analysts and that does fit into my game, so maybe in a few hours or a few days it might rub off, but at the moment I’m just happy with the win and that’s all that matters.”

The first of Campher’s wickets was a reviewed caught behind, before two players, including Ten Doeschate were trapped lbw, with the hat-trick ball also overturned on review after umpire Rod Tucker originally turned down the appeal against Scott Edwards.

Van der Merwe then followed, dragging the ball onto his stumps to complete four in four for the Johannesburg-born seamer.

He finished with four for 26 as Holland were bowled out for 106, opener Max O’Dowd providing the only resistance of note with 51.

“To be honest, any time you get the opportunity to take a wicket in international cricket it’s a real privilege and I’m just lucky it went my way today,” Campher said when asked if he was relieved by the successful lbw appeal for the hat-trick.

“Nothing else bar that. Any wicket I can do for the team is a real boost.”

On his fourth wicket, he said: “My heart was racing quite high but I just took a few deep breaths at the top of my run and made sure that I just managed my skills. Obviously after that over I didn’t really finish the last over as well as I wanted to but I’m learning, I’m young and I just want to do the best I can.”

Chasing down the meagre target, Gareth Delany top-scored with 44 from 29 balls in an innings which was seen through from start to finish by Paul Stirling, who finished with an unbeaten 30.

Ireland suffered a brief wobble when Kevin O’Brien and Andy Balbirnie were dismissed cheaply but Campher saw them over the line with 29 balls to spare.

Ireland captain Balbirnie admitted he was “delighted” for the bowler.

“He makes something happen. I said that when he played last year against England, he obviously burst onto the scene with a 50 and a couple of wickets,” Balbirnie said.

“The first over didn’t go well for him, but we just broke it down to basics and said bowl it as straight as possible and he did just that.

“I’ve not been involved in too many games where an over like that has happened, so I’m just delighted for him.

“Having come back from a couple of annoying injuries this year, he’s missed quite a bit of cricket and he’s deserved that today.”