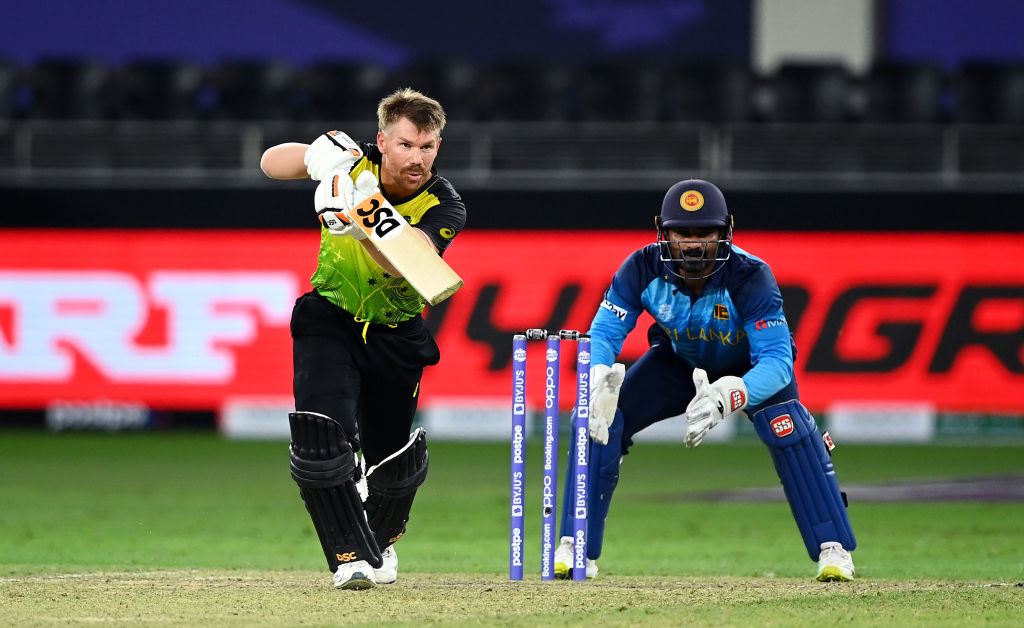 David Warner returned to form at the T20 World Cup as Australia made light work of chasing 155 to record a comfortable seven-wicket victory over Sri Lanka in Dubai.

Warner was given a major let-off on 18 when Sri Lanka wicketkeeper Kusal Perera dropped a regulation chance off the opening batter, who capitalised with 65 from 42 deliveries as Australia won with three overs to spare.

Fast bowlers Mitchell Starc and Pat Cummins earlier took two wickets apiece, as did leg-spinner Adam Zampa, who conceded just 12 runs in his four overs, as Sri Lanka recorded what looked at halfway a par score of 154 for six.

But a 70-run opening stand between Warner and Australia captain Aaron Finch (37) put Sri Lanka firmly on the back foot. Finch was the first to go and while Warner holed out with 25 more required, there was never a sense of peril.

Steve Smith’s unbeaten 28 and a cameo 16 not out off seven balls from Marcus Stoinis helped Australia join England on four points from two Group One games in the Super 12s. The two teams face off in Dubai on Saturday.

Sri Lanka were left to rue losing four wickets for just 16 runs which stunted their innings, while a largely ineffective bowling display coupled with some fielding lapses handed them their first loss of the tournament.

After being asked to bat first, they struggled against Australia’s frontline bowlers but found Glenn Maxwell and Stoinis easier to deal with as the two all-rounders conceded 51 from their combined four overs.

Perera and Charith Asalanka, the joint top-scorers of Sri Lanka’s innings with 35, put on 63 for the second wicket to lead their side to the relative comfort of 78 for one, but they collapsed to 94 for five soon after.

Bhanuka Rajapaksa finished unbeaten on 33 from 26 balls as Sri Lanka ended their innings with a flourish, only for Warner and Finch to come storming out of the traps at the start of the chase.

Chamika Karunaratne was driven firmly through the covers twice by Finch in the opening over, while Lahiru Kumara’s introduction into the attack yielded 20 runs as Australia rocketed to 63 without loss at the end of the powerplay.

By this stage, Warner had been given a reprieve after gloving down the leg-side off Dushmantha Chameera, who had his arms aloft in celebration but dropped them in frustration after watching Perera spill a simple opportunity.

Warner contributed 14 against South Africa at the weekend, having made nought and one in Australia’s warm-ups after being dropped by Sunrisers Hyderabad in the closing stages of the Indian Premier League, but he made sure he took full advantage of the let-off after Finch chopped Wanindu Hasaranga on to his stumps.

Glenn Maxwell was caught in the deep, but a fluent 50-run stand between Warner and Smith whittled down the target. Warner was caught at long-off before Smith and Stoinis got Australia home for a commanding win.