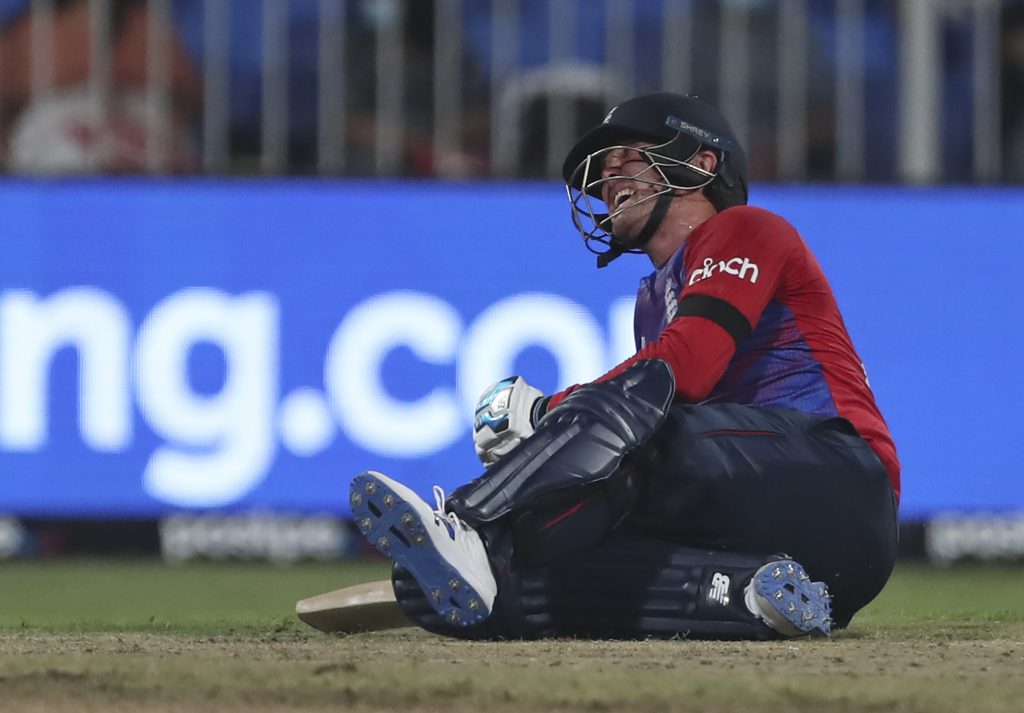 England face a nervous wait on the outcome of Jason Roy’s calf scan which is set to determine whether the in-form opening batter will be available for the T20 World Cup knockout stage.

Roy had to be helped from the field as he retired hurt during England’s first loss of their campaign against South Africa on Saturday, having collapsed in obvious agony after being called through for a single in the run-chase.

He was later seen on crutches in Sharjah, plunging his participation in the remainder of the tournament in immediate doubt. It is understood he should learn his fate on Monday after an assessment on Sunday.

Despite a 10-run defeat against the Proteas, England qualified for the semi-finals as winners of their Super 12s group. Although their joy was obviously tempered when Roy was forced off having made an unbeaten 20 off 15 balls.

England captain Eoin Morgan said afterwards: “We’re all hopeful that he comes through in some manner or there’s some remedy to get him through one, if not two games.

“But we need to do what’s best for Jason ultimately and then the team.”

England arrived in the Gulf without Jofra Archer, Ben Stokes and Sam Curran while they were dealt a blow ahead of the game against South Africa with the news that Tymal Mills’ right thigh strain had ended his tournament involvement.

Roy has amassed 123 runs in five innings at a 30.75 average and strike-rate of 138.2, helping England off to a flyer in most of their outings so far, and Morgan’s side need little reminding of his value to the team.

That was evident during the 2019 50-over World Cup group stage, when a torn hamstring meant he missed the defeats to Australia and Sri Lanka. This before his comeback corresponded with an upturn in fortunes for the eventual champions.

Morgan said: “He’s unbelievably important. He’s a guy that epitomises everything that we are about in the changing room and the way that we play.

“You see how commanding he is at the top of the order, not only in T20 cricket but 50-over cricket as well. He’s as close as we get to surmising how the changing room should play.

“We’re gutted for Jase but also half hoping that he’s OK. For anybody to miss the latter stages of the tournament, particularly when it’s been two guys in two games, that does hurt the mood (of the dressing room).”

James Vince is one of the two travelling reserves and could be parachuted into the squad if Roy is ruled out for England. Fellow batter Sam Billings an option to come into the side and possibly as a direct replacement.

A more likely scenario would see one of Dawid Malan, Jonny Bairstow, Liam Livingstone or Moeen Ali open alongside Jos Buttler, who has amassed 240 runs in five innings at an incredible 120 average and strike-rate of 155.84.