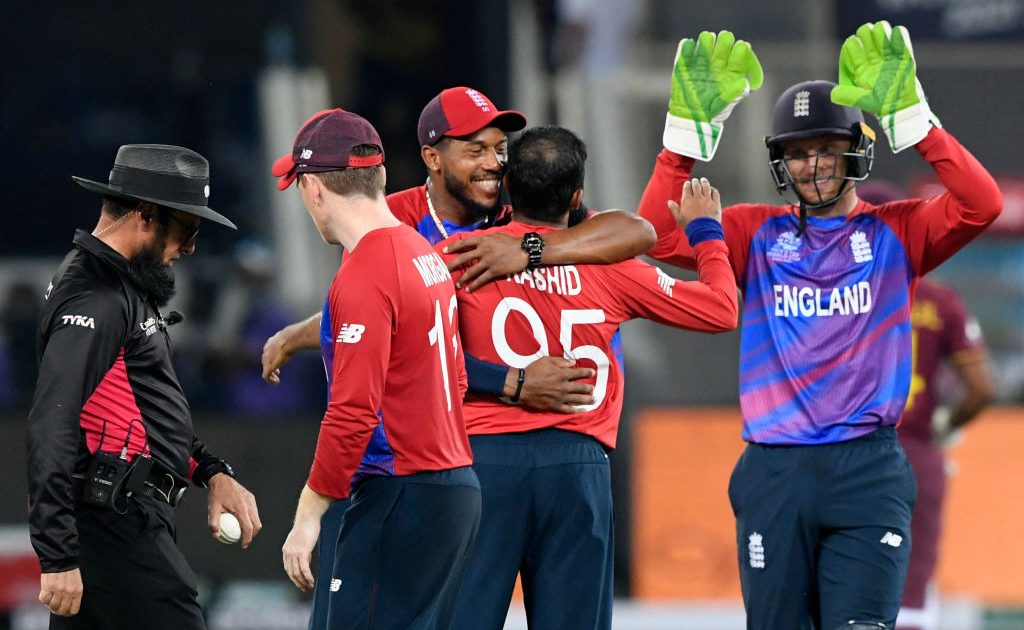 England ended their hoodoo against the West Indies at the T20 World Cup in remarkable fashion, blowing away their opponents for 55 before chasing down the total in only 8.2 overs on a steamy night in Dubai.

This was a scarcely believable start to England’s quest to become the first side to hold both World Cup trophies concurrently, with Adil Rashid’s four wickets for two runs in 2.2 overs the nation’s best bowling analysis in T20s.

Fellow spinner Moeen Ali collected two for 17, as did Tymal Mills in a heart-warming return to international cricket after a four-year injury-enforced absence, as England’s bowlers set the tone for a convincing six-wicket victory.

Several Windies batters played injudicious strokes as the defending champions were castled for the third lowest total in the tournament’s history and the worst by a Test nation following a flawless England fielding display.

This was a rematch of the 2016 final between the sides and the Windies were left needing a bigger miracle than the one Carlos Brathwaite conjured in Kolkata, but it was not forthcoming as England claimed their first win in six attempts against the islanders in this competition.

England, the top-ranked side in this format, were halfway to their target within four overs under lights and, although they slipped to 39 for four, Jos Buttler’s 24 not out from 22 balls got them over the line.

Buttler sumptuously drove the first of his three fours through cover off slow left-armer Akeal Hosein, who was then hoisted over extra-cover by Jason Roy, who briefly flickered before tamely flicking the burly Ravi Rampaul to midwicket to depart for 11 off 10 balls.

Hosein took a return catch off Jonny Bairstow, Moeen was run out after being sent back to the non-striker’s end in a calamitous mix-up with Buttler and, when Liam Livingstone was caught magnificently by a diving Hosein off his own bowling, the Windies sensed an opening.

But Buttler was a soothing presence – alongside captain Eoin Morgan (7no) – and ended matters with a wristy pull off Rampaul’s bouncer.

The evening started with England winning the toss, opting to stick with Dawid Malan, who was tactically overlooked in the chase as Morgan’s side elected for quick runs, while Mark Wood was omitted because of an ankle niggle that has required an injection.

After the players took a knee at the outset, Evin Lewis struck an early blow with a towering six off Moeen. It was a boom or bust approach throughout from the Windies as Lewis aimed another mighty blow at Chris Woakes’ 69.6mph slower ball, only for Moeen to take a blinder over his shoulder running back.

Fellow opener Lendl Simmons and then Shimron Hetmyer made ill-disciplined hacks off Moeen and, while dangerman Chris Gayle bristled briefly, eventually top-scoring with 13, he fell to left-armer Mills, who claimed his first England wicket since February 2017 when a mistimed pull was caught by a backpedalling Malan at midwicket.

Dwayne Bravo scythed low to Jonny Bairstow, close in at backward point, while Nicholas Pooran endured a brief but torturous stay at the crease, making just one off nine balls before getting a tickle to a big mow off Mills.

Morgan had waited until the 11th over to introduce frontline spinner Rashid, who nevertheless struck gold with his first ball, a slider that skidded in and beat the tentative prod of Andre Russell, who was bowled through the gate.

Windies captain Kieron Pollard and Obed McCoy both holed out to successive balls from Rashid. There were ironic cheers from the 2,129 in attendance when the Windies brought up their 50 before Rashid wrapped things up after 14.2 overs when Rampaul was cleaned up after hitting fresh air with a wild swing.