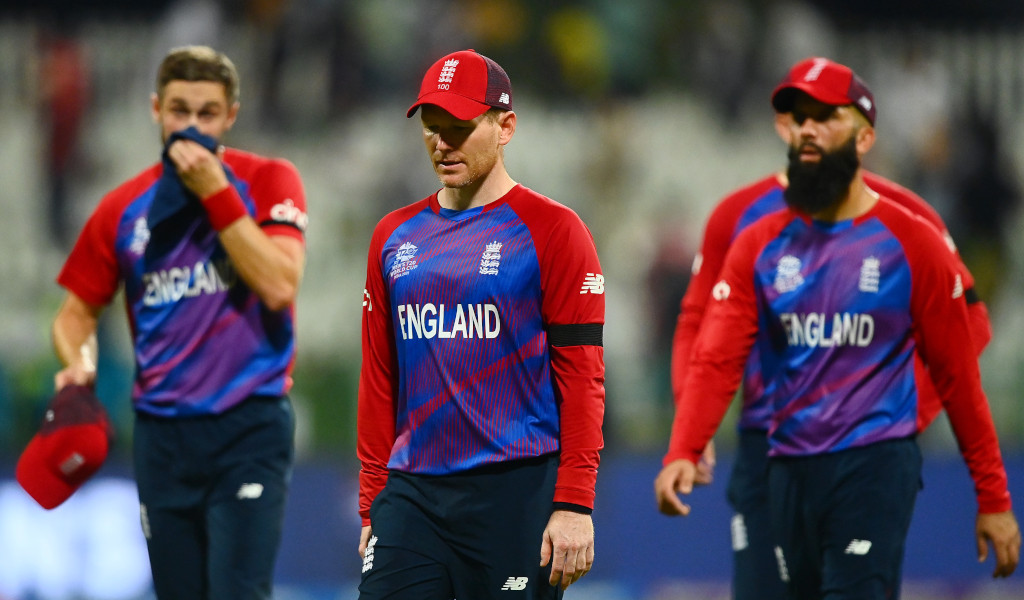 Eoin Morgan described the England dressing room as “devastated” as their hopes of T20 World Cup glory were ended after an agonising semi-final defeat against New Zealand but he has resolved to stay on as limited-overs captain.

New Zealand laid the ghosts of the 2019 50-over World Cup final to rest at a blustery Abu Dhabi as Daryl Mitchell’s 72 not out from 47 balls helped the Black Caps chase down 167 with five wickets and six balls to spare.

England were aiming to become the first nation to hold both white-ball World Cup trophies simultaneously but that bid will roll over to Australia in 12 months’ time, where Morgan is optimistic of still being at the helm.

“I hope so, I’m still offering enough within the side,” he said at the post-match presentation ceremony. “I absolutely love playing cricket at the moment for that changing room.

“The guys give everything, they’re at the forefront of change on and off the field and we’ve a lot of things to be proud about. I’m incredibly proud to be the leader.”

England’s campaign started without Jofra Archer, Ben Stokes and Sam Curran while injuries robbed them of Tymal Mills and Jason Roy ahead of another absorbing showdown against New Zealand, who won what seemed an important toss.

As well as the unforgettable World Cup final two years ago, England had beaten these opponents at the same stage of the 2016 edition of this tournament and they prevailed 3-2 in the last T20 bilateral series in New Zealand in 2019.

Moeen Ali’s unbeaten 51 from 37 balls was not his most fluent innings on a pitch where timing the ball was difficult but his efforts underpinned England’s 166 for four, with Dawid Malan (41) and Jos Buttler (29) making handy cameos.

Chris Woakes made inroads into the batting in each of his first two overs, removing Martin Guptill and Kane Williamson, and England were in pole position with New Zealand needing 57 from the last 24 balls.

But Chris Jordan conceded an eyewatering 23 in the 17th over as Jimmy Neesham’s jaw-dropping 27 off 11 balls turned the tide before Mitchell’s belligerent blows off Woakes meant the last over was redundant.

“We’re devastated,” Morgan said. “I think the 11 guys that took the field gave absolutely everything. I’m extremely proud of the performance that they put in but the Black Caps have outplayed us.

“To be on the wrong side of a close game is not easy to take. I thought we fought unbelievably well on a wicket that didn’t necessarily suit our batting, but we managed to post in and around a par score.

“We were brilliant with the ball. We threw everything at them and I wouldn’t change anything. We were right in the game probably until Jimmy Neesham came to the wicket, if not ahead of the game.

“We’ve played against Jimmy a lot. He’s not struck the ball like that against us, ever. It’s a fantastic cameo in high-pressure circumstances when his team needed it. You have to take your hat off to him. He played really well.”

Neesham came so close to delivering for New Zealand in that 2019 50-over World Cup final, when England prevailed on boundary countback alone after tied scores in regulation and a super over, so it was fitting he came to the fore.

Two meaty heaves off Jordan brought leg-side sixes – the second after Jonny Bairstow’s knee had touched the rope before completing a relay catch with Liam Livingstone – while he also took Adil Rashid the distance over midwicket.

His innings ended when Morgan held on to a tough chance at cover but opener Mitchell then took centre stage. He led the recovery from 13 for two and had taken just 22 off his first 23 balls before hitting his stride.

It was ultimately an innings timed to perfection. With New Zealand requiring 20 from the last 12 balls, he took down Woakes with back-to-back sixes and then a four from the final delivery of the over to start the celebrations.

“It never felt like it was out of our grasp,” Mitchell said. “The way that Neesh came out and really dominated that one over really set the momentum heading into those last few, so I take my cap off to him. He played a hell of a knock.

“It’s the nature of finals cricket. It’s always a game of inches and we were lucky we got the momentum right at the end. I can imagine it was a hell of a game to watch. I take my hat off to England. They’ve had a great tournament.”

New Zealand, who shed their tag as bridesmaids by winning the inaugural World Test Championship final in June, are just one victory away from a remarkable double and they will take on either Australia or Pakistan in the final.

“It will be cool whoever we play against,” Mitchell added. “It’s a World Cup final, it’s going to be awesome, and I know we’re going to walk out with a smile on our face and enjoy it as much as we can.”