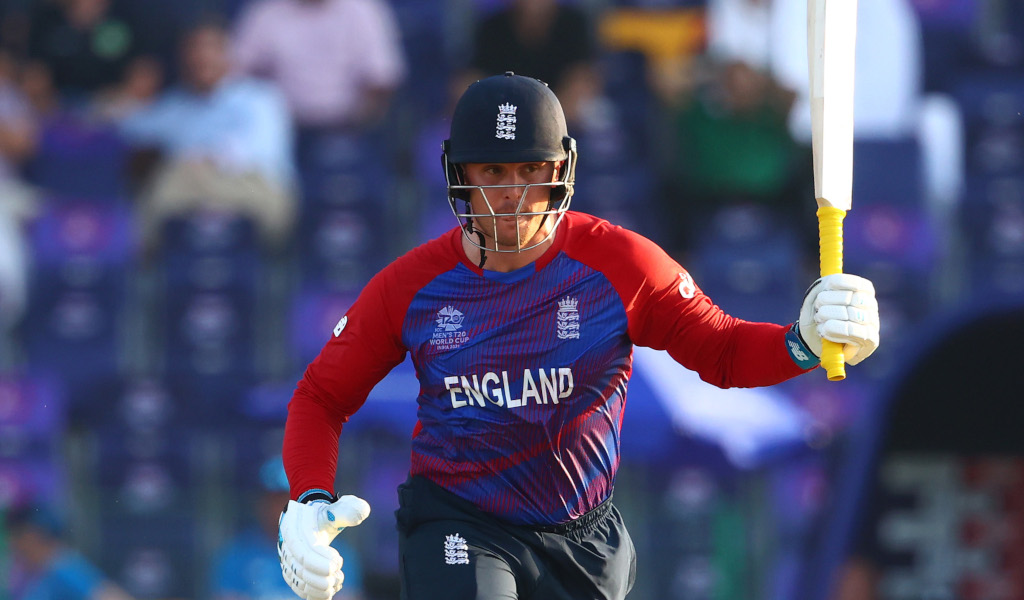 Jason Roy’s 61 off 38 balls made sure England easily negotiated a potentially tricky chase of 125 as they continued their excellent start at the T20 World Cup with an eight-wicket victory over Bangladesh.

England had skittled the West Indies for 55 en route to a six-wicket win in their tournament opener and, despite the overbearing heat in this day fixture in Abu Dhabi, another disciplined performance in the field restricted Bangladesh to 124 for nine.

Tymal Mills (three for 27) ended the innings with wickets from successive deliveries after Moeen Ali had earlier taken two in two before Roy took centre stage as England triumphed with 35 balls to spare.

Roy’s innings in his 50th T20, where he reached his fifty off just 33 balls, contained five fours and three sixes, and while he was dismissed with 13 more still required, Dawid Malan and Jonny Bairstow saw England over the line.

This was the first T20 between the teams but England needed no reminders of Bangladesh’s capacity to spring a surprise in global tournaments after the Tigers eliminated Eoin Morgan’s side at the 2015 50-over World Cup.

But there was rarely any sense of an England loss in the Gulf on Wednesday as they allowed Bangladesh few occasions to cut loose, with the economical Chris Woakes taking one for 12 while Liam Livingstone collected two key wickets.

England live up to billing

England, the number one ranked side in the world, unsurprisingly opted for an unchanged line-up in this Super 12s contest after their impressive win over the Windies, and were asked to bowl first after losing the toss.

Moeen was once again entrusted to open the bowling after setting the tone against the Windies and he was granted another over here after twice being driven by the purposeful Liton Das, whose expansive approach proved his undoing when he top-edged a sweep into the deep while Mohammad Naim injudiciously clothed the very next ball to mid-on.

Woakes was probing at the other end, proving difficult to get away as he bowled in tandem with Moeen for the six-over powerplay, and he chipped in with the wicket of Shakib Al Hasan, who spliced a pull to short fine leg.

Adil Rashid is not renowned for exceptional fielding abilities, but he took a stunner over his shoulder by running to his right and plucking the ball out of the air to see off the dangerous Shakib.

Mills dropped a difficult chance to reprieve Mushfiqur Rahim, who alongside captain Mahmudullah led Bangladesh into safer waters from 26 for three. But with the first overs of Mills and Chris Jordan proving expensive, Livingstone’s mix-and-match spin led to a breakthrough as Mushfiqur missed a reverse sweep and was trapped in front.

Mahmudullah then attempted to take down the part-timer but sliced to backward point. Either side of those wickets a calamitous mix-up led to the run-out of Afif Hossain, sent back after attempting a second from a Mills misfield.

Rashid was a little off the boil as he conceded 35 from his full allotment, 17 of which came off the penultimate over as Nasum Ahmed clobbered two leg-side sixes, the only two occasions Bangladesh cleared the rope. But England ended the innings with a flourish as Nurul Hasan nicked off before Mills lit up the stumps of Mustafizur Rahman.

England losing four wickets in their miserly chase against the Windies, as they sought to buffer their net run-rate, might have given Bangladesh optimism they could pull off an unlikely victory.

But from the moment Roy cut wide of point for four off Shakib’s first ball, there was never a sense that England could implode, even if the opener got a slightly fortuitous inside edge for another boundary off Mustafizur.

Jos Buttler slammed Shakib for a straight six but an uppish back foot punch was caught in the deep for a run-a-ball 18, bringing Malan out to bat for the first time in the tournament, having been persistently shuffled down the order last time out.

The reason given was to allow England’s big-hitters to reel in the total sooner, but he was a capable foil for Roy here, adroitly manoeuvring the ball into gaps to allow his more dashing partner the opportunity to tee off.

Roy took Nasum and then Shoriful Islam the distance to bring up his seventh fifty in this format for England. He perished to Shoriful later in the over before Malan (28 not out) and Bairstow (8no) got England home.