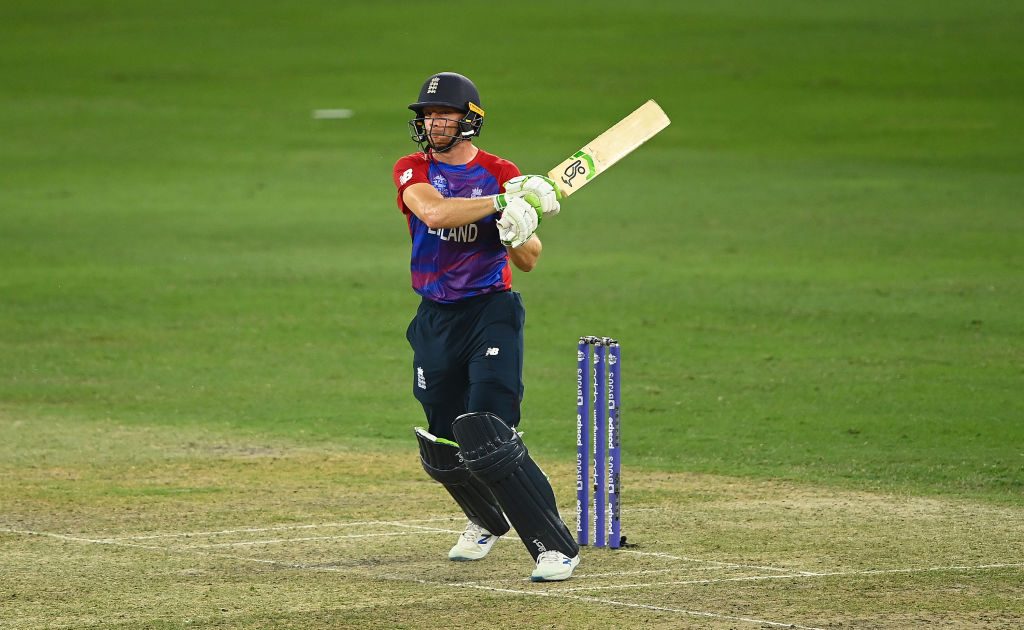 Eoin Morgan believes Jos Buttler is “changing the game” in limited-overs cricket after England made a real statement of intent at the T20 World Cup with an eight-wicket thrashing of Australia.

A virtuoso 71 not out from just 32 balls from Buttler included five fours and five sixes as England chased down 126 with 50 balls to spare to take a major stride towards the semi-finals after their third successive Super 12s win.

Buttler was unfazed at coming up against a highly-regarded bowling line-up in Dubai as left-armer Mitchell Starc was twice swatted back over his head, as was leg-spinner Adam Zampa on a chastening night for the Australians.

Morgan was left purring in the dugout, much as he was when Buttler thrashed England’s fastest one-day ton at the same venue five years ago, and thinks the opener is spearheading a revolutionary approach to white-ball batting.

“When he comes off like that, it’s very difficult to stop him,” Morgan said. “I think he’s certainly one of our players – and there are a few of them – that are at the forefront of changing the game.

“He’s one of the best players in the world but yet he’s still trying to improve his game and get better against every single bowler that he faces. It’s not just targeting bowlers that might suit him, it’s every bowler.

“There was a game that we were talking about while he was going bananas, back in 2016, where he scored a 46-ball hundred against Pakistan in a 50-over game where very similarly he just seemed to hit the bat over and over again.”

England had blown away the West Indies for 55 then restricted Bangladesh to 124 for nine before comfortably winning by margins of six and eight wickets respectively, but Australia were thought of as a step-up in opposition.

Australia, like England, had started their campaign with two wins but were largely subdued as they stumbled to 125 all out, with Chris Jordan claiming three for 17 while Chris Woakes was outstanding early on in taking two wickets.

It came after Morgan had called correctly at the toss, electing to field, and with England overhauling Australia’s score with ease, the chasing side have now won 17 of the 20 matches held in the United Arab Emirates so far.

“That’s a pretty convincing win,” Morgan said. “I thought we bowled again brilliantly and fielded brilliantly. I thoroughly enjoyed the chase and I’m enjoying myself now.”

All three of England’s wins have come batting second and as they prepare for fixtures at the spin-friendly venue of Sharjah against Sri Lanka on Monday and South Africa next Saturday, Morgan is prepared for greater tests.

England’s top-order have done the heavy lifting when it comes to the batting but Morgan reckons those lower down may get a chance to prove their value over the next few days as they try to finalise a spot in the knockout stages.

“I think we’re going to have to throughout the tournament,” the England captain said about the possibility of batting first. “We’ve spoken about it, what might change if anything.

“We’ve had a really good run of it so far and I think the whole of our top seven or eight guys, we will need at some stage.

“We go to Sharjah in two days’ time and then again on Saturday, we’ll probably be taken more out of our comfort zone than we have been both here and in Abu Dhabi. Another challenge we’re looking forward to.”

Australia captain Aaron Finch held his side’s innings together with 44 from 49 balls after they had slipped to 15 for three and then 21 for four, while they took 50 runs in the last four overs thanks to those down the order.

But Buttler’s display ensured England emulated the margin of victory in the 2019 50-over World Cup semi-final between the teams and Finch admitted his side were thoroughly second best.

“They completely dominated us from the start,” Finch said. “They’re a dominant side, no doubt. We’ve seen that for the last couple of years. But we had a bad day as well.”