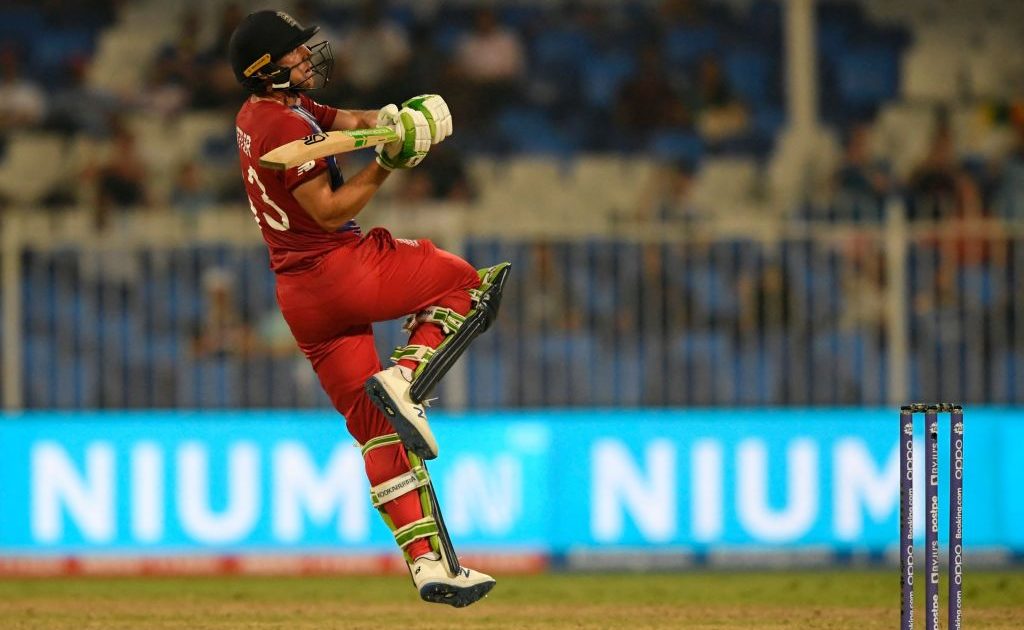 Jos Buttler led England out of their first mini-crisis of the T20 World Cup and to the brink of the semi-finals as his maiden international century in the format underpinned a 26-run victory over Sri Lanka.

England were asked to defend a total for the first time in the tournament following three commanding wins chasing and they were initially suffocated by Sri Lanka’s bowlers after lurching to 47 for three from 10 overs in Sharjah.

Buttler, fresh from match-winning heroics against Australia, reined in his aggressive instincts to begin with, taking 45 balls to reach fifty, before exploding in thrilling style to finish unbeaten on 101 from 67 deliveries.

He clattered the final ball of the innings for six to reach his ton and steer England to 163 for four, the bulk of which was made up of a 112-run stand between Buttler and Eoin Morgan, before Sri Lanka responded with 137 all out.

Adil Rashid, Moeen Ali and Chris Jordan took a couple of wickets apiece, but England’s fourth Super 12s win which all but secures their passage through to the knockout stages was soured by a right quad injury to Tymal Mills.

The left-arm paceman pulled up midway through his second over and his absence for the remainder of the match meant Morgan had to juggle his options on an evening where the dew proved challenging for England’s bowlers.

Morgan had earlier made 40 off 36 balls, going through the gears after being nine off 20 at one point, before being bowled by Wanindu Hasaranga, whose efforts of three for 21 with the ball and 34 with the bat were in vain.

But the evening belonged to Buttler, who joined Alex Hales, Dawid Malan and Liam Livingstone as the only English men to register a T20 international century, with England showing another string to their bow after losing the toss.

They were put into an awkward position in the powerplay as Jason Roy misread a googly, castled after missing a full-blooded sweep to one that skidded on, while Hasaranga had his second wicket with an identical delivery when an advancing Jonny Bairstow was beaten on the inside edge and given lbw via a review off his first ball.

Either side of those dismissals, Dawid Malan’s quiet tournament continued after being bowled through the gate by Dushmantha Chameera, leaving Buttler and Morgan with a sizeable rebuilding job.

Morgan, in particular, struggled to beat the in-field, with probing spinner Maheesh Theekshana able to get through his overs for the cost of 13 runs.

But, in avoiding a collapse, England were well stocked with batters for a late-innings charge, kickstarted in the 13th over when Buttler cleared the midwicket boundary for England’s first six.

Morgan joined in the fun with the first of three sixes in a Lahiru Kumara over which yielded 22 as he then felt Buttler’s power.

Morgan was bowled by Hasaranga in the penultimate over, at the end of which Buttler needed 13 for his first three-figure score in this format.

He had a stroke of luck on 93 when Pathum Nissanka spilled a difficult chance running in from the boundary and then gratefully accepted a leg-side full toss last up from Chameera to bring his ton.

He raised his arms aloft before being embraced by Moeen after becoming the first English man to record a century in all three international formats.

And there was no keeping Buttler out the game as he whipped off the bails to run out Nissanka in the first over of Sri Lanka’s reply following Morgan’s pick-up and throw.

Sri Lanka realistically knew they needed a win to keep their hopes of reaching the knockout stages alive and they attempted to take the attack to an England bowling line-up that has been collectively excellent to lay the foundations for comfortable wins over the West Indies, Bangladesh and Australia.

There were a couple of occasions where Sri Lanka looked to be putting England under pressure, but Morgan’s side refused to buckle.

Charith Asalanka and Kusal Perera were both out to ugly hacks off Rashid, while Avishka Fernando played around a full and straight one off Jordan.

Bhanuka Rajapaksa took 10 runs in two balls off Chris Woakes but then holed out to long-on to leave Sri Lanka on 77 for five after 11 overs.

England’s bowlers occasionally struggled to grip the ball because of the evening dew, while they were dealt a further setback when Mills limped off the field in the 14th over.

But Sri Lanka were always behind the rate and England held their nerve, with Roy and substitute fielder Sam Billings combining on the boundary to end Hasaranga’s counter-attack, which ultimately proved decisive.