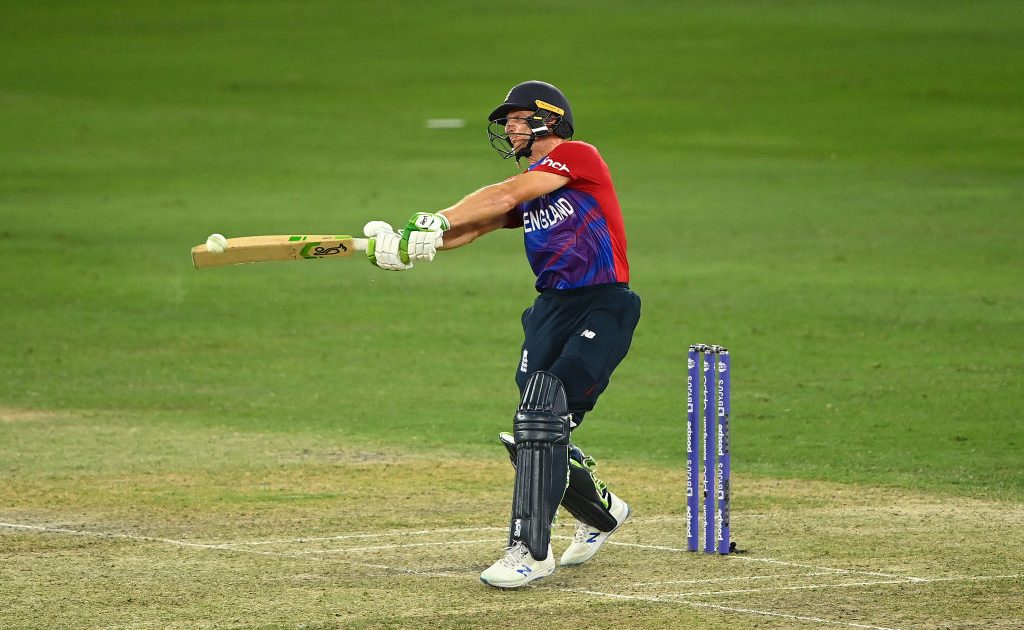 Jos Buttler believes the influential presence of England team-mate Jason Roy and an enjoyable practice session on the eve of their T20 World Cup against Australia were the twin catalysts for his electrifying knock on Saturday.

Buttler put the old enemy to the sword with a dizzying 71 not out from 32 balls as England’s made light of a target of 126 to claim a third commanding win in the Super 12s that has put them on the brink of reaching the semi-finals.

Australia possess a vaunted bowling attack but England raced to 66 for none after the powerplay, with Roy shuffling down the pitch and slapping Josh Hazlewood and Pat Cummins for boundaries before Buttler took centre stage.

Left-arm quick Mitchell Starc was deposited into the stands off successive deliveries while leg-spinner Adam Zampa was also hit for two sixes by Buttler, one of them measured at 105 metres, as England claimed an eight-wicket win.

Buttler admitted he had been finding the United Arab Emirates wickets a struggle up until finding his feet in a training session on Friday night and credited opening partner Roy for setting the tone against Australia.

He said: “Some of the practice wickets have been a bit tricky but I managed to have some great practice the night before. I think all the batters enjoyed the practice. It’s nice to put your hands through a few again, have some fun and freedom.

“We didn’t have any scoreboard pressure. Just keep imposing ourselves on the opposition is the way we’ve championed trying to play. We don’t try and play it safe so if we talk that way, we have to go out and play that way as well.”

Buttler’s innings emphasised his reputation as one of the best white-ball performers in the world and England captain Eoin Morgan insisted his deputy is “changing the game” with his approach to batting in the short formats.

Jos Buttler at the heart of England success

Buttler is also a central figure in England’s Test team and it was put to him that his innings could have had an impact on Starc, Hazlewood and Cummins ahead of the Ashes despite the contrasts between red and white-ball cricket.

England’s wicketkeeper-batter laughed off the suggestion and joked: “Maybe I should try and play the same way, I might be a bit more successful!”

England will be looking to maintain their 100 per cent record in the tournament against Sri Lanka in Sharjah on Monday, having seen off the West Indies, Bangladesh and Australia after batting second on each occasion.

Chasing teams have won a large proportion of the contests so far and, while Buttler speculated that could change he was adamant that England’s fortunes have not merely come down to the coin toss as he hailed their bowling efforts.

The Windies were blown away for 55, Bangladesh were restricted to 124 for nine while Australia limped to 125 all out, as England have been collectively outstanding with ball in hand and in the field on all three occasions.

Buttler, who did accept England would have to find a formula to win if they bat first in future, said: “The games we’ve played we’ve pegged the opposition back really early so I think we’ve restricted teams to under par scores.

“We haven’t seen a big benefit in the matches we’ve played, I wouldn’t say. As the tournament goes on, as the wickets maybe become more tired, maybe the advantage will swap to batting first.

“I think that’s one challenge we’re going to have to work out as a side as well, if we lose the toss, or we choose to bat first, how are we going to approach our innings to get to a score that we think is defendable?”

Mark Wood is rated as 50-50 for a return against Sri Lanka, with the express fast bowler missing all three of England’s games because of an injury to his left ankle that has required a pain-killing injection.