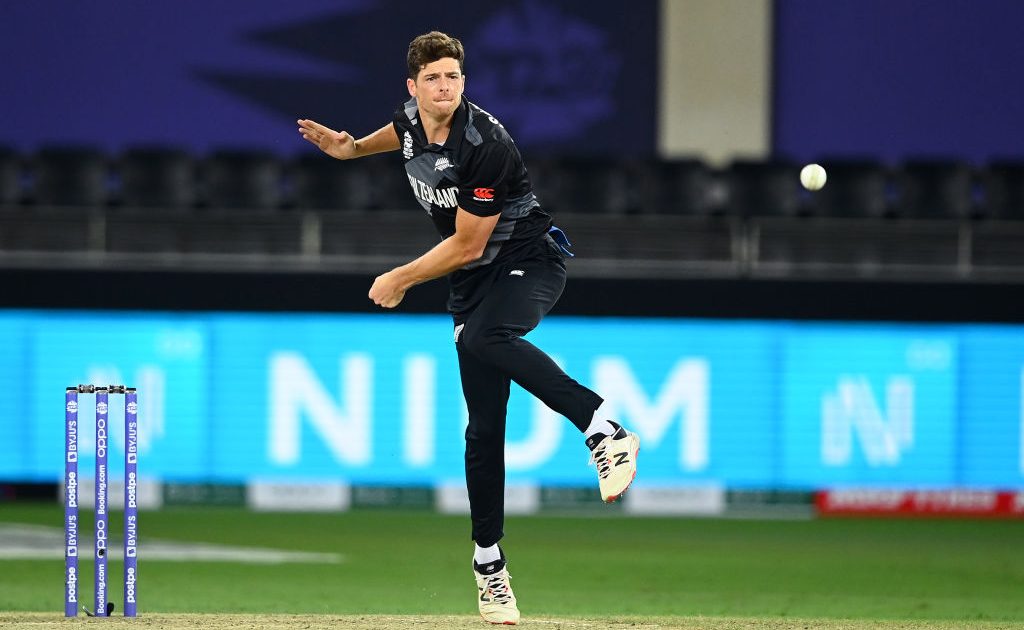 There’s a real workmanlike feeling about the manner in which Mitchell Santner goes about his business.

Time after time, he gets the job done without causing too much of a fuss.

In a World Cup where the importance of spin is further heightened by the slowish surfaces in the UAE, the left-arm finger spinner is one of Kane Williamson’s most crucial assets, as New Zealand look to add the ICC Men’s T20 World Cup to their ICC World Test Championship triumph earlier this year.

Six years after making his debut, the 29-year-old is now a key figure within the Black Caps setup, with over 150 caps across all formats.

They may not be the most devastating but they are some of the most economical. He is going at less than a run-a-ball and his teammates would be the first to tell you just how pivotal it is to build up that pressure in the shorter format of the game.

After a close defeat to in-form Pakistan, New Zealand outclassed pre-tournament favourites India in what was essentially a must-win game, before wins against Scotland and Namibia.

A win against Afghanistan on Sunday will seal their place in the semi-finals and Santer believes that this Black Caps side can go all the way.

“You could see there was a buzz in the field with the guys (against India) and we knew it was an important match after that niggly loss against Pakistan.

“Everyone stepped up and it was backed up in the field. We didn’t let them get any momentum and it was a pretty good all-round performance,” says Santner. “We know that if we play our best cricket, we can beat anyone.”

Against India, he bowled 11 dot balls and went at just 3.75 runs an over without conceding a boundary.

The control that he and his spin partner, Ish Sodhi, had over the game helped ensure that India didn’t manage a single boundary for 71 balls in the middle of their innings.

Those numbers are even more ridiculous when you consider that the same renowned Indian batting order hit the highest total of the tournament so far, just three nights later against Afghanistan.

For all the formidable might that India possess, they have often come unstuck against Santner, Sodhi and New Zealand.

In the 2016 edition of this tournament, both combined to take seven wickets as India were bowled out for just 79 and then in the 50-over World Cup in 2019, Santner bowled a clutch spell conceding only five runs in five overs to strangle India in the semi-final.

Santner reckons that bowling a consistently tricky length is integral to his success within the format, at a pace that makes it harder for the batter to use their feet and at a length that is just short of being able to be driven away.

He says, “You’re coming up against some quality batters and when you’re hitting that length consistently, trying to bowl hard into the wicket, it can be quite challenging and I guess they have to make it play.”

It’s a first-time experience for Santner playing in the UAE, initially as part of the IPL-winning Chennai Super Kings franchise before joining up with the New Zealand squad.

Santner didn’t get a game in the IPL but he says just how valuable it was to acclimatise to the conditions.

“It was nice to be involved, even though I didn’t play, but to be familiar with the conditions and see what works and what doesn’t work out here. The wickets aren’t raging, but the odd ones are slow,” says Santner.

“Each ground is extremely different – Sharjah stays lower, Dubai has a bit more bounce, Abu Dhabi is pretty good as well. In Dubai, that hard length at the top of the stumps seems to work. It’ll come down to which team can adapt the best to the different conditions.”

A win on Sunday would mean a probable semi-final against an England side, that is yet to taste defeat in the tournament.

Santner points out that it is all about taking one game at a time, however he admits that England are looking extremely strong, especially with Jos Buttler in imperious form.

“They’re on a roll at the moment. They’ve got a very good team. It looked like a challenging wicket in Sharjah (against Sri Lanka) but they were able to adapt.

“The last couple of innings from Jos have been pretty special.

“Everyone knows he’s a world class player and he’s showing it now.

“The way he took down Australia was very impressive and then against Sri Lanka, the way he bided his time and took it to them at the end. It was a very special knock.”

Asked about the prospect of another Super Over, like the last time England and New Zealand met at a World Cup in that memorable 2019 final, all Santner can do is laugh.

“Hopefully not! The last time we played India in New Zealand we had two Super Overs in a five match series and lost both of them. I don’t know what it is about us and Super Overs but we’re due to win one actually…”