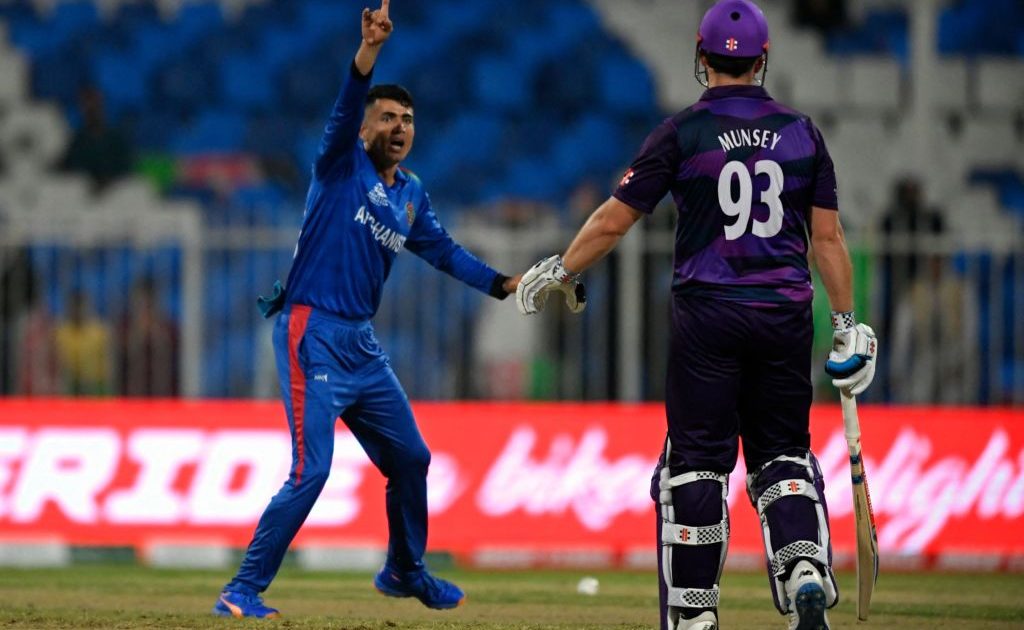 Scotland were brought back down to earth at the T20 World Cup after succumbing to the spin of Mujeeb Ur Rahman, who propelled Afghanistan to a commanding 130-run victory in Sharjah.

Kyle Coetzer’s side had caused shockwaves by reaching the Super 12s, beating sixth-ranked Bangladesh en route, but struggled to contain Afghanistan, in their first international since the Taliban regained control of the country.

Najibullah Zadran’s dashing 59 from just 34 balls lifted Afghanistan to a tournament-high score of 190 for four before Mujeeb took centre stage with three top-order wickets in an over that left Scotland with no way back.

The masterful Mujeeb finished with career-best international figures of five for 20, starting Scotland’s remarkable slide from 28 without loss to 38 for six before eventually subsiding to 60 all out on a sticky night in the Gulf.

Leg-spinner Rashid Khan polished off the tail with minimal fuss, collecting four for nine as Scotland were finished off in 10.2 overs.

With Afghanistan boasting a vaunted spin attack, there were omens Scotland might struggle in the chase as their slow left-armer Mark Watt was the only bowler to stifle the opposition batters with one for 23 from his four overs.

There was no lack of endeavour from the Scots but Afghanistan hit the front early as Michael Leask’s only over – the second of the match after Afghanistan won the toss – went for 18.

There were sizeable contributions up the order from Hazratullah Zazai (44) and Mohammad Shahzad (22) in a 54-run stand for the opening wicket that laid the groundwork for Rahmanullah Gurbaz (46) and then Najibullah.

Rahmanullah cleared the boundary rope on four occasions, while Najibullah’s belligerent innings contained five fours and three mighty sixes, the last of which from the penultimate ball cleared the roof of the stadium.

He holed out the last ball to deep midwicket off Safyaan Sharif – who took two for 33 and was the only other bowler apart from Watt to go at less than 10 an over – but Najibullah had left Scotland with a mountain to climb.

Scotland had lost each of their previous six T20 internationals to Afghanistan, who had automatically qualified for this stage, but they made a bright start as George Munsey reverse swept Mohammad Nabi for four then six, taking advantage of the shorter square boundary on one side – 57 metres on one side as opposed to 73m on the other.

But the introduction of Mujeeb in the third over turned the tide, lighting up the stumps of Scotland captain Coetzer before beating the inside edge of Calum MacLeod first-ball.

There was no hat-trick but the 20-year-old had three wickets in five balls when Richie Berrington was rapped on the pad, with an appeal proving unsuccessful.

From that point forth, it was a procession. Matthew Cross edged behind in the only non-Scotland wicket to fall to pace, while Munsey (25) was cleaned up by Mujeeb, with Scotland losing the first six wickets for just 10 runs.

Rashid got into the action by trapping Leask in front while the probing Mujeeb had his first T20 international five-for after breaching the defences of Watt before Scotland fell away dramatically.