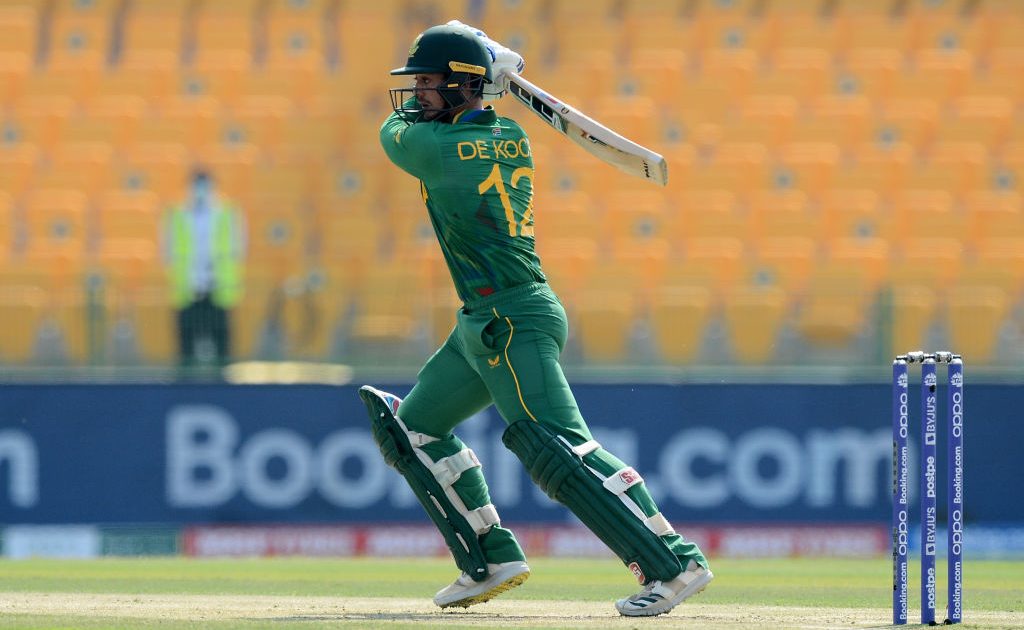 Quinton de Kock overshadowed South Africa’s victory over West Indies in the T20 World Cup after dramatically withdrawing from the fixture over his refusal to take the knee.

The Windies’ defence of their title looks to be in tatters after a second successive tournament defeat as the Proteas overhauled a target of 144 with eight wickets and 10 balls to spare in Dubai.

The contest itself became a mere subplot after De Kock had pulled out for “personal reasons”, just a couple of hours after Cricket South Africa issued a directive for all players to take a knee for the rest of the tournament.

A subsequent statement from CSA said it had “has noted the personal decision…not to take the knee” of De Kock, who has previously refused to take part in the gesture and said in June: “It’s my own, personal opinion.”

CSA added: “The board will await a further report from team management before deciding on the next steps. All players are expected to follow this directive for the remaining games of the World Cup.”

“Quinton is a big player for the team, not just with the bat, but the role he plays from a senior point of view, and not having that at my disposal as a captain was something I wasn’t looking forward to.

“In saying that, Quinton is an adult. He’s a man in his own shoes. We respect his decision. We respect his convictions. I know that he’ll be standing behind whatever decision that he’s taken.”

While some of his team-mates knelt or raised a fist ahead of their tournament opener against Australia on Saturday, De Kock did neither. He contributed just seven with the bat as the Proteas lost by five wickets in Abu Dhabi.

De Kock was replaced in the line-up by Reeza Hendricks, with Heinrich Klaasen taking on the wicketkeeping role as South Africa bounced back from Saturday’s loss to claim their first win of the tournament.

The Windies fared better with the bat than they did against England – when they were blown away for a measly 55, with Eoin Morgan’s side chasing down the total with six wickets and 11.4 overs to spare in Dubai.

Evin Lewis’ 56 from 35 balls helped to usher the defending champions to 143 for eight, but Hendricks’ 39 laid the groundwork for Aiden Markram (51 not out) and Rassie van der Dussen (43 not out) to get South Africa home.

The unbroken 83-run stand helped South Africa over the line with 10 balls to spare.