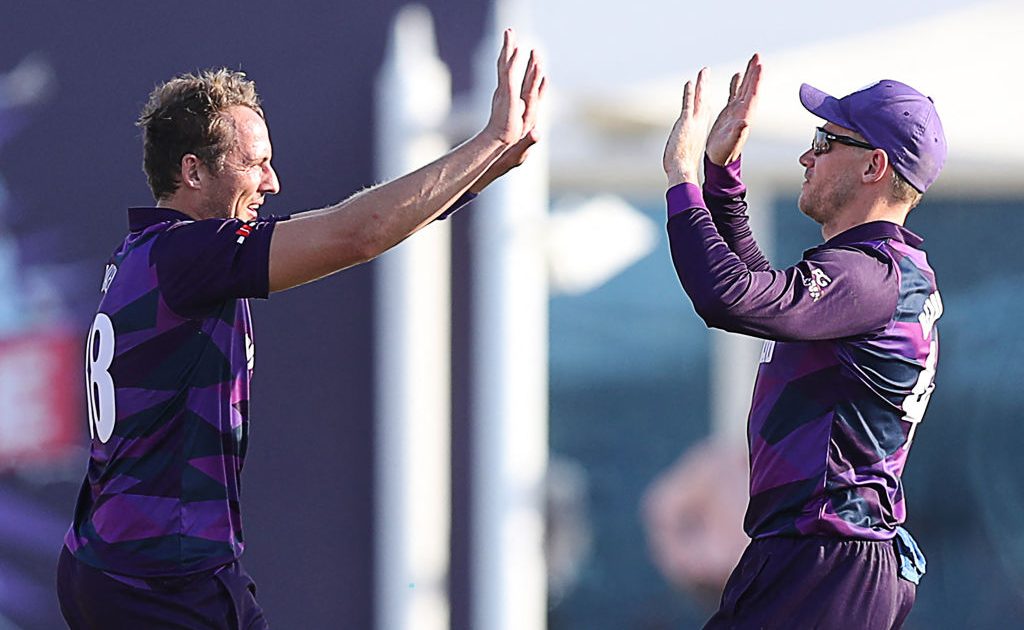 Scotland made it two wins from two at the T20 World Cup and took a big step towards the Super 12 stage as Richie Berrington and Josh Davey fired them to a 17-run win over Papua New Guinea.

Having upset Bangladesh in their opening fixture, the Scots did not take their eye off the ball as they condemned the tournament first-timers to an early exit in Oman.

Berrington was the star turn, striking 70 off 49 deliveries to push his side towards 165 for nine and later contributing a wonderful one-handed catch. Scotland should have scored more but lost six wickets in the last 11 balls of their innings, a rapid collapse that included four batters dismissed in Kabua Morea’s final over.

There was still enough scoreboard pressure to overwhelm PNG, with Somerset’s Davey claiming career-best figures of four for 18 as they were bowled out for 148.

Scotland chose to bat first but lost both openers cheaply, captain Kyle Coetzer bowled by a slower ball and George Munsey skying a top edge to make it 26 for two. Berrington and Matt Cross took charge of the rebuild and racked up a stand of 92 for the third wicket. At halfway the score was still contained at 67 but Scotland piled on another 42 in the next three overs to jump-start the scoring in style.

There was a steady stream of boundaries as the third-wicket pair sized up PNG’s spin-heavy attack, both batters adding a pair of sixes apiece, with Charles Amini treated particularly harshly.

Cross was looking for another maximum when Simon Atai dropped short and when he launched a catch straight to deep midwicket, he was furious with himself for giving it away after racing to 45 off 36 balls.

Berrington pushed on after passing fifty, finishing with six fours and three sixes, but the wheels came off at the death with just 19 runs and six wickets from the last three overs. Chad Soper got Callum McLeod and Berrington, the latter caught on the long-on ropes, before Morea rescued his otherwise modest figures by removing Chris Greaves, Davey and Mark Watt alongside Michael Leask’s run-out.

The optimism created by that fightback evaporated quickly as Scotland reduced their opponents to 35 for five in the powerplay. Davey prised out two in his new-ball spell – aided by Berrington’s one-handed grab at point to see off Atai – while Brad Wheal and Alasdair Evans picked up one apiece and Amini’s dreadful day continued with a sloppy run out.

Norman Vanua brought a sense of intrigue to what had seemed a foregone conclusion, coming in at number seven and swinging hard on his way to an entertaining 47. At one stage it looked as though he might inspire a remarkable lower-order fightback but Davey had him caught behind in the 18th over and returned to close things out with the final wicket, Soper feathering through to give wicketkeeper Cross a fifth dismissal.