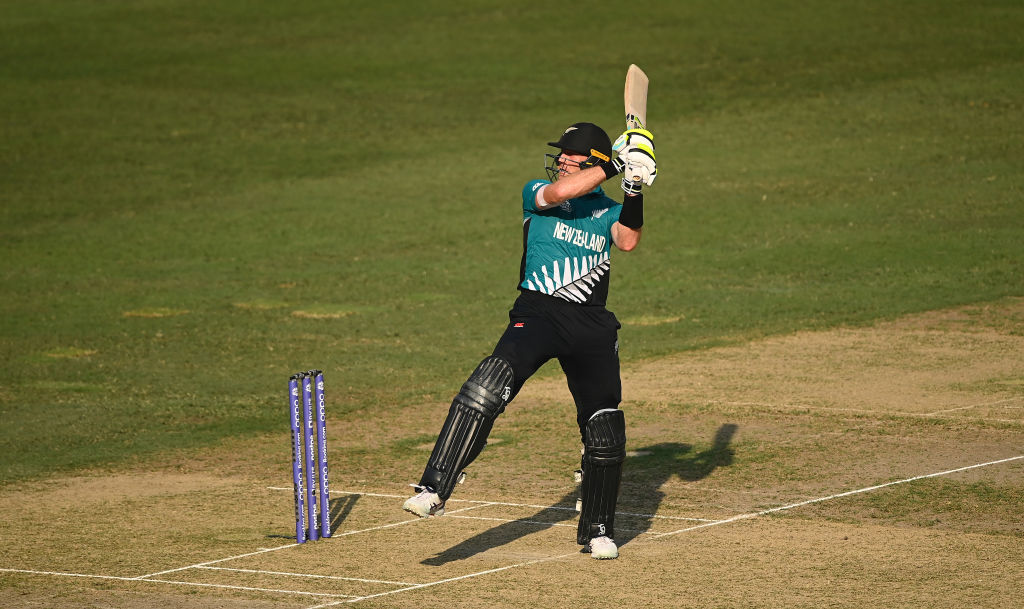 Scotland’s slim hopes of reaching the T20 World Cup semi-finals were ended as Martin Guptill’s superb 93 off 56 balls kept New Zealand’s own bid for a place in the knockout stages alive in Dubai.

Guptill became only the second batter after India captain Virat Kohli to go past 3,000 T20 international runs during a sparkling innings that contained six fours and seven sixes before fatigue set in on a scorching day game.

He was visibly suffering before holing out seven shy of a ton, but his efforts formed the backbone of New Zealand’s 172 for five, with Scotland restricted to 156 for five to lose their third Super 12s game in a row by 16 runs.

While this defeat confirmed their exit, with contests against India and Pakistan to come, Scotland were far from outclassed by the world Test champions as New Zealand captain Kane Williamson made a four-ball duck, caught down the leg side.

Safyaan Sharif was handed a memorable if fortuitous wicket in his two for 28, while Mark Watt continued to impress as he took one for 13 in a miserly four boundary-free overs, the only bowler able to contain Guptill.

Matthew Cross then clattered Adam Milne for five consecutive fours to give Scotland a sniff at what would have been one of the biggest wins in their history, but they were unable to maintain consistent pressure on the Kiwi bowlers.

Scotland, who have achieved their best result at a global tournament in getting to this stage, ultimately lost wickets at crucial stages of the chase, and Michael Leask’s 42 not out off 20 balls proved too little, too late.

Returning captain Kyle Coetzer was on 17 when he drove straight to Tim Southee, who took a sensational sliding catch to his right to account for George Munsey for 22 as he attempted a third six off leg-spinner Ish Sodhi in four balls.

Cross was unable to kick on from taking Milne to task, bowled through the gate for 27 off 29 balls, and the asking rate had climbed to more than 12 an over when Calum MacLeod was castled for 12 by Trent Boult after missing a ramp.

Richie Berrington skipped down the track to Sodhi but a big heave was sliced, leaving wicketkeeper Devon Conway to take a swirling catch, as the batter departed for 20 off 17 deliveries, with Scotland’s challenge petering out.

There was still time for Leask to thrill a sparse crowd by crashing Sodhi for six-four-four, while he thumped Southee for a big six to leave 26 from the last six balls, although a rescue act never seemed in the offing.

It was always going to be a tough ask for Scotland, who were bowled out for 60 by Afghanistan and limited to 109 for eight by fellow associate side Namibia, after some monstrous hitting by Black Caps opener Guptill.

Sharif trapped Daryl Mitchell in front and was then in dreamland when he snared Williamson in the same over, while Watt’s first ball after the powerplay left New Zealand on 52 for three as Conway got a tickle on a reverse sweep.

Guptill reached 3,000 T20 international runs with his first six off the expensive Alasdair Evans’ half-volley and found some support from Glenn Phillips, who contributed 33 in a 105-run stand for the fourth wicket.

Guptill went to a 35-ball fifty with a big six off Chris Greaves, which at 102 metres was the joint second longest of the tournament, and, while he continued to accelerate, it was evident he was feeling the effects of the heat.

Phillips and then Guptill were both caught in the deep from successive deliveries,, but the damage was done as New Zealand backed up their win over India on Sunday and remain firmly in the hunt for a top-two finish in their group.