Shaheen Shah Afridi is the talk of Dubai after Pakistan heroics 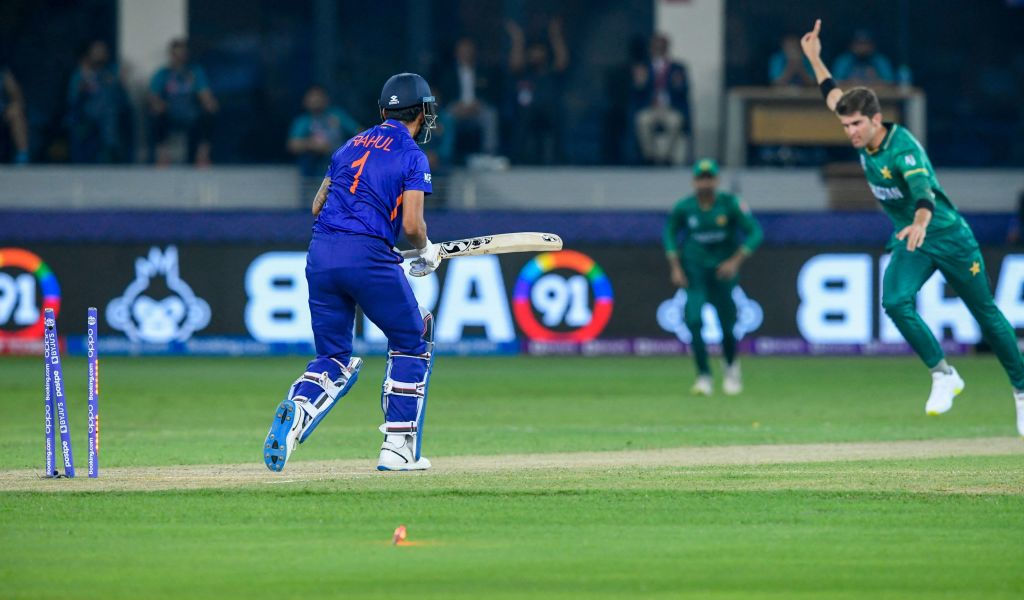 The stage was set. The Dubai International Cricket Stadium a sell-out. An explosion of colour, of passion, of adulation. Cricket’s biggest contest had arrived in Dubai.

For the past week or so in the UAE, the game has been a sideshow. Unbeknown to most around. But not today. The receptionist knew. The barista knew. And of course, the taxi drivers knew.

On the way to the ground, we shared a cab with fans travelling from London, Kuwait and Kolkata. Yes, this was India v Pakistan by name but those names had drawn a global crowd. Word on the street was that tickets were going for thousands of dirhams (100 dirhams = approximately £20) around town.

At the ground, a cacophony of noise intensifying as the masses rolled in. Officially, 38% of the UAE is made up of Indian expats with Pakistani expats making up 12.5%. When the respective national anthems came around, it became audibly evident that the ground was predominantly in favour of India.

Lights shining on Shaheen Shah Afridi. 21-years old and entrusted with the new ball. A measure of his ability and the threat of the unknown. The class and might of K.L Rahul and Rohit Sharma awaited. Over 10,000 T20 runs between them. Yet for all their experience in the shorter format of the game, their experience against the left-armer was minimal.

Bar a handful of overs in 2018 at the Asia Cup for Sharma, when Shaheen was just 18, neither of the openers really knew what was around the corner. A handsome face with a harmless demeanour, packaged with a weapon-like arm that can rattle any nation; not least a cricketing-mad nation of a billion plus and counting.

Rahul took guard as the crowd held its breath. Afridi steamed in. The first one swung a touch away from the right-handed and Rahul managed to stab it away. The second one nipped back and again Rahul got bat onto it but again, there was no run. With the third delivery, Rahul tucked it into the leg side and got a single. More importantly, he was safe and off strike.

For Sharma, the welcome was less welcoming. A searing yorker to say hello and consequently, goodbye. A nasty delivery at any time of the game, never mind first up. The kind described as unplayable. The man widely regarded as one of the most complete batters in the world, looking all at sea as Shaheen wheeled away in peak celebrappeal fashion.

For Shaheen, a 22nd wicket in his first over out of 61 innings. You can watch all the fours and sixes in the world but there is nothing quite as scintillating and mesmerising as witnessing a raw pace bowler burst through an opening pair.

For Rahul, the safety was short-lived. A jaffa to tear through his defences in the following over from Shaheen. The timbers shattered. Rahul cleaned up, playing all around it. A vicious delivery that had mouths left wide open not just in Dubai, but around the world, in utter awe of the visceral thrill of Shaheen and the spellbinding nature of his work. The sort of spell that grips you emotionally, regardless of where your allegiances lie. For Pakistan fans, the feeling that you just want to press pause and bottle up for the rest of your life. A wonderful artist providing quite magnificent sporting theatre.

“I don’t care what nick you are in, I don’t care how many runs you’ve got, you ain’t playing that!” said Nasser Hussain on commentary. Within minutes, the tone of the game had been set.

Shaheen would return towards the end to remove the captain and if the impact of his opening spell wasn’t already evident, the ruthless manner in which the Pakistani openers cantered towards the eventual target of 152 was enough to showcase the sheer value of the man from Khyber. Just 21-years of age and with the world at his feet.