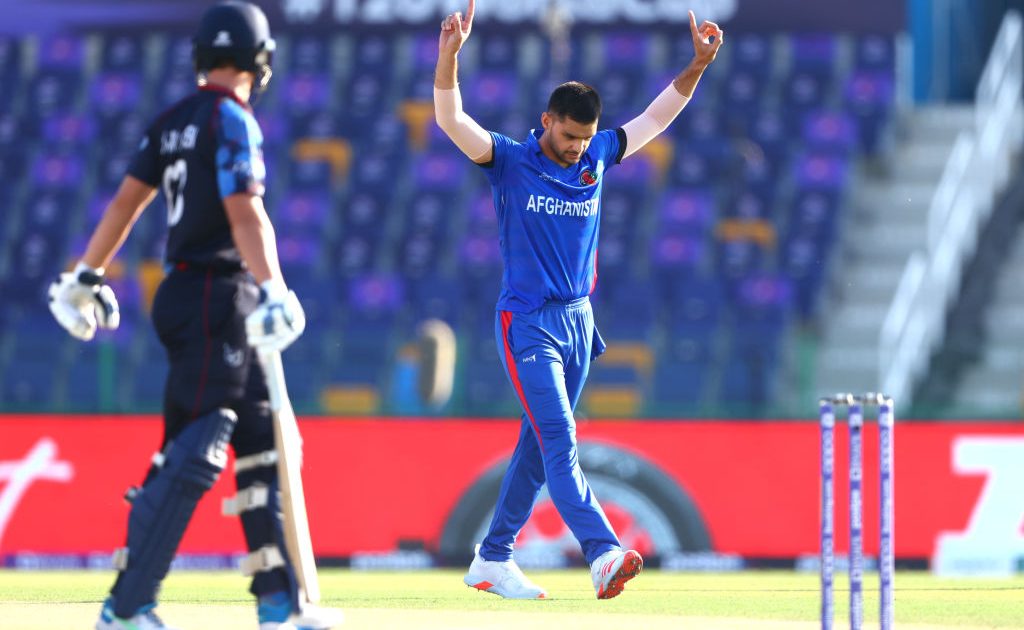 Afghanistan kept their hopes of an ICC Men’s T20 World Cup 2021 semi-final alive with a thumping 62-run victory over Namibia.

Mohammad Nabi’s side backed themselves to bat first in Abu Dhabi, posting 160 for five from their 20 overs with opener Mohammad Shahzad making 45.

In reply, Namibia never looked like chasing it down, losing wickets at regular intervals and ending 98 for nine.

For Afghanistan, it was a resounding response to their narrow defeat to Pakistan as they stayed second in Group 2.

Taking first use of the Sheikh Zayed surface, Afghanistan’s openers looked to target the left-arm seam of Ruben Trumpelmann that did such damage to Scotland in Namibia’s four-wicket win.

The fifth ball of the game was an overpitched delivery that Hazratullah Zazai climbed into and lifted over long-on for six.

Trumpelmann was taken out of the attack, returning in the fourth over, but the dynamic was the same as Hazratullah took him for two well-placed fours through the gully region.

Southpaw Hazratullah was at his ebullient best and smoked Jan Frylinck over the midwicket fence for six.

His partner Shahzad took longer to hit his straps but did so in the final over of the powerplay, swiping David Wiese through midwicket for four and then flaying him over third man for six.

Afghanistan go for it

When fielding restrictions were lifted, Afghanistan were 50 without loss.

JJ Smit’s nagging left-armers looked most threatening for Namibia and he broke the opening stand when Hazratullah picked out deep square leg, departing for 33 from 27 balls.

Skipper Gerhard Erasmus turned to the wildcard leg-spin of Jan Nicol Loftie-Eaton, whose first over went for two and ended with a ball that ripped past Shahzad’s outside edge.

The 21-year-old accounted for Rahmanullah Gurbaz in the tenth, trapping him in front for four at 69 for two.

Shahzad was still there and continued to pepper the midwicket boundary, before top edging a catch to Bernard Scholtz and heading back for a pivotal 45.

Asghar Afghan came to the crease and struck the ball well in his final T20I innings, despite losing his first partner Najibullah Zadran LBW to Loftie-Eaton.

He got down on one knee to smash Fylinck over long off for six and helped take a Smit over for 16 runs with two boundaries behind square.

Nabi, Asghar’s successor as Afghanistan’s T20 captain, offered his usual flurry at the finish with an excellent cameo of 32 from 17 balls, with five fours and a six off Trumpelmann.

Namibia’s chase faltered at the first when Craig Williams skied the fourth ball of the innings, bowled by Naveen-ul-Haq, comfortably caught by Usman Ghani.

Nabi fared well with the bat but less so with the ball at first as he was dispatched by Michael van Lingen for six over long-on and then by Loftie-Eaton through the arc for another maximum.

Namibia expected a trial by spin but it was Naveen’s seam that hurt them up front when Van Lingen fell for a clever slower ball and was caught at square leg for 11 at 16 for two.

And Gulbadin Naib’s medium pace dismissed Loftie-Eaton as he tried to swipe a cutter across the line only to be clean bowled.

The re-introduction of spin did the trick when Rashid Khan bowled Zane Green when he attempted a paddle sweep to the wrong ball, making it 36 for four.

Namibia could not build any kind of partnerships and lost two wickets in four balls when Hamid Hassan yorked Erasmus for 12 and then got Smith to snick behind for a duck at 56 for six.

Wiese and Frylinck stemmed the tide for a few overs without being able to score at a prolific rate, the latter trudging off after looping Naveen to Nabi at mid-off.

Another tame dismissal came as Pikky Ya France offered a simple return catch for Gulbadin but Wiese got a good one as he was bowled by a full Hassan delivery for 26.