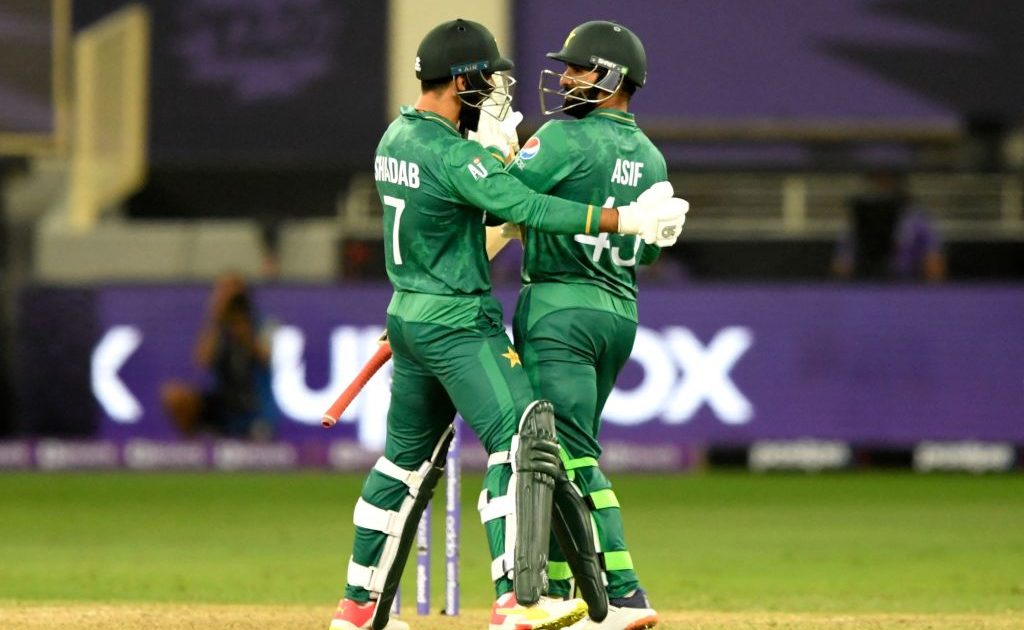 Asif Ali smashed four sixes in the penultimate over to help Pakistan make it a hat-trick of Super 12 victories as they handed Afghanistan their first defeat of the tournament in Group 2.

Asif blitzed 25 in just seven balls to ensure Babar Azam’s 51 did not go to waste as they successfully chased 148 to win by five wickets in front of a raucous crowd at the Dubai International Stadium.

Only some back-end fireworks from Afghanistan skipper Mohammad Nabi and Gulbadin Naib, who shared an unbeaten stand of 71 off 48 balls, gave their side a competitive total after they had slipped to 76 for six.

Asif had smashed 27 in 12 balls to help Pakistan beat New Zealand last time out and having trumped India in their opener, they have now cemented their spot on top of Group 2 and put one foot in the semi-finals of the ICC Men’s World T20 2021.

Nabi bucked the trend by choosing to bat in Dubai despite the dew and may have been regretting that call when Hazratullah Zazai was dismissed for a five-ball duck in the second over.

The Afghanistan opener’s top edge off Imad Wasim was safely pouched by Haris Rauf to give Pakistan an early breakthrough.

Mohammad Shazad struck the first boundary of the innings, but two balls later departed for eight after tamely chipping Shaheen Shah Afridi straight to mid-on to leave Afghanistan floundering at 13 for two.

Rahmanullah Gurbaz got off the mark in some style, planting Wasim into the stands with an eye-catching slog-sweep but should have been easily run out soon after only for Mohammad Rizwan’s wayward throw to spare his blushes.

Asghar Afghan also opened his account with a maximum in Wasim’s second over which went for 17, but the No.4 was soon walking back for 10 after Rauf took a sharp return catch, with his younger brother Karim Janat replacing him.

In what was now typical fashion, Janat got going with a six off Haris but could only watch on as Rahmanullah holed out off Afridi for 10 as Afghanistan lost four wickets inside an action-packed powerplay, finishing on 49 for four.

Janat’s promising partnership of 25 with Najibullah Zadran was cut short when the former holed out off Imad, who finished with two for 25, for 15 in the 10th over.

The theme of big hits and wickets continued when Najibullah sent Shadab Khan out of the park only for the bowler to exact immediate revenge, having him caught behind for 22 with a wrong-un.

Skipper Nabi was joined by Gulbadin and the pair spun the game on its head with a vital partnership of 71 off 48 balls, both batters finishing unbeaten on 35.

Gulbadin exploded into life in Hasan Ali’s 18th over, smashing a six and two fours on his way to single-handedly adding 19 of the 21 runs scored.

The 50 partnership came off just 36 balls and the carnage continued with Haris’ 19th over going for 15 runs as Pakistan leaked 36 runs in just 12 balls.

Shaheen’s final over cost just seven, even with a no-ball, but the damage was done, and Afghanistan finished on 147 for six, more than enough for their spinners to get stuck into.

Pakistan got off to a slow start in reply when Rizwan, eight off 10, was well caught on the boundary by Naveen-ul-Haq off Mujeeb Ur Rahman in just the third over.

Fakhar Zaman wasted no time in getting going as he and captain Babar guided Pakistan to 38 for one from the powerplay before Mujeeb returned to complete an excellent spell of one for 14 from his four overs.

Fakhar and Babar’s partnership reached 50 from just 39 balls as Pakistan took control of the chase with wickets in hand.

Babar’s class shone through as he made his way to 36 before danger man Rashid Khan, belatedly brought into the attack in the 11th over, thought he had him trapped LBW only for the decision to be overturned on review.

But DRS could not save the skipper’s partner Fakhar as Nabi had him pinned in front for 30 from the very next ball at the other end, curtailing the third-wicket partnership of 63 and leaving Pakistan 75 for two.

Rashid had his 100th T20 international wicket, the quickest to the milestone, for real when Mohammad Hafeez’s top-edge found Gulbadin to give Afghanistan a chance with the asking rate creeping over nine.

Babar should have been caught by Naveen off Rashid but the spinner had his man with the final ball of his spell of two for 26, a googly castling the Pakistan skipper as he surprisingly aimed a huge swipe into the leg side with 12 already having come from the 17th over.

Naveen bowled a sensational 18th over which cost just two runs during which he shelled an exceptionally tough reaction chance off Shoaib Malik but two balls later the veteran batter nicked one behind to depart for 19 with 24 still needed off 13.

Just as Afghanistan clawed their way in front, Asif had other ideas, belting four huge sixes off Janat in the 19th over to seal an incredible victory with six balls to spare.