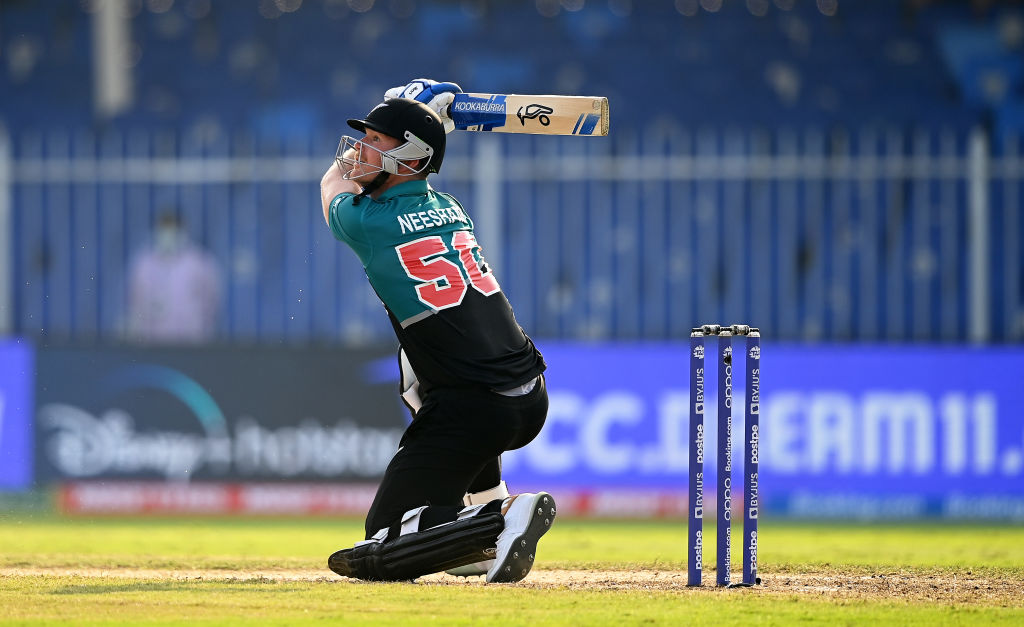 New Zealand moved above Afghanistan into second spot in Group 2 following a 52-run win over a spirited Namibia in Sharjah on Friday.

Namibia’s tidy start with the ball was undone as Glenn Phillips and Jimmy Neesham bludgeoned 67 in a decisive final four overs, finishing unbeaten on 39 and 35 respectively.

The Black Caps bowlers then kept their discipline to see their side home and leave them well placed to seal the second qualifying spot from Group 2 in the ICC Men’s T20 World Cup 2021.

Put in, New Zealand openers Martin Guptill and Daryl Mitchell walked out with the aim of building a large total knowing net run rate could be crucial to their qualification hopes.

The pair added 30 before Guptill sent a low catch to Ruben Trumpelmann at mid-off as David Wiese struck with the first ball of the fifth over.

Mitchell followed his partner back to the pavilion just after the powerplay as he misjudged a delivery from Bernard Scholtz and skied to Michael van Lingen at cover.

At the halfway stage of their innings, New Zealand were going at just over a run a ball as the Namibian bowlers kept the Blackcaps to 62 for two.

Kane Williamson’s side were further restricted by World Cup debutant Karl Birkenstock, whose two overs cost just nine, and New Zealand were 81 for three when the Black Caps skipper chopped on against his opposite number Gerhard Erasmus for 28.

Birkenstock and Erasmus then combined to dismiss Devon Conway, Erasmus with a pin-point accurate throw to the non-striker’s end where Birkenstock whipped off the bails in the nick of time.

Erasmus’s good work was then slightly undone as he conceded 14 off his final over, ending with figures of one for 22.

It was the same story for the usually tidy David Wiese, JJ Smit and Trumpelmann as New Zealand accelerated at the death to end on 163 for four, Neesham and Phillips putting on 76 for the fifth wicket.

In reply, Namibia started steadily as openers Stephan Baard and van Lingen went at a run a ball through the powerplay but just as van Lingen looked to be getting settled, Neesham bowled him for 25.

Baard went in the next over, bowled by Mitchell Santner, before Ish Sodhi got the key wicket of Gerhard Erasmus as Namibia fell to 56 for three at the halfway mark.

Crucially, Wiese was now at the middle and before long he saw a powerful drive off Sodhi deflected on to the bowler’s forehead; having been cleared to continue, the spinner saw his third over cost 15 as Wiese and Zane Green showed no mercy by each smashing him for six.

Wiese could do no more damage, however, as Tim Southee trapped him lbw and he had to depart for 16 off 17 balls.

While New Zealand had accelerated in the 17th over, Namibia stuttered as Trent Boult restricted them to just four runs before Southee got another wicket, Boult proving a safe pair of hands to dismiss Green for 23.

Boult then claimed two scalps in his final over as both Nicol Loftie-Eaton and Craig Williams had to depart for second-ball ducks.

Milne conceded just five from the final over as Namibia finished on 111 for seven to see New Zealand move to second and Kane Williamson became the Black Caps most successful T20I captain.